The Pyramids of Pepi I & Pepi II 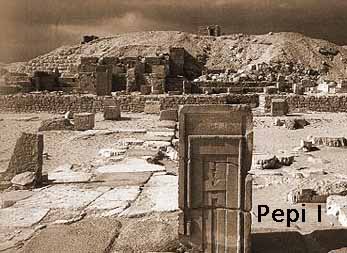 The pyramid of Teti's son Pepi I is almost completely destroyed due to stone raids throughout the centuries. Around 2500 stone blocks inside the building hold hieroglyphic texts. 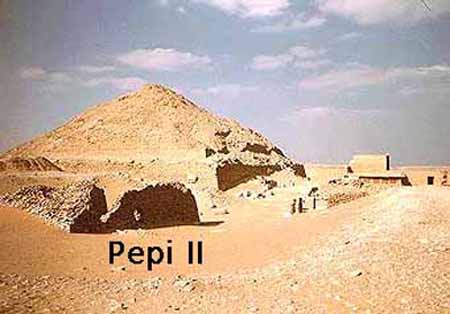 The pyramid of Pepi II, son of Merenre, is one of the best preserved pyramids in Saqqara. A mortuary temple, a causeway, a valley temple and three secondary pyramids are part of the burial site which is currently being excavated. 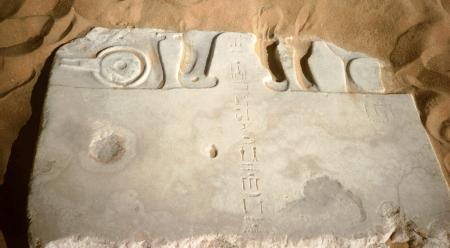 Amid the ruins of Pepi II's pyramid and temple complex lies an unusual stone block. At first glance the stone upon which the carving is etched seems normal enough and has many features we have seen many times before in Egypt. However, one carving in particular on this stone is quite unique and demands more attention. It seems to point to Egypt's long lost past, to a time well before Dynastic Egypt the Pharaohs we have come to know so well. Ancient times of which we now only have a handful of myths to point the way.

Pepi II's pyramid in South Saqqara was the last to be built in the best traditions of the Old Kingdom.

The pyramid is located on the the southern edge of the necropolis, about three miles south Djoser's Step Pyramid, which probably made it a source of inspiration for Middle Kingdom pyramid builders.

Perring investigated the pyramid, followed by Maspero who entered it in 1881.

However, not until 1926 was a systematic investigation initiated by Jequier, who continued his work until 1932. 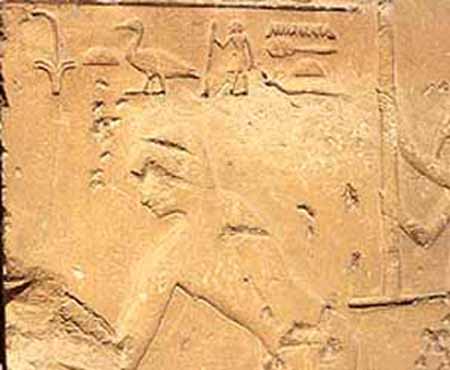 The valley temple of Pepi II is very different then those of some earlier kings. It was a wide structure, with an angular terraceopen on its east side and oriented northwest-southeast along a now non-existent canal. There were ramps and entrances at either end of the wide temple, and an entrance in the middle inline with the causeway. Within the valley temple, the front portion was a hall supported by eight pillars. 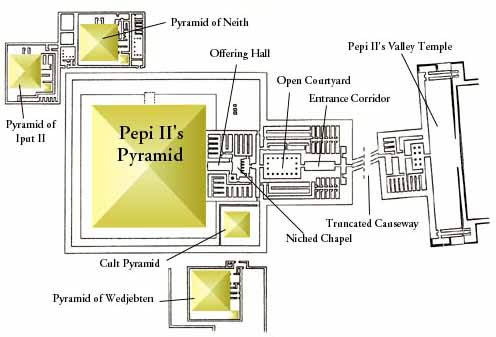 Fragments of the decorative theme have survived, and show the king being received by gods, a victory against Egypt's enemies, and a hunt in a papyrus thicket. A vestibule behind this pillared hall had a stairway leading to the valley temple's roof terrace. In this room were also the entrances into the side storage annexes of the valley temple, along with the entrance to the ascending causeway. The vestibule has a few fragmentary decorations, including a scenes of hippopotamus being hunted, and the transportation of a hippopotamus on a wooden sled.

The causeway connecting the valley temple to the mortuary temple took two turns and angled to the northeast. At the upper turn was a small room that functioned as a guard house. Scenes within the causeway depict the king as a sphinx and a griffin massacring prisoners and enemies of Egypt, as well as scenes showing processions of servants bringing offerings from the mortuary estates and various divinities approaching the ruler on his throne. Pepi II's mortuary temple is not unlike those of earlier 5th and 6th dynasty rulers, though it incorporates a few new features.

For example, after the causeway but before the entrance corridor are a large, and to either side of it, two small north-south oriented rooms.

According to Ricke, these symbolized important religious centers with the center room as Heliopolis, But the north room and Sais the southern room.

From here, a stairway lead to the temples roof terrace.

The entrance corridor lead, as usual, to an open, pillared, courtyard that was paved in limestone.

The walls of the courtyard appear to be undecorated. There were eighteen pillars of reddish quartzite.

One of these, on the northwest corner, survives. It is adorned with a scene of Pepi II and Re-Harakhty exchanging embraces.

The other pillars also featured the king with a god.

To either side of this outer section of the mortuary complex are storage annexes.

The transverse corridor between the inner and outer sections of the mortuary temple is noteworthy because it retains some of its decorative theme.

Here, we find actually a stylized model of a niche on the west wall, and on the east wall a scene of Pepi II's sed festival, the festival of the god Min, and the execution of a Libyan chieftain.

The chieftain is accompanied by his consort and son.

However, this last scene is ritualistic, and was also found in the mortuary temple of Sahure.

In the middle of the back wall of the transverse corridor directly behind the open courtyard, an entrance lead into the inner sanctum of the temple.

The entrance area is decorated with a scene depicting Pepi II being suckled by goddesses.

The floor of the inner sanctum is raised about a meter higher then the outer part of the temple.

Here, the first room encountered is the cult chapel, with its five niches, framed in red granite, for statues that originally were provided with narrow, double doors.

Significantly, the center niche, which is slightly larger then the others, contains the base of a life size royal statue.

It remains the only direct evidence we have that these ever present chambers were in fact statue niches. The niches are lined with pink granite.

Behind the chapel is the antechamber carree that once had a single reddish quartzite pillar.

Here the ceiling had an astronomical theme, decorated with stars.

On the walls we find scenes of courtiers bringing tribute, and above them separated by a row of stars, is Pepi II who is in the company of gods.

The north door of the chapel led to five storage annexes, while the south door lead to the offering hall.

However, before arriving in the offering hall there was a small vestibule and square, single pillared antechamber.

In this vestibule we find more scenes of the king suppressing disorder, slaying enemies and hunting wild animals.

Above the entrance to the offering hall in the antechamber is a scene of the king embracing the goddess Nekhbet and Anubis as a jackal.

There is also depicted as many as 100 deities and 45 officials receiving the king.

The offering hall had a vaulted ceiling and is decorated. Here, the king sits at an offering table with a list of sacrifices, sacrifice bearers, and men slaughtering sacrificial animals.

There are as many as 100 dignitaries and residents pictured bringing ducks, geese, quail, pigeons, gazelle, goats, antelopes, cattle, fruit wine, bear and bread.

Behind the king is depicted a figure with the symbol of raised arms on his head, the symbol of the king's ka. There was, of course, an alter and at the back of this room adjacent to the pyramid was a false door.

A doorway at the south end of the dividing transverse corridor opened into the pyramid courtyard, where the cult pyramid was located.

It was about 15.75 meters (52 feet) square. It has a t-shaped passage and a small chamber, all of which was left rough.

A door on the other end of the corridor lead to the main pyramid courtyard, where three depressions (basins) probably were meant to collect libation water.

Pepi II's pyramid is built much like those of his predecessors, using small pieces of limestone secured with a clay mortar for the core and fine white limestone for the casing.

The core consisted of five steps.

What we do not understand is why the pyramid itself was enlarged. It turns out that after the casing was laid and the north chapel built, a band of brick about seven meters wide was added around the pyramid at the level of the third layer of core blocks.

In order to complete this work, the north chapel and enclosure wall were both torn down, though the wall was built back a little farther from the pyramid.

This mudbrick work did not rise above the height of the perimeter wall.

Edwards suggested that this addition might have been to strengthen the pyramid after it was damaged by an earthquake, but the mudbrick was really not strong enough to be used for this purpose.

It may have been added in order to strengthen the lower levels of casing.

Others have suggested that the builders wished the pyramid to resemble the Hieroglyph for "pyramid", with a band across the base, or even that it may have symbolized one of his Sed festivals.

There is nothing particularly unusual about the subterranean section of the pyramid. The initial corridor descends into a vestibule, at which point everything becomes level. In this area of the pyramid were found alabaster and diorite vessel fragments along with the golden blade of a small, rounded knife which may have been used in the ritual pyramid closing. The vestibule opens up into a second corridor where soon the barrier would have been encountered. The barrier was made up of three huge, portcullis slabs of granite. After the barrier, the corridor continues until it leads into the antechamber. From here, the plan takes a 90 degree right turn into the burial chamber.

From the level corridor on, the walls are adorned with pyramid text. The one exception is the back wall of the burial chamber behind the sarcophagus, which is decorated with motifs of a stylized palace facade. In this room, at the head and foot ends of the sarcophagus, were false doors, painted green and topped with the name plate of the king. Both the ceilings of the antechamber and burial chamber are gabled, and decorated with an astronomical theme of stars on a dark background.

It should also be noted that within the ruins of the complex were found many statues of prisoners reminiscent of the complexes of Teti, Djedkare and Pepi I, though here many more were found. 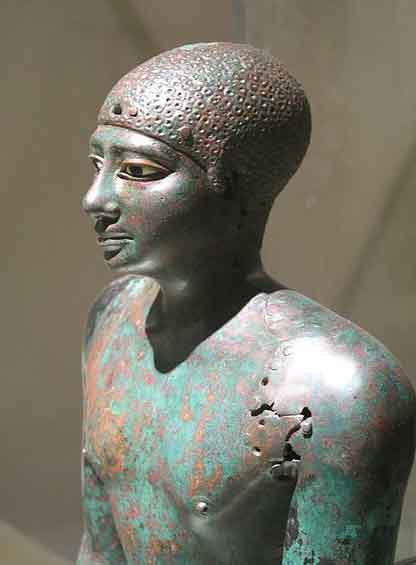 Pepi I and Pepi II