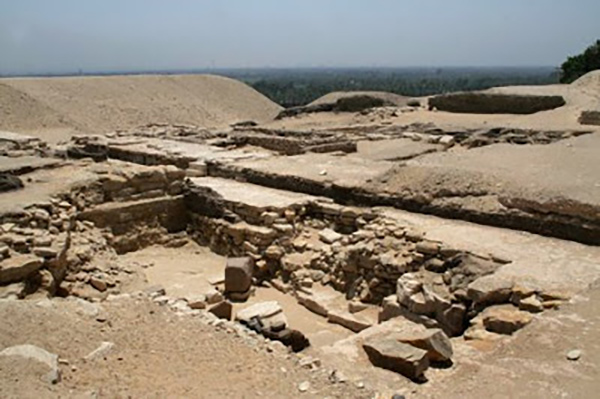 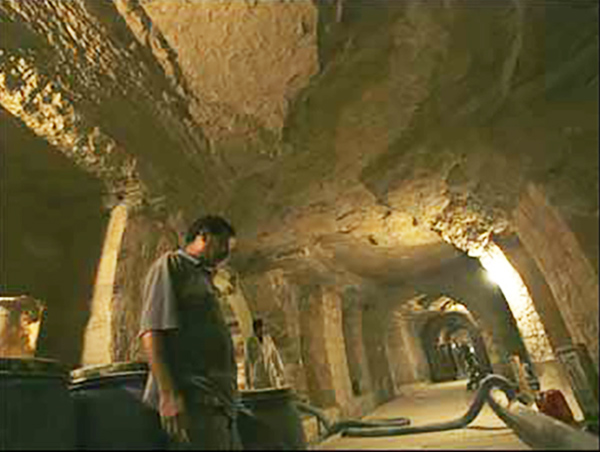 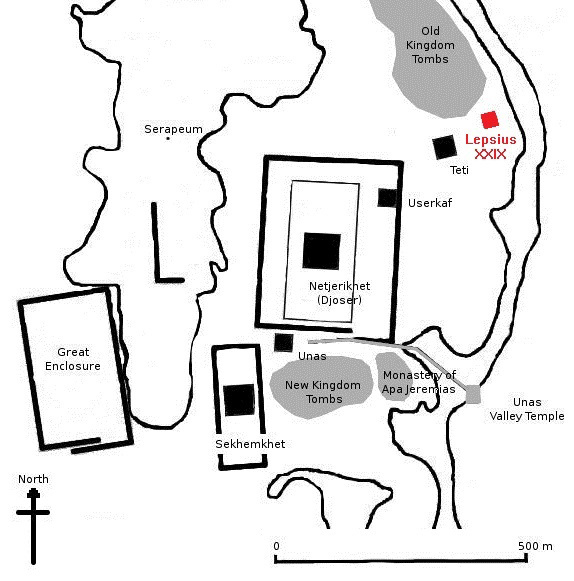 The Headless Pyramid is an ancient Egyptian pyramid in Saqqara. It was most likely built by the Fifth Dynasty Pharaoh Menkauhor.

In 1842, German archeologist Karl Richard Lepsius mentioned it among his finds at Saqqara, referring to it as number 29 and calling it the "Headless Pyramid" because only its base remains. But the desert sands covered the discovery, and no archeologist since has been able to find Menkauhor's resting place.

Karl Richard Lepsius, who visited Egypt in 1843 provided a first brief description and catalogued it as number XXIX (29) in his pyramid list. Gaston Maspero entered the underground chambers in 1881. A first, very brief, and unsystematic excavation of the ruins was made in 1930 by Cecil M. Firth. Then the ruins were once again covered with sand.

In 1994, Jaromir Malek proposed that the Headless Pyramid should be the long-sought pyramid of Merikare (a pharaoh of the Tenth Dynasty) since it was known that this pyramid had to be somewhere in northern Saqqara near to the pyramid of Teti; the Headless Pyramid was a perfect candidate, also because there were no other pyramids of the Fifth Dynasty in its immediate vicinity. However, most scholars believed that the owner of the pyramid was Menkauhor instead, because the priests appointed for the funerary cult of this king were buried to a great extent in northern Saqqara.

On June 5, 2008 Egyptian archeologists unveiled a 4,000-year-old pyramid that was believed to have been discovered by an archeologist 165 years earlier and not seen since. The pyramid appears to have been built by King Menkauhor, an obscure pharaoh who ruled for only eight years. The site is 12 miles south of Cairo.

The style of the pyramid indicates it was from the Fifth Dynasty, a period that began in 2,465 B.C. and ended in 2,325 B.C. That would put it about two centuries after the completion of the Great Pyramid of Giza. Another proof of its date, Hawass said, was the discovery in the pyramid of a granite lid of a sarcophagus of the type used at that time.

The pyramid had a length of approximately 52 m (171 ft) and was probably aligned with the pyramid of Teti. Virtually nothing is left of the superstructure, hence its name. On the north side lies the entrance to the underground chamber system, which was sealed by two granite portcullises. A broken sarcophagus lid was found in the burial chamber.

The pyramid's base was found after a 25-foot-high mound of sand was removed over the past year and a half. The rectangular base, at the bottom of a 15 foot-deep pit dug by workers, gives little indication of how imposing the pyramid might have been. Heaps of huge rocks, many still partially covered by sand and dust, mark the pyramid's walls and entrance, and a burial chamber was discovered inside.

The partial ceremonial procession road unveiled yesterday dates to the Ptolemaic period from about 310 B.C. to 30 B.C. It runs alongside Menkauhor's pyramid, leading from a mummification chamber toward the Saqqara Serapium, a network of underground tombs where sacred bulls were interred.