Necropolis of Deir el-Medina on the West Bank at Luxor


Deir el-Medina lies in a small valley between the western slope of the Theban mountain and the small hill of Qurnet Murai. It was the workers village where craftsman and other lived who actually constructed and decorated the tombs on the West Bank at Luxor (ancient Thebes). The artisans who lived in this community built their tombs only a few dozen meters from their town on the heights that overlook the village. The excavated burials here include those of Sennedjem (TT1), a foreman named Inerkhau (TT 229 and TT 359), Pashedu (TT 3), Nakhtamen (TT 218), a sculptor named Ipuy (TT 217), Nebenmaat (TT 219) and Nakhtamen (TT 335). They were all artists during the Ramesside period and were well known for their work on the West Bank. Apparently they paid considerable attention to their own tombs and the arrangement of their necropolis. 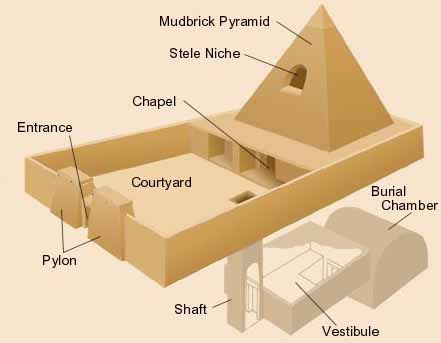 In the beginning these were personal tombs, but over time their function was extended to also receive the remains of other family members. However, the structure of the tombs in the necropolis was fairly uniform. They built their tombs almost as if there was a building code requiring specific architectural elements. Customarily, these tombs had an entrance through a small pylon into one or two open courtyards. At the rear of the last courtyard was a small chapel with an entrance made of unburned mudbrick and toped by a small pyramid that occasionally had several rooms excavated in the rock. 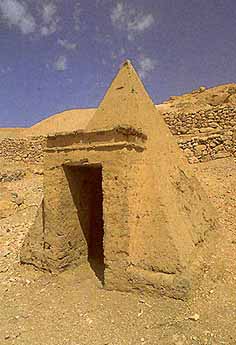 In every instance we know of, on the back wall of this chapel was a niche where a statue of the deceased and a stele inscribed with the text of the hymn to the sun was housed. This chapel was intended for the worship of the deceased. Even those of not of royal blood attempted to keep their name known and therefore so too their soul.

The deceased was buried along with a rich set of funerary objects in a burial chamber excavated below ground level. The underground chambers were reached by way of a steep stair shaft that was either located in the courtyard or one of the interior rooms.

The burial chambers had vaulted ceilings and often beautiful decorations, usually of the deceased and his family engaged in their everyday activities.. Other scenes depicted ritualistic activities such as the embalming of the deceased or the Opening of the Mouth ritual. Inscriptions from the Book of the Dead also often adorned the walls.