Pyramid of Khendjer at South Saqqara 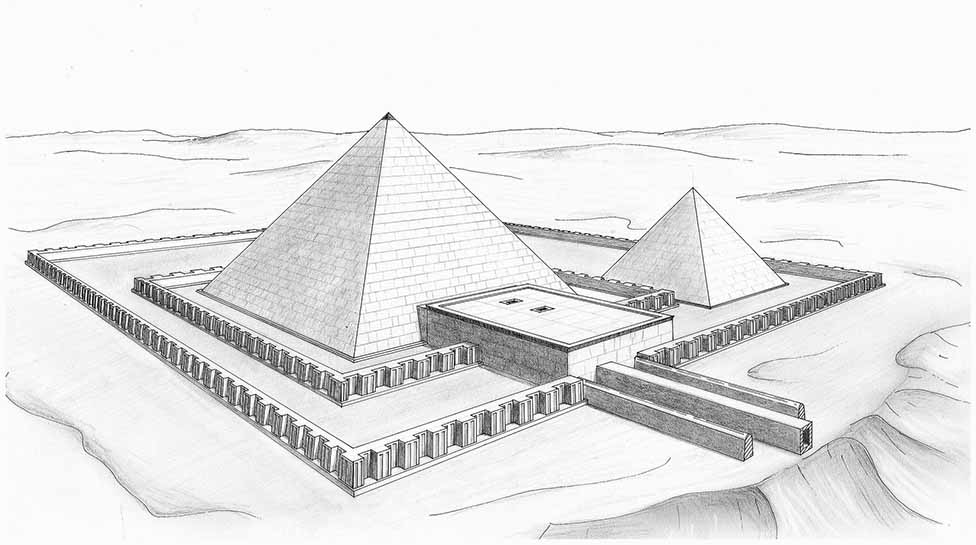 Located between the pyramid of Pepi II and and the pyramid of Senusret III in far South Saqqara only a short distance from Cairo are the slim remains of the only 13th Dynasty Pyramid to be completed. This is the mortuary complex of Khendjer, who's name is vaguely Syrian or Palestinian. His odd name mean's "boar", and he may have been a leader of foreign troops serving in Egypt. The pyramid was discovered by Jequier in 1929.

The complex was enclosed by both inner and outer walls. The inner wall was made of limestone and as often found during this period, had niches and panels. However, this wall apparently replaced an earlier wavy wall. Stradelmann believes that the wavy wall design may have been a less costly substitute used to save resources, or perhaps when time was limited. The outer wall was made of mudbrick.

The mortuary temple was located on the east side, and transverses both inner and outer enclosure walls. Typically, this would provide for the outer section of the temple to be placed outside the inner wall, with the inner sanctuary on the inside of the inner wall. The only remains of the temple are parts of the pavement and bits of reliefs and columns.

While the pyramid was once about 37.35 meters (123 ft) tall, today it is reduced to no more then about one meter (a little over three feet), a sad but common result of using a mudbrick core. Over the mudbrick core was placed backing stones and casing of limestone, which, when quarried by stone robbers, left the core to disintegrate. A mostly whole, but fragmentary pyramidion was found on the east side. This pyramidion is now restored. The cartouche of King Userkare is inscribed on one side. This is believed by many to have been the king's throne name. There was also a north chapel built out to the inner enclosure wall and against the pyramid face. It was raised on a platform reached by two stairways. In its north wall was a yellow quartzite false door. This was highly unusual, for the closest wall to the pyramid was the south wall. Fragments of reliefs from this chapel have been recovered, and reveal standard scenes of offering. 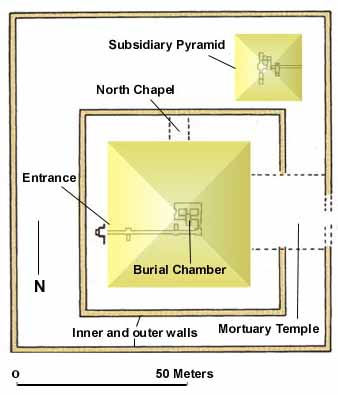 It is possible that the pyramid was earlier suppose to have a somewhat different substructure plan, for their is an aborted stairway in the southeast corner that was later blocked. Another possibility is that the entrance would have lead to a "ka" burial chamber that was never finished. The actual entrance to the pyramid is somewhat towards the southern end at the base of the west face. Here, we find a not untypical arrangement of a stairway leading down into a barrier (portcullises) room. The barrier was never engaged, but this might not mean that there was no burial. Another 39 step stairway lead to a second barrier room on the same axis. This chamber was once closed by a double leaf wooden door. From here, the corridor continued for a short distance before taking a 90 degree left turn to the north. Apparently, the burial chamber could be reached from here, or from corridors that continued along the northern and western sides of the burial chamber. These corridors changed levels no less then four times.

The burial chamber was built prior to the construction of the superstructurein in a ditch just beyond the second barrier. Also like some other pyramids of this period, the burial chamber was in fact a monolithic block of quartzite in which niches were formed to hold the king's coffin and canopic chest. These niches were covered by a roof formed of two huge quartzite slaps. The method of sealing the burial chamber was the same as that found in Amenemhet III's pyramid at Hawara and in the south Mazghuna pyramid. The blocks that held the northern of the two cover slabs rested on sand filled shafts. When the sand was drained through channels, the huge slab was lowered into place.

Between the inner and outer enclosure walls on the northeast corner of the complex is the only known 13th Dynasty subsidiary pyramid. This pyramid has a simple substructure consisting of a corridor and closing system. A stairway and ramp lead to a corridor and through two barriers before arriving at a central antechamber. There, two burial chambers are found to the north and south. Both contained quartzite coffers, but the lids were propped on blocks and the coffins never apparently used. This is thought to have been a queen's pyramid, but it is not impossible that it could have been a small cult pyramid instead. Also within the enclosure walls, Jequier discovered shaft tombs most likely belonging to other family members. Here, the excavators also discovered a juglet of late Yehodiyya ware, and another flared neck jar of mid to late 13th Dynasty date similar to others found at Haraga.