The Pyramid Complex of Iput I 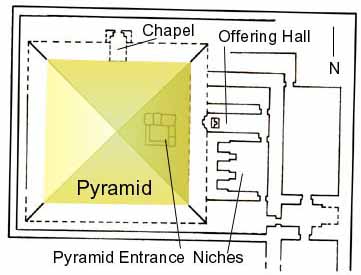 Iput I was probably Teti's (6th Dynasty) principle queen, and may have legitimized his ascent to the throne of Egypt. She was probably the daughter of Unas (5th Dynasty) and the mother of Teti's successor, Pepi I. Her pyramid was discovered by Loret at the beginning of the 20th century, and later investigated by Firth, with Gunn's assistance, in the 1920s. Dr. Hawass, one of the current living legends of Egyptology, continues this investigation.

This complex, located about 90 meters north of Teti's pyramid, has no valley temple, causeway or cult pyramid.

This complex has a number of unusual features, The mortuary temple, located on the east side of the pyramid, has a far from standard floor plan. It was entered from Teti's pyramid to the south. The entrance hall had four limestone pillars followed by an antechamber with two pillars. There is also a pillared courtyard. The inner part of the temple consisted of an offering hall and rather then a complete chapel, three deep niches for statues of the queen just south of the offering hall. North of the offering hall was a storeroom.

The Offering hall originally had a limestone false door on the wall facing the pyramid. In front of the false door was a pink granite altar that was inscribed with, "Queen mother (of the pyramid) 'Pepi's splendor is enduring'". This represents the oldest proof of a connection between a queen and the cult of the king.

Dr. Hawass indicates that there are military scenes, unusual for an Old Kingdom monument, engraved in the pillared entrance hall and that in the inner sanctuary are reliefs of offering bearers, sacrificial scenes and a ritual performance held at the palace.

It should be noted that this is not the only mortuary temple of this queen. Another has been found for her in the ancient city of Coptos, a center for the fertility god Min, in southern Egypt.

The pyramid itself has a three step core. As with other contemporary pyramids, it has a north chapel but the entrance to this pyramid is unique, with a vertical shaft that began at the level of the second layer of the core. Because of this, we believe the pyramid was originally meant to be a mastaba and was later transformed into a pyramid probably after her son, Pepi I, ascended to the throne. However, all that is left of the pyramid is the original mastaba section.

The whole of the complex is surrounded by a limestone enclosure wall.

A limestone sarcophagus and fragments of a cedar coffin were found in the burial chamber, along with the bones of a middle aged woman, though Dr. Hawass tells us that it was that of a younger woman. Other items of funerary equipment originally found in the pyramid include five limestone canopic vessels, a gold bracelet and fragments of a necklace, an alabaster headrest, a small alabaster tablet with the names of the seven sacred oils, copper utensils, models of alabaster vessels and other items. The canopic jars are curious because there were usually only four to a set, meaning that the fifth must belong to some other burial.

Discovered by Victor Loret in 1898, until fairly recently, the pyramid of one of Teti's other wives, Khuit, was though to be a mastaba. It was again investigated by Maragioglio and Rinaldi in the 1960s ,but then, in 1995, Dr. Hawass excavated the remains once more and confirmed that it was indeed a small pyramid. Its investigation is is still ongoing. Her pyramid sits just next to that of Ipu I's north of Teti's complex.

The mortuary temple sits in front of the east wall of the pyramid. Little of this apparently has been excavated, but the previously excavated offering hall has the usual false door and altar. Offering bearers decorated the walls.

Evidence of the solidly constructed underground compartments of the pyramid, along with a pink granite sarcophagus, has led Hawass to believe that Queen Khuit, like Iput I, had a significant status.