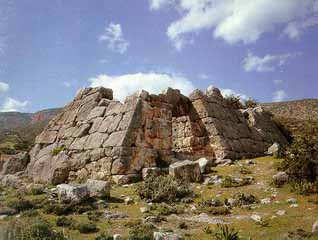 There are more than 16 pyramids spread over Greece. The oldest one is the Pyramid of Hellinikon.

At the South-eastern edge of the plain of Argolid, near the springs of the Erasinos river (nowadays 'Kephalari') and on the main arterial road which in antiquity lead from Argos to Tegea and the rest of Arcadia and Kynouria, there is a small structure at present known as the Pyramid of Hellenikon.

The Academy of Athens has published results of dating the Hellenikon pyramid ( 9-2-1995). Dating measurements were performed by the Laboratory of Archaeometry at Dimokritos Resarch Institute in Athens and by the Nuclear Dating Laboratory of the department of Physics at the University of Edinbourgh in Scotland.

The method of Optical Thermoluminescence was employed to date samples taken from the pyramid. It was determined that the pyramid was erected at about 2720 B.C.

There in no clear evidence as to the use of pyramids in Greece in antiquity. Archeologists believe that they are memorials or observation-communication towers (phryctoriums). During the later years of Antiquity, the ''Pyramid'' was considered as a burial monument , a ''polyandreion'', while nowadays there is no doubt that it was a fort of the type of small strong-holds which controlled the arterial roads and which are known from other regions of the Argolid.

The pyramid at Hellenikon has the shape of a tour with its external sides sloping and surrounding a rectangular building of total dimensions 7,030 by 9,070 m. These external walls, which rise with a gradient of 60o up to 3,500 m high become vertical to in order to support the floors of the building. The main entrance of the monument is situated at its eastern side, that is the side which is turned towards the bay of the Argolid. From inside this gate a narrow corridor which leads to a smaller entrance, opened on the southern wall of the main space, a square room with sides about 7 m long. This monument is built entirely from the gray limestone of the district with large blocks in a trapezoidal and partially polygonal system.