The Faiyum, a fertile area situated in a depression west of the Nile river used to be swampland 3,500 years ago. As it was not far from the Middle Kingdom capital city it was used as burial grounds by Sesostris II and Amenemhet III. 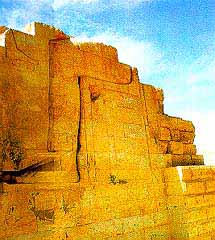 
Located on a rocky elevation, the pyramid was built of limestone and unburned mudbrick. The limestone blocks were used as star-shaped retaining walls, gaps were filled up with bricks of clay - a unique way of construction. The monument was finally faced with limestone. A system of shafts leads to the granite-faced burial chamber that holds a sarcophagus of pink granite. The once rich-equipped tombs of the princesses are situated on the south side of the pyramid. Mastabas were found in the north and as well as the Queen's pyramid in the east, the valley temple was located in the west.

Farther west lies the former settlement "Kahun," one of very few pyramid camps to be found in Egypt.


The Pyramid of Hawara 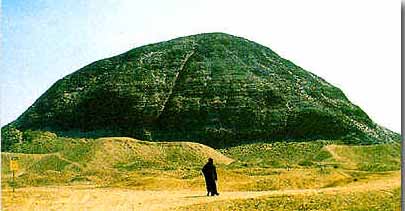 
This is the last big pyramid to be built in Egypt. It was built by Amenemhet III who had given up his plans of being buried in his first pyramid in Saqqara.

All ancient geographers and historians reported on the vast mortuary temple south of the monument which was called "Labyrinth" by the Greek. The temple must have been of an enormous extent. It is said to have had about 3,000 chambers on two floors. Today, however, most of its remains are covered with sand.

Herodotus claimed to have counted three thousand rooms in the pyramids funeral complex.

Herodotus visited the pyramid during the 5th century B.C. and described it as follows:

"The Labyrinth has 12 covered courts -six in a row facing north, six south. Inside, the building is of two stories and contains 3,000 rooms, of which half are underground, and the other half directly above them. I was taken through the rooms in the upper story, so what I shall say of them is from my own observation, but the underground ones I can speak of only from report, because the Egyptians in charge refused to let me see them, as they contain the tombs of the kings who built the Labyrinth and also the tombs of the sacred crocodiles.

"The upper rooms, on the contrary I did actually see, and it is hard to believe that they are the work of men; the baffling and intricate passages from room to room and from court to court were an endless wonder to me, as we passed from a courtyard into rooms, from rooms into galleries, from galleries into more rooms, and thence into yet more courtyards. The roof of every chamber, courtyard and gallery is, like the walls, of stone. The walls are covered with carved figures, and each court is exquisitely built of white marble and surrounded by a colonnade." He went on to write, "It is beyond my power to describe. It must have cost more in labor and money than all the wall and public works of the Greeks put together - though no one would deny that the temples of Ephesus and Samos are remarkable buildings. The Pyramids too are astonishing structures, each one of them equal to many of the most ambitious works of Greece; but the Labyrinth surpasses them."