While everyone knows of Egypt's great pyramids, many less significant examples dot the Egyptian landscape. Scattered along the Nile from Seila, which is on the edge of the Fayoum Oasis, down south to Elephantine Island at Aswan are seven of Egypt's smallest step pyramids. They date from the second half of the 3rd Dynasty to as late as the early 4th Dynasty. There are likely others that remain undiscovered, or now completely ruined. Though today largely discounted, some researchers have even attributed all of these small pyramids to a single ruler, Huni, the last ruler of the 3rd Dynasty, who probably at least built the one located on Elephantine Island.

They are very different then the later, larger pyramids, having no internal chambers, nor any underground structures. Among them, only the pyramid in Zawiyet el-Meiyitin was not built on the west bank of the Nile. The purpose of these pyramids is a matter of dispute among Egyptologists, though without any chambers within or below, they could probably not have been true tombs. Nor has any evidence of a funerary cult been found near these pyramids, though some believe they might have been centotaphs (fake tombs) of queens. Others believe they might have been shrines connected with the myth of Horus and Seth, or perhaps predecessors of the later sun temples, while still others believe they represented the primeval mound on which life was created. In fact, we may never completely understand their purpose, unless other evidence is uncovered. 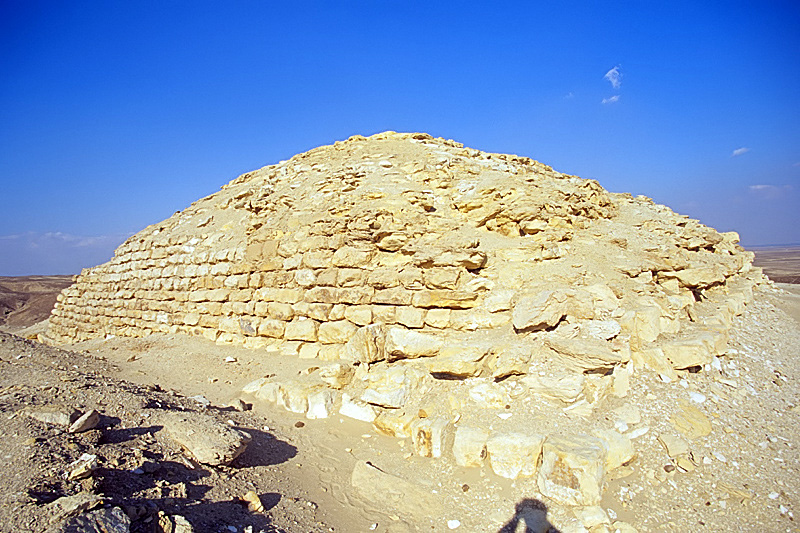 The Pyramid of Seila is one of a group of seven small step pyramids which are very similar to one another, along with the Edfu South Pyramid, the Pyramid of Elephantine, the Pyramid of El-Kula, the Pyramid of Naqada, the Pyramid of Saujet el-Meitin, and the Pyramid of Sinki. These pyramids were all built far from the major centres of Egypt and very little is known about them. The pyramid is located on an outcrop between the Faiyum Oasis and the Nile valley, about 6 km north of the motorway from Wasta to Faiyum. Its builder may have been Snefru, the founder of the Fourth dynasty. It was discovered in 1889/1890 by Flinders Petrie and revisited in 1898 by Ludwig Borchardt. 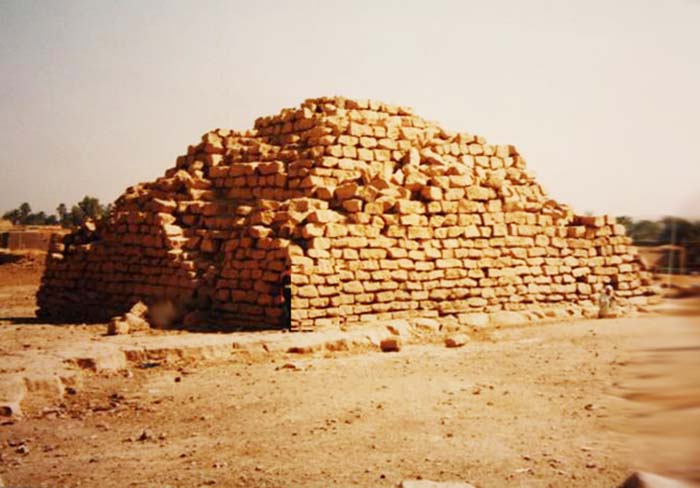 In 1837, Perring and Vyse first investigated the three step Kula Pyramid, which is located near the village of Naga el-Mamariya about six kilometers north of ancient Hierakonpolis. At that time, the ruins stood about twelve meters tall, but is now about ten meters tall and 294 meters square at the base. Perhaps because it is the best preserved of these small pyramids, it was again investigated by Henri Edouard Naville, who made a sounding on its northwest corner, at the end of the the nineteenth century, and again investigated by a Belgian team led by Jean Capart in 1929. Similar to the other small step pyramids, it is built of rough pieces of limestone bound by clay, mud, sand and small chunks of limestone. Its corners are oriented to the four cardinal directions, with its west side paralleling the Nile. 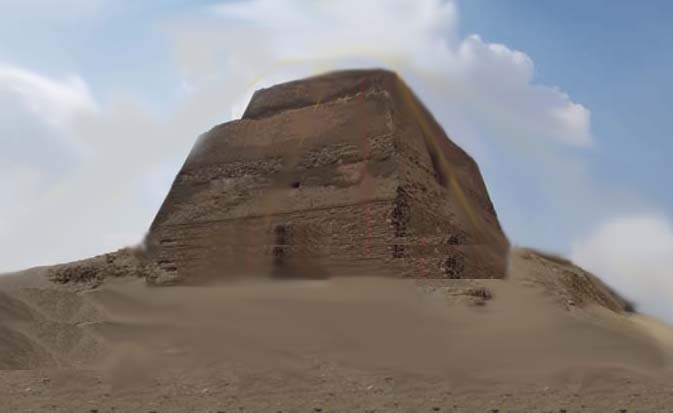 The Pyramid of Elephantine is part of a group of seven very similar small step pyramids, along with the pyramids at Edfu South, el-Kula [de], Naqada, Saujet el-Meitin [de], Seila, and Sinki [de]. All of these were built far from the main centres of Egypt and are very poorly understood.

The Pyramid of Elephantine is located in the northwest part of the Old Kingdom city on the south end of the island of Elephantine in the Nile. The structure was discovered in 1907, but it could only be identified as a pyramid after excavations by the German Archaeological Institute in 1978Đ79.

The pyramid originally would have had three steps. Today it is 5.1 metres tall, but the original height would have been between 20 and 24 cubits (10.46 - 12.55 m). To deal with the irregular ground level, the pyramid was built on a square platform, which measured 23.7 metres on each side. The sides of the pyramid itself were 18.46 metres long. The building is oriented parallel to the west bank of the island, which leaves it 17ˇ off north, to the west.

The pyramid consisted of a core structure which was surrounded by two layers of stone with a thickness of four cubits. Locally sourced pink granite was used as a building material. The substructure is made from large hewn blocks, with a mixture of Nile mud and sand for mortar. For the actual pyramid, unhewn granite blocks were used and particularly hard loam mortar was used to hold them together. No chamber system exists. On the north side of the structure is a cut near the middle, which was made by the 1909 French excavation team led by Henri Gauthier.

On their discovery in 1907, the remains of the pyramid were initially mistaken for part of the city wall. This interpretation was seemingly confirmed by the discovery of a granite cone near the pyramid with an inscription of the Pharaoh Huni, naming him as the builder of a fortress (according to a more recent reading, as the builder of a palace). Another interpretation considered the structure as the remains of a putative temple of Yahweh. Herbert Ricke, finally, interpreted the substructure as a royal palace. Only with the excavations of Gunter Dreyer in 1978/9 could it be clearly shown to be a pyramid.

The builder and the purpose of the pyramid are unknown. Gźnter Dreyer und Werner Kaiser considered it and the other pyramids named above to be a building project of Huni, the last ruler of the 3rd Dynasty. This proposal was based solely on the suggestion that the aforementioned granite cone was directly related to the Pyramid of Elephantine.

It has been suggest that Huni's successor Sneferu (c. 2670-2620 BC), the founder of the Fourth Dynasty, was the builder of all seven step pyramids. Speculation about the function of the structure ranges from a representation of the royal power to a depiction of the Benben, a symbol of the political and religious unity of the land, or the cenotaph of a royal wife. 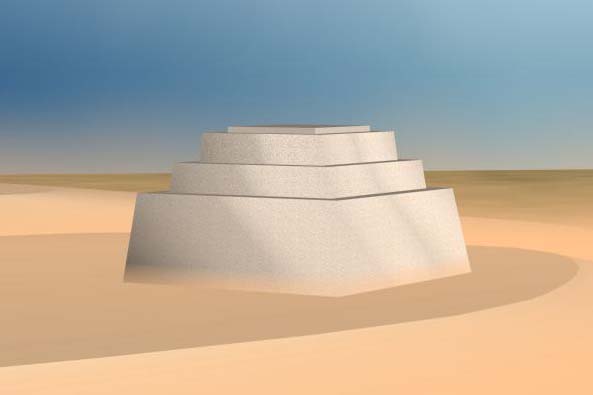 The Pyramid of Naqada, also called the Pyramid of Ombos, is part of a group of seven very similar small step pyramids, which were all erected far from the major centres of Egypt and about which very little is known. It is located about 300 metres north of the ruins of the ancient site of Ombos, near the modern city of Naqada in Upper Egypt. The first (and so far only) excavation was undertaken in 1895 by Flinders Petrie and James Edward Quibell.

The pyramid at Naqada, investigated by Petrie and Quibell in 1895, is unique in that its southwest corner lies over a pit, though the pit appears to have no connection to the pyramid. We have no evidence to suggest why it was built over the pit, or even if the pit preceded the building of the pyramid. It may have been dug by robbers attempting entry into the pyramid. Otherwise, this pyramid is almost identical to the one at Kula. Like the other small pyramids, the structure is simple, made of rough limestone bound by a mortar of clay and sand, and its east side is aligned with the Nile river. It originally had three steps and a base of 22 meters.

The pyramid measures 18.39 metres on each side and currently is about 4.5 metres tall. It is not oriented to true north, but 12ˇ to the northeast - in parallel with the course of the Nile. The pyramid consists of a core which measures about 5.75 metres on each side, around which three layers of roughly hewen stone were placed. The structure may have originally consisted of three steps. Locally sourced limestone was used as the building material. Under the southwest corner, Petrie discovered a grave measuring 1.25 by 2.00 metres, which very likely does not belong to the pyramid. It is much more likely that it is a secondary burial.

The builder and purpose of the pyramid are unknown. This pyramid and six others are considered a building project of Pharaoh Huni, the last ruler of the Third Dynasty. 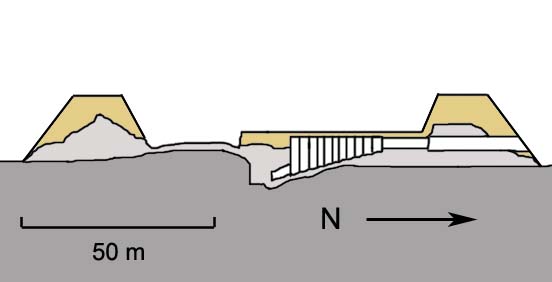 The pyramid of Khui is an ancient Egyptian funerary structure datable to the early First Intermediate Period (2181 BC - 2055 BC) and located in the royal necropolis of Dara, near Manfalut in Middle Egypt and close to the entrance of the Dakhla Oasis.

It is generally attributed to Khui, a kinglet belonging either to the 8th Dynasty or a provincial nomarch proclaiming himself king in a time when central authority had broken down, c. 2150 BC. The pyramid complex of Khui included a mortuary temple and a mud brick enclosure wall which, like the main pyramid, are now completely ruined

Due both to the ruined state of the structure and to the building's atypical architecture, Kamal believed it to be a huge mastaba while Weill thought it was a pyramid. Even today, in spite of the fact that the building is commonly considered to be a pyramid - and possibly a step pyramid - it is not possible to determine with certainty which type of tomb it was, and one cannot exclude that it was indeed a mastaba.

No name of the owner was found on the pyramid site; however excavations of a tomb located immediately south of the pyramid yielded a stone block with a relief bearing the cartouche hat is Khui, the nomen of an hitherto unknown pharaoh. The block could come from the mortuary temple of the pyramid complex, traces of which may have been discovered North of the pyramid. However, the identification of Khui as the owner of the complex, although commonly accepted, is still unproven.

he remains of the structure today looks similar to the first step of a step pyramid however, as pointed out above, it remains impossible to ascert that the structure was a pyramid. Furthermore, it is unclear whether the structure was completed or not. The ground plan of the main structure is rectangular and measures 146 metres (479 ft) x 136 metres (446 ft). The mudbrick walls of the pyramid are slanted inwards and are up to 35 metres (115t) thick. This large shell, whose corners are rounded with a radius of curvature of 23 metres (75 ft), surrounds an empty inner space which was probably filled by sand and gravel.

Considering these values, if the building really was a step pyramid, it would have had a base larger than that of the famous Step Pyramid of Djoser, while in the case of a mastaba, it would have exceeded in size the already considerable Mastabet el-Fara'un of Shepseskaf.

The rectangular burial chamber is located 8.8 metres (29 ft) meters under the ground level and measures 3.5 metres (11 ft) x 7 metres (23 ft). Its walls are made of roughly worked limestone blocks, presumably taken from a nearby, older necropolis of the 6th Dynasty.

The hypogeum was found completely empty during the excavations and was certainly robbed and nearly destroyed in antiquity. Consequently, it is impossible to say if anybody had indeed been buried here. The structure of the burial chamber bears many similarities with that of Mastaba K1 of Beit Khallaf, dating back to the 3rd Dynasty.

On the North side of the main structure, the ruined remains of a building were found, which may belong to a mortuary temple originally part of the pyramid complex. However, the remains are not sufficient to obtain a reliable reconstruction of the temple. Remains of a portion of a perimeter wall of mudbricks were also found, but they run in an area that is now under the modern village of Dara