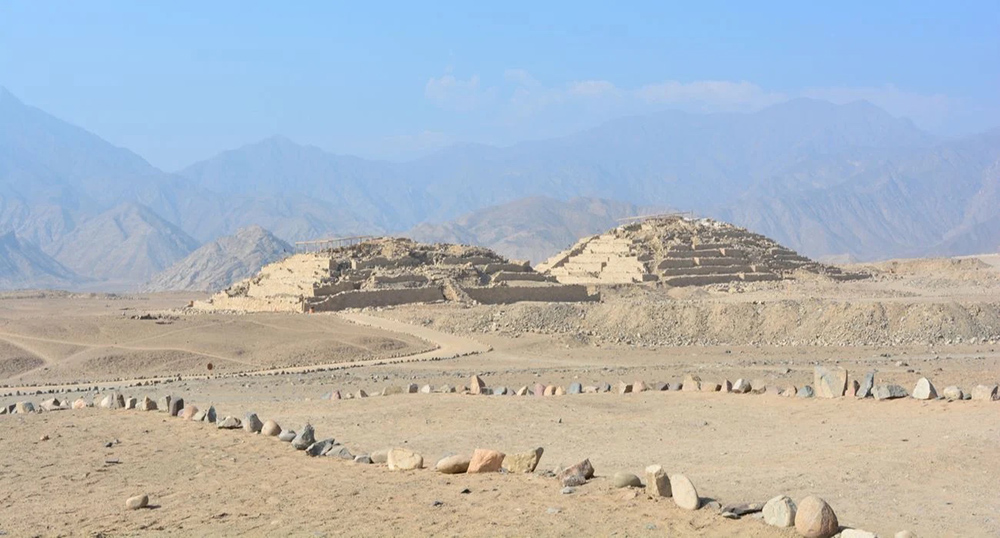 Relatively speaking, the Incas are recent history. One unfortunate consequence of the fame of the Incas is that they tend to crowd out the long and rich history of the region with its many kingdoms and civilizations that went before. Some pre-Inca cultures were incorporated into the Inca Empire, while others were ancient history by the time the Incas appeared on the scene.

The oldest city now known in the Americas is that of Caral. It flourished at around the same time as the Egyptian pyramids were being built. The ruins of 'Sacred City of Caral-Supe' or simply 'Caral,' is a reminder of just how old the history of what is today Peru really is. Another ancient pre-Inca city in the Peruvian desert to explore is Chan Chan. Peru is a country with a very rich history.

Caral is considered both the oldest (known) city in the Americas and one of the oldest in the whole world. It history stretches back around 5000 years rivaling the age of Ancient Egypt and its pyramids. No other site in the Americas has been found with Caral's diversity of monumental buildings and ceremonial and administrative functions.

As is understood now, Caral could be thought of as the cradle of Andean civilization - and eventually the Incas. It appears that Caral was the model urban design that was subsequently adopted by Andean civilizations over the following four millennia. 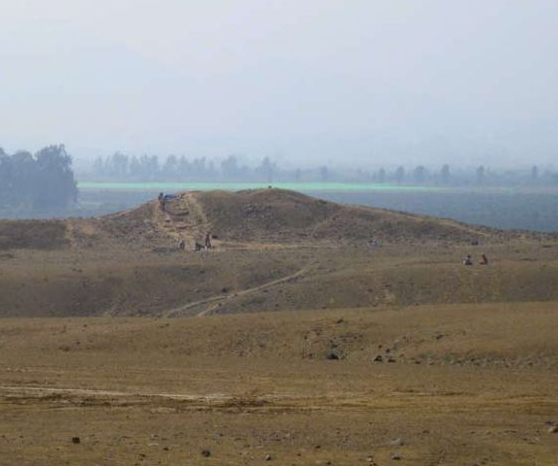 An ancient astronomical alignment in southern Peru has been discovered by researchers between a pyramid, two stone lines and the setting sun during the winter solstice. During the solstice, hundreds of years ago, the three would have lined up to frame the pyramid in light. The two stone lines, called geoglyphs, are located about 1.2 miles (2 kilometers) east-southeast from the pyramid. They run for about 1,640 feet (500 meters), and researchers say the lines were "positioned in such a way as to frame the pyramid as one descended down the valley from the highlands."

Archaeologists have discovered a pyramid in southern Peru, built between 600 B.C. and 50 B.C. ago, would have aligned with two stone lines and the setting sun during the winter solstice. Here, a 3D model shows the event that happened at the Cerro del Gentil pyramid during the winter solstice. The two stone lines frame the pyramid with the sun setting directly behind it. This alignment may have had cosmological significance for the people who lived there.

An ancient astronomical alignment in southern Peru has been discovered by researchers between a pyramid, two stone lines and the setting sun during the winter solstice. During the solstice, hundreds of years ago, the three would have lined up to frame the pyramid in light. The two stone lines, called geoglyphs, are located about 1.2 miles (2 kilometers) east-southeast from the pyramid. They run for about 1,640 feet (500 meters), and researchers say the lines were "positioned in such a way as to frame the pyramid as one descended down the valley from the highlands." Using astronomical software and 3D modeling, the researchers determined that a remarkable event would have occurred during the time of the winter solstice. "When viewed in 3D models, these lines appear to converge at a point beyond the horizon and frame not only the site of Cerro del Gentil where the pyramid is, but also the setting sun during the time of the winter solstice. 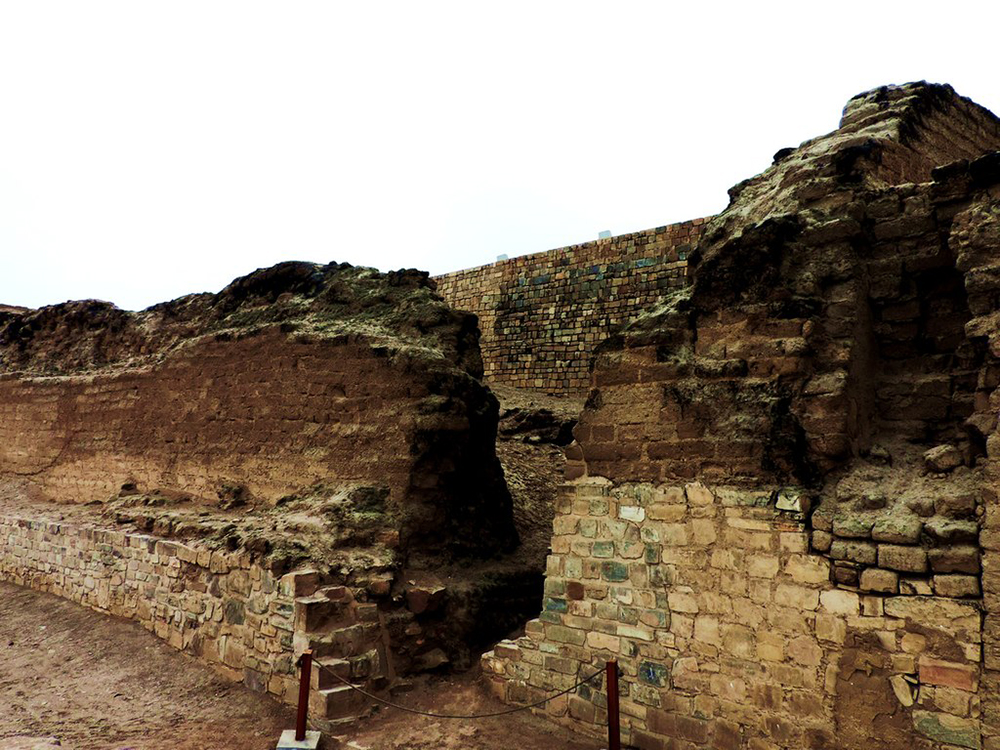 Remnants of at least ten pyramids have been discovered on the coast of Peru, marking what could be a vast ceremonial site of an ancient, little-known culture. In January construction crews working in the province of Piura discovered several truncated pyramids and a large adobe platform. Officials from Peru's National Institute of Culture (INC) were dispatched to inspect the discovery.

Last week they announced that the complex, which is 2 miles (3.2 kilometers) long and 1 mile (1.6 kilometers) wide, belonged to the ancient Vicus culture and was likely either a religious center or a cemetery for nobility. The Vicus was a pre-Hispanic civilization that flourished in Peru's northern coastal desert from 200 B.C to 300 A.D. and is known for its decorated ceramics. Experts say little is known about the culture, because its sites have been heavily looted over the years. "We found several partial pyramids, at least ten," said Cesar Santos Sanchez, chief archaeologist for INC's Piura division. "We also found a large adobe platform that we speculate could have been used for burial rituals. But we cannot know without further testing."

Skull Fragments: The platform, measuring 82 feet (25 meters) by 98 feet (30 meters), was found alongside one of the larger pyramids in the complex. Another of the larger pyramids contained some artifacts as well as bone fragments from a human skull. The fact that the skull fragments were found several meters below the surface, indicating a deep grave that took much time to dig, prompted researchers to theorize that the individual buried there had high social status. 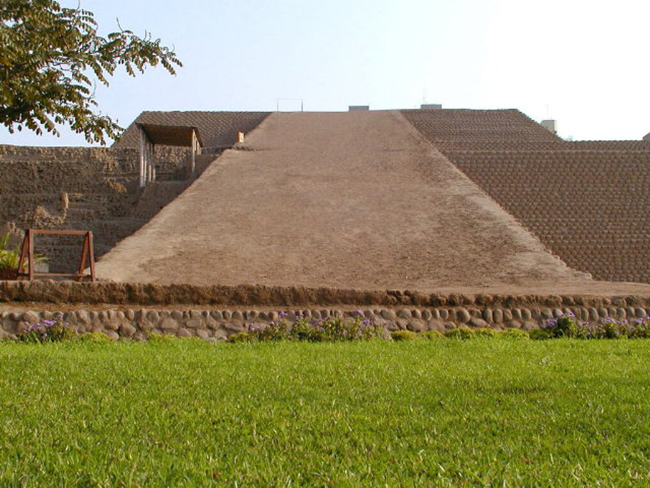 Called Sugar Loaf ruins by the Spaniard conquistadores, this ritual & funeral pyramid was built in the year 200 BC and had a glorious life till 500 AC. Its construction technique employed thousands of hand made corn grain like adobe bricks, is located in the middle of San Isidro district. Has a small site museum and a wonderful 360Ľ city view from the top. Recently has been illuminated. As with other Peruvian Pyramids and others around the world it was used as a place to - worship Gods and Goddesses, perform rituals at equinoxes and solstices, and other ceremonial rites of passage. 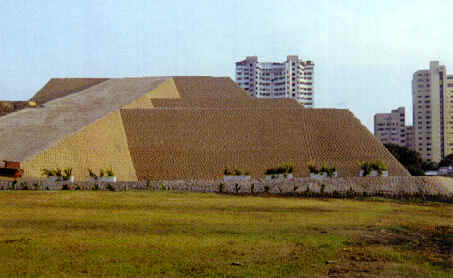 This imposing monument has remained impervious to the ravages of time, and modern civilization and stands surrounded by the asphalt jungle. The two-story construction is made of adobe with a steep ramp leading to the upper level. Archaeological excavations have unearthed mummies on display with ancient objects inside the on-site museum. 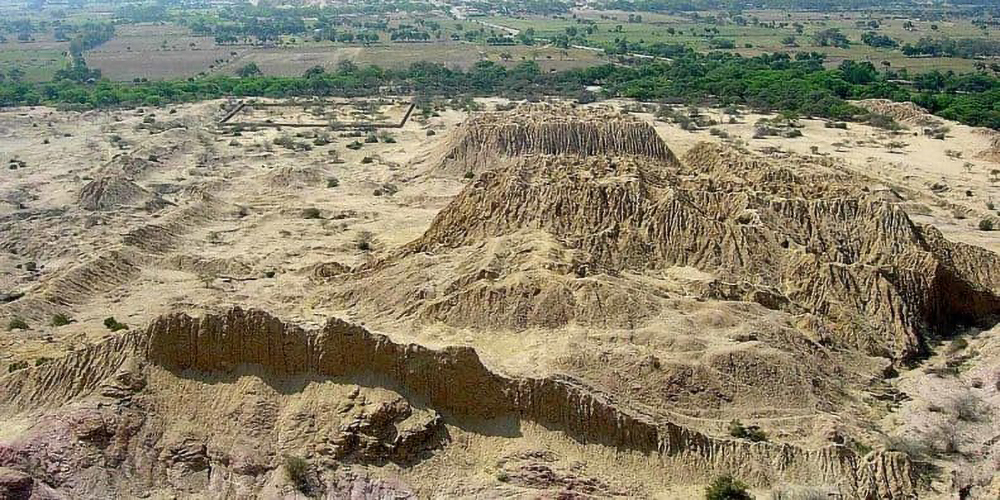 Tścume is a pre-Hispanic site in Peru, south of the La Leche River on a plain around La Raya Mountain. It covers an area of over 540 acres (220 ha) and encompassing 26 major pyramids and mounds. The area is referred to as Purgatorio (purgatory) by local people.

The site was a major regional center, maybe even the capital of the successive occupations of the area by the Lambayeque/Sican (800-1350 AD), Chimu (1350-1450 AD) and Inca (1450-1532 AD). Local shaman healers (curanderos) invoke power of Tucume and La Raya Mountain in their rituals, and local people fear these sites. The vast plains of Tucume are part of the Lambayeque region, the largest valley of the north coast of Peru. The Lambayeque Valley is the site of scores of natural and man-made waterways and is also a region containing the remains of about 250 decaying and heavily eroded mud-brick pyramids.

Rumors of a vast hoard of gold prompted famous Norwegian scientist and explorer Thor Heyerdahl to investigate the area around Tucume in northern Peru. The result was the archaeological discovery of 26 pyramids. Forty tombs pre-dating the arrival of the Spaniards were opened, and enough Inca and Chimu artifacts unearthed to justify the building of a museum at Tucume. Four burial chambers in the 600 meter long Huaca Larga pyramid were excavated. Inside the burial chambers the bodies of 16 female weavers sacrificed to the gods. The area near Tucume consists of 26 massive pyramids which suggest a civilization that flourished in the now endless desert for perhaps more than 1,500 years. 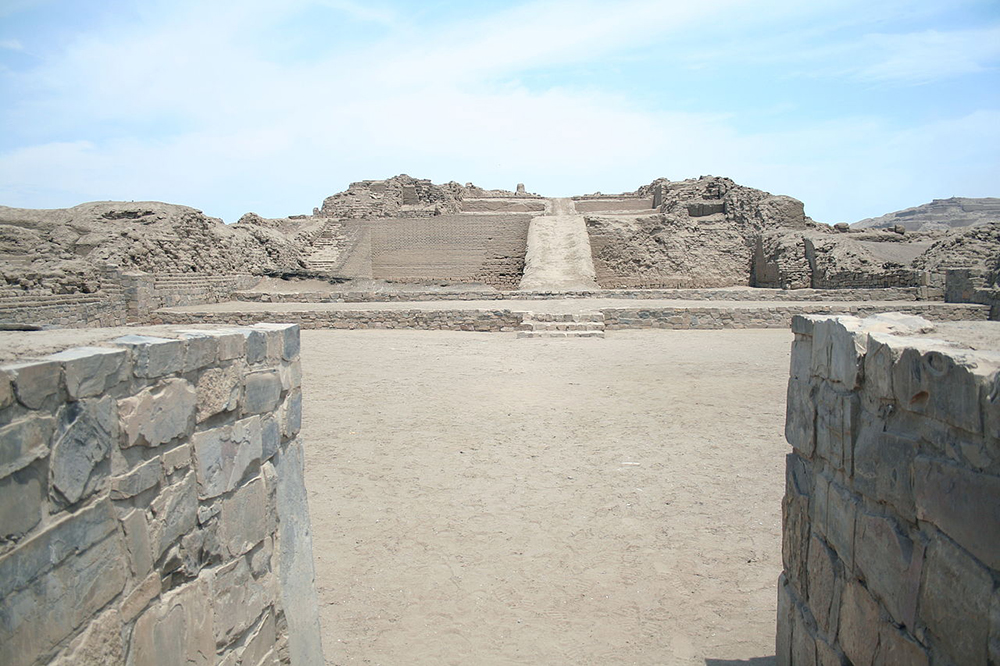 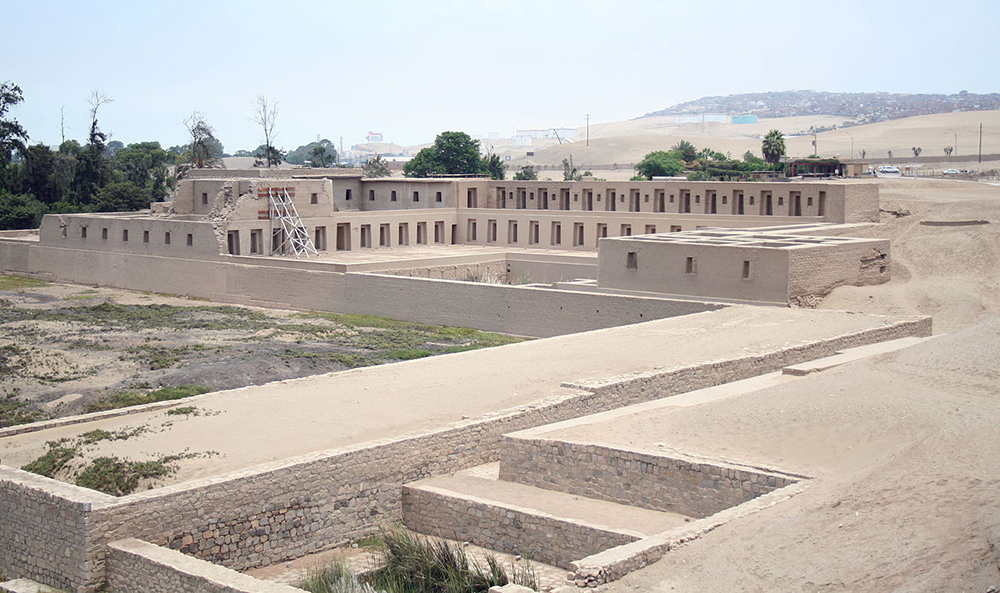 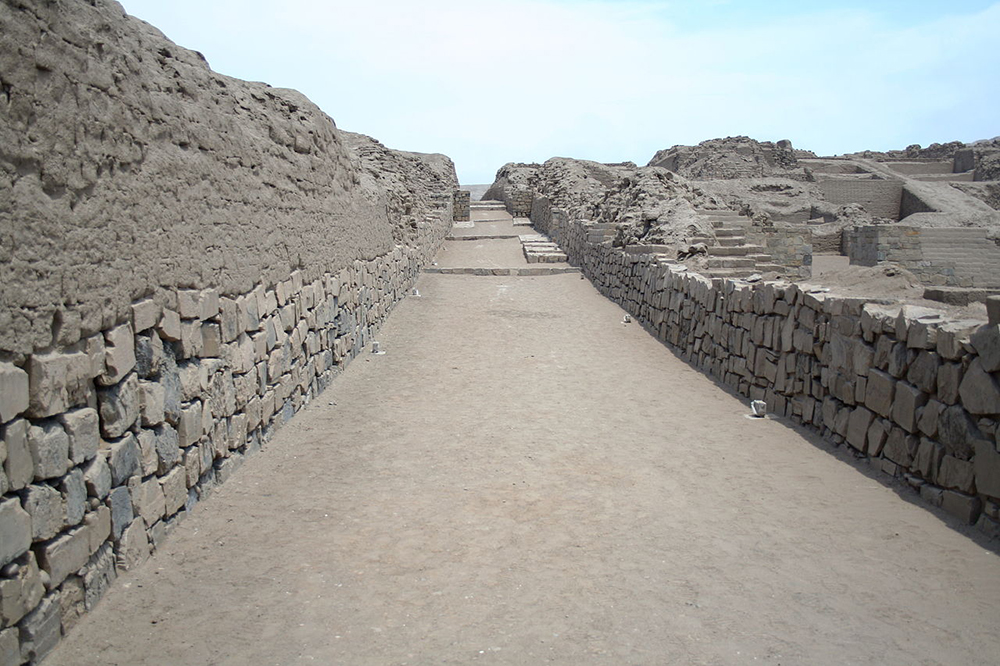 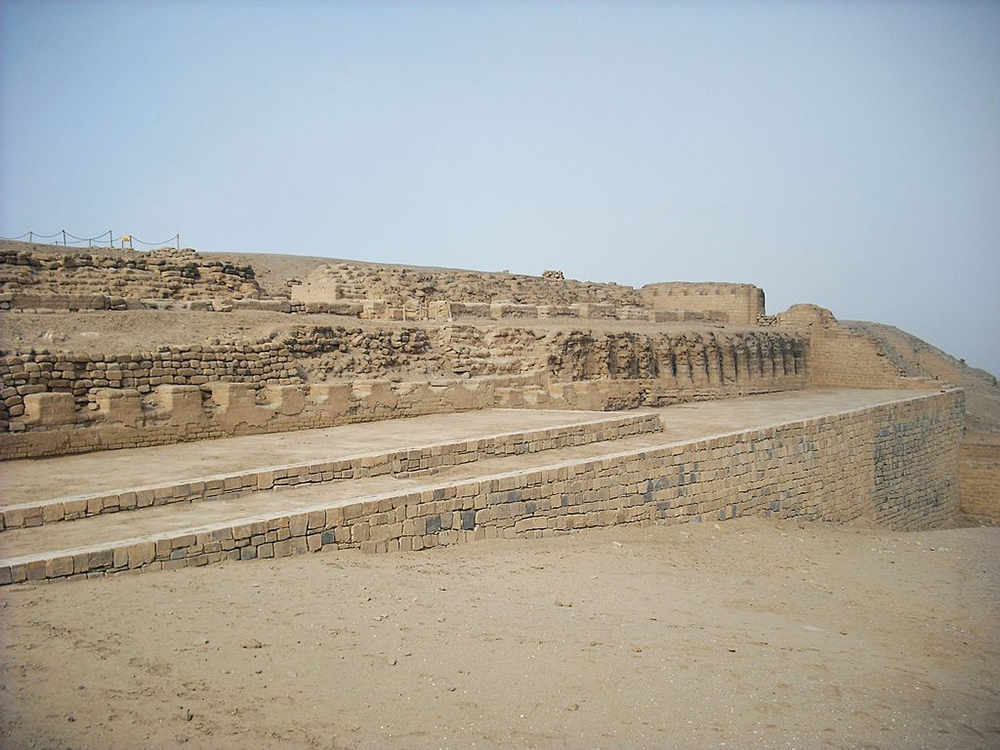 Pachacamac (Quechua: Pachakamaq) is an archaeological site 40 kilometres (25 mi) southeast of Lima, Peru in the Valley of the Lur’n River. The site was first settled around A.D. 200 and was named after the "Earth Maker" creator god Pacha Kamaq. The site flourished for about 1,300 years until the Spanish invaded. Pachacamac covers about 600 hectares of land.

In the 1890s archaeologists first began exploring Pachacamac. They found many enormous buildings and burial sites that had been previously looted. The first (sacred) section of the site includes temples of religious significance and a large cemetery. The second section includes several buildings which are mainly secular pyramids. In this complex of buildings there were mud-brick stepped pyramids with ramps and plazas. These buildings are dated between the late 1300s and the mid-1400s.

The three most famous pyramids are all found in the sacred sector (the first sector). These are the Painted Temple, the Temple of the Sun, and the Old Temple of Pachacamac.

According to Peter Eekhout, an archaeologist who studied and excavated the site of Pachacamac. For decades most scholars thought the pyramids (from the second section) were religious embassies that housed delegations from far-off communities who came to worship, bring tribute, and make offerings to Pachacamac. However, Eekhout came to a different conclusion after his work at the site. Eekhout and his team found that the structures lacked the features that characterized religious centers of the time. He concluded that the structures were used as palaces for the Ychsma (EESH-ma), the rulers of Pachacamac.

In 1938, an archaeologist found a 7.6-foot-long (2.34 meters) idol, which has a diameter of 5.1 inches (13 centimeters), at the Painted Temple, an object that was allegedly destroyed by Hernando Pizarro. Carbon-14 dating found that the idol dated to about A.D. 760 to 876, the time of the Wari Empire and that it had once been painted with cinnabar.

The Temple of the Sun is 30,000m squared in size and is in the shape of a trapezoid. It has the common step pyramid architecture which forms terraces around the structure. This temple has been dated to the time of Inca control over Pachacamac. Some archaeologists believe human sacrifices may have taken place at this the Temple. Sacrifices of women and children were found in an Inca cemetery within a portion of the structure. Burial goods found with the sacrifices point to the sacrifices originating from coastal societies. Unfortunately archaeologists are limited in their knowledge of this site because the Temple of the Sun and many other pyramids at Pachacamac have been irreversibly damaged by looting and the El Nino weather phenomenon.