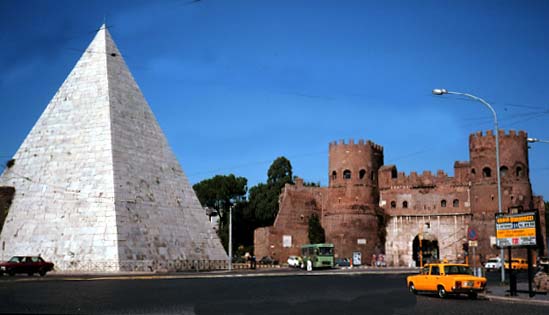 The Pyramid of Cestius (in Italian, Piramide di Caio Cestio or Piramide Cestia) is an Egyptian-style pyramid in Rome, Italy near the Porta San Paolo and the Protestant Cemetery.

The pyramid is a funerary monument built about 12 BC as a tomb for Caius Cestius, a member of one of the four great religious corporations at Rome, the Septemviri epulonum. It is of brick-faced concrete covered with slabs of white marble, 27 meters high and about 22 meters square, standing on a travertine foundation. In the interior is the burial chamber, 5.95 metres long, 4.10 wide and 4.80 high. On the east and west sides, about halfway up, is the inscription recording the names and titles of Cestius, and below, on the east side only, another which relates the circumstances of the erection of the monument (CIL vi.1374).

The peculiar conceit of a pyramid in Rome must be laid to the fact that Rome had conquered Egypt a few years before, in 30 BC, and the ancient culture of the new province became fashionable for a while; at any rate the tomb is unique among ancient Roman monuments, and not until modern funerary architecture did Rome see another pyramid within its walls.

A comparison of their shape reveals that the structural strength of concrete made it possible to build the Roman pyramid at a much sharper angle than those of Egypt.

In the 3rd century the pyramid was included inside the Aurelian Walls, and the Middle Ages, including the author Petrarch, seems to have thought of it, erroneously, as the tomb of either Romulus or Remus, in spite of the inscription.

At that time, it was considered one of the most important monuments of antiquity. It had been conserved 'nearly intact', but was neverhteless overgrown with plants. The inscription 'Caius Cestius' was barely visible. Pier Paolo Vergerio mentioned around 1400 that it was difficult to read because of the vegetation.

In 1660, excavations were undertaken: two statue bases were found outside it dedicated to Cestius, and an opening was dug into the pyramid itself, when it was discovered that the burial chamber was once decorated with frescoes, only the scantest traces of which now remain.

The Falicon pyramid near Nice in France is suspected by some to have been constructed by Roman legionaries from an Egyptian cult. 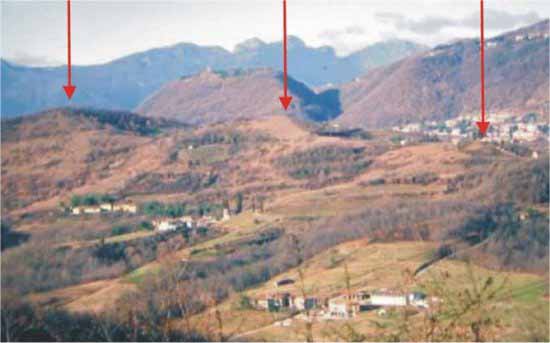 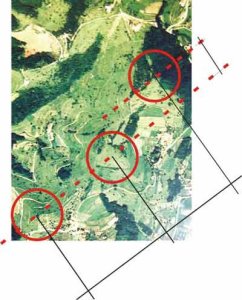 Discovered May 2, 2003, from the air over northern Italy, 40 km from Milan, were three pyramids, with the same alignment as Giza and Orion. They are the first pyramids ever discovered in Italy and the dimensions are quite impressive. The highest pyramid is [500 feet] tall. They are stone buildings, as recent excavations have proved. However, they are now completely covered by ground and vegetation, so that they look like mounds.

The inclination degree of all the three pyramids is 42/43ˇ and there is a perfect alignment with the Orion constellation. Nothing was found nearby which may help to date the structures and in the area there was not any civilization able to build similar structures at the time. The people who lived there were mainly gatherers and hunters.