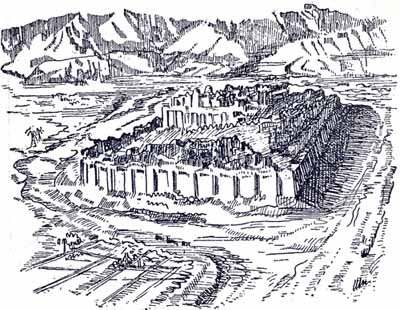 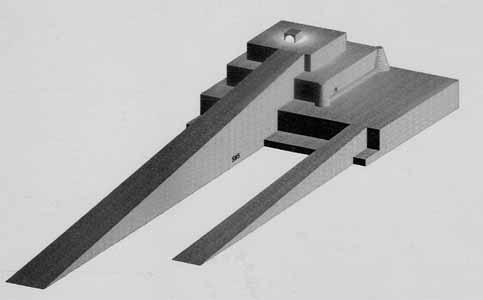 Sialk is a large ancient archeological structure in Kashan, Iran.It is claimed to be the world's oldest ziggurat, dating to the 3rd millennium BC, tucked away in the suburbs of the city of Kashan, in central Iran, close to Fin Garden.

What remains of this 5000-year-old ziggurat is not in a favorable condition like many other ancient ruins in Iran. At the site, there are actually two structures (necropolis) at Sialk situated several hundred feet from each other.

The three platforms of the larger ziggurat however still remain in place. Not much remains of the smaller structure.

The Louvre has also excavated a cemetery near the structures that have been dated as far back as 7500 years.

Sialk is one of four ziggurats built by the Elamite civilization. The other three are:

The Ziggurat at Ur was rebuilt by Saddam Hussein with bricks stamped with his name. Sialk is the 32nd and most recent ziggurat to be discovered.

"Teppe Sialk" (In Persian, Tappe means "hill" or "mound") was first excavated by a team of European archeologists headed by Roman Ghirshman in the 1930s. His extensive studies were followed by D.E.McCown, Y. Majidzadeh, P. Amieh, up until the 1970s, and recently reviewed by Iran's Cultural Heritage Organization in 2002 (led by Shah-mirzadi, PhD, U of Penn). But like the thousands of other Iranian historical ruins, the treasures excavated here eventually found their way to museums such as The Louvre, The British Museum, The Metropolitan Museum of Art in New York, and private collectors.

The Sialk ziggurat has 3 platforms, and although the ziggurat itself was built in 2900 BC, it still predates Urnamu's Ziggurat at Ur, which was built in 2100 BC. However, the earliest archeological remains of the north mound date back to the middle of the 6th millennium BC, i.e. about 7500 years ago. A joint study between Iran's Cultural Heritage Organization, The Louvre, and Institute Francais de Recherche en Iran also verifies the oldest settlements in Sialk to date back to 5500 BC.

Sialk, and the entire area around it, is thought to have first originated as a result of the pristine large water sources nearby that still run today. The Cheshmeh ye Soleiman (or "Solomon's Spring") has been bringing water to this area from nearby mountains for thousands of years. The Fin garden, built to its present form in the 1600s is a popular tourist attraction today. It is here where Persian Kings of the Safavid dynasty would spend their vacations away from their capital cities. It is also here where, Piruz (Abu-Lu'lu'ah), the Iranian assassin of Islam's second Caliph is buried. All these remains are located in the same location where Sialk is.

What little is left of the two crumbling Sialk ziggurats is now threatened by the encroaching suburbs of the expanding city of Kashan. It is not uncommon to see kids playing soccer amid the ruins, while only several meters away lie the supposedly "off limit" 5,500 year old skeletons unearthed at the foot of the ziggurat. The site still remains to be registered as a World Heritage Site at UNESCO for protection. Sialk 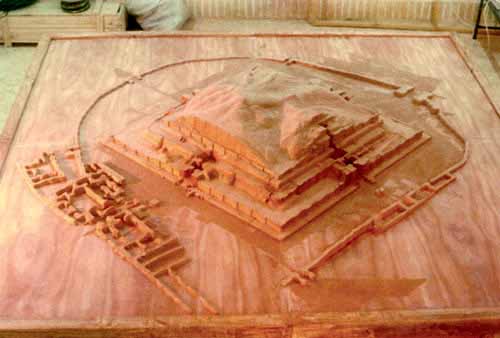 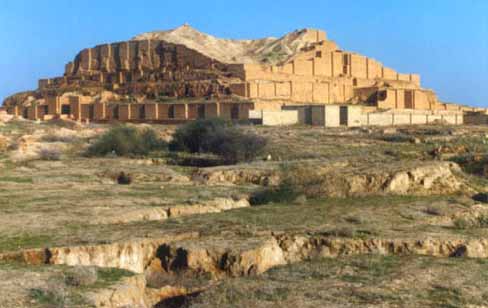 Choqa (or Chogha) Zanbil is an ancient Elamite complex in the Khuzestan province of Iran. It is one of the few extant ziggurats outside of Mesopotamia (the other is Sialk). It lies approximately 45 kilometres south of Susa and 230 kilometres north of Abadan by way of Ahvaz, which is 60 kilometres away.

It was built about 1250 BCE by the king Untash-Napirisha, mainly to honour the great god Inshushinak. Its original name was Dur Untash, which means 'town of Untash', but it is unlikely that many people, besides priests and servants, ever lived there.

The complex is protected by three concentric walls which define the main areas of the 'town'.

The inner area is wholly taken up with a great ziggurat dedicated to the main god, which was built over an earlier square temple with storage rooms also built by Untash-Napirisha.

The middle area holds eleven temples for lesser gods. It is believed that twenty-two temples were originally planned, but the king died before they could be finished, and his successors discontinued the building work.

Although construction in the city abruptly ended after Untash-Napirisha's death, the site was not abandoned, but continued to be occupied until it was destroyed by the Assyrian king Ashurbanipal in 640 bce.

Some scholars speculate, based on the large number of temples and sanctuaries at Choqa Zanbil, that Untash-Napirisha attempted to create a new religious center (possibly intended to replace Susa) which would unite the gods of both highland and lowland Elam at one site.

There is no adequate water source near Choqa Zanbil, and in order to secure a supply to the town's inhabitants, the king dug a great canal from a river many kilometres away.

This canal was a massive work at the time, and a length of it is yet in use.

Archaeological excavations undertaken between 1951 and 1962 revealed the site again, and the ziggurat is considered to be the best preserved example in the world. In 1979, Choqa Zanbil became the first Iranian site to be inscribed on the UNESCO World Heritage List. Choqa Zanbil