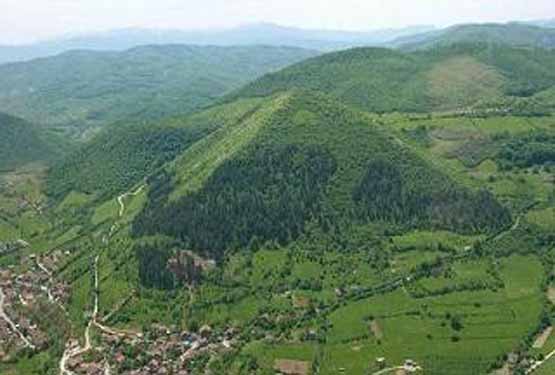 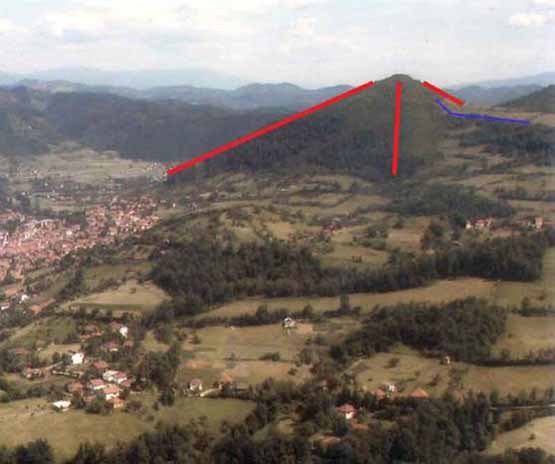 Bosnian pyramids refers to an area located around Visocica hill (or Grad hill), in the Bosnia and Herzegovina town of Visoko, northwest of Sarajevo , which became the focus of international attention in October 2005 following a news-media campaign promoting the false idea that it is actually the largest of a group of ancient man-made pyramids.

Scientific investigations of the site show that there is no pyramid there. Additionally, scientists have criticized the Bosnian authorities for supporting the pyramid claim saying, "This scheme is a cruel hoax on an unsuspecting public and has no place in the world of genuine science."

The 213 metre Visocica hill, upon which the Old town of Visoki was once sited, is roughly pyramid-shaped. The idea that it constitutes an ancient artificial edifice was publicized by Houston-based expatriate Bosnian author and metal worker Semir Osmanagic, whose subsequent excavations at the site have uncovered what he claims to be a paved entrance plateau and tunnels, as well as stone blocks and ancient mortar which he has suggested once covered the structure. Osmanagic has claimed that the dig involved an international team of archaeologists from Australia, Austria, Bosnia and Herzegovina, Scotland and Slovenia. However, many archaeologists he named have stated they had not agreed to participate and were never at the site. The dig began in April 2006.

Newspaper reports have quoted Osmanagic as claiming that they were constructed by ancient Illyrian inhabitants of the Balkans as early as 12,000 BC. But in an interview with Philip Coppens in Nexus (April-May 2006), Osmanagic attempted to clarify his previous statements, stating he was misquoted: he does claim that they were most likely constructed by the Illyrians, who he claims lived in the area from 12,000 BC to 500 BC, and that the pyramid was therefore most likely constructed between those two dates - not in 12,000 BC.

Osmanagic claims the excavation has produced evidence of building blocks as well as tunnels. Earlier geological work has also indicated that human activity had shaped the hill. Additionally Osmanagic claims to have found tunnels in the hillside which he interprets as ventilation shafts.

Osmanagic believes his discoveries around Visoko will have further implications for world prehistory. By comparing the varying heights of the tallest pyramids in Mexico and Egypt with Visocica hill, he concluded that the pyramids were all built by the same people, with the Bosnian Pyramid being the last to be built.

However, upon further thought he has decided that this dating mechanism may not be reliable and has now announced Visocica hill could be "The mother of all Pyramids", a claim he says would be corroborated by the existence of sacred geometry and further numerological study of messages left in the pyramid for future generations.

Osmanagic estimates that the Sun pyramid stands 722 feet (220m) high (or, depending upon the report, either 230 feet (70m) high or 328 feet (100m) high). If it is 722 feet, it would be one third taller than the Great Pyramid of Giza, making it the largest pyramidal structure on Earth.

The current target of the project is to complete excavation by 2012. This is in order to "break a cloud of negative energy, allowing the Earth to receive cosmic energy from the centre of the galaxy" according to Osmanagic, who also hopes that it will be listed as UNESCO World Heritage Site.

Semir Osmanagic's claims, widely reported in the mass media, have been challenged by a number of experts, who have accused him of promoting pseudo-scientific notions and damaging archaeological sites with his excavations. Penn State University Professor Garrett Fagan is quoted as saying "They should not be allowed to destroy genuine sites in the pursuit of these delusions. It's as if someone were given permission to bulldoze Stonehenge to find secret chambers of lost ancient wisdom underneath."

Boston University's Curtis Runnels, an expert in prehistoric Greece and the Balkans states that, "Between 27,000 and 12,000 years ago, the Balkans were locked in the last Glacial maximum, a period of very cold and dry climate with glaciers in some of the mountain ranges. The only occupants were Upper Paleolithic hunters and gatherers who left behind open-air camp sites and traces of occupation in caves. These remains consist of simple stone tools, hearths, and remains of animals and plants that were consumed for food. These people did not have the tools or skills to engage in the construction of monumental architecture."

Excavations by archaeologists not related to the Foundation in the summer of 2008 uncovered medieval artefacts and led to renewed calls for the government to cancel Osmanagic's digging permits.

In a letter to the editor of The Times on 25 April 2006, Professor Anthony Harding, president of the European Association of Archaeologists, referred to Osmanagic's theories as "wacky" and "absurd" and expressed concern that insufficient safeguards were in place to protect Bosnia's "rich heritage" from "looting and unmonitored or unauthorised development". After visiting the site himself, Harding reported, "we saw areas of natural stone (a breccia), with fissures and cracks; but no sign of anything that looked like archaeology."

On May 8, 2006, members of the Geological team investigating Visocica on behalf of the Archaeological Park: Bosnian Pyramid of the Sun Foundation held a press conference in Tuzla to present the results of their research. The academics, from the Faculty of Mining and Geology at the University of Tuzla and led by Professor Dr. Sejfudin Vrabac, concluded that the hill is a natural geological formation, made of classic sediments of layered composition and varying thickness, and that its shape is a consequence of endodynamical and exodynamical processes in post-Miocene era.

According to Professor Vrabac, who specializes in paleogeology, there are dozens of like morphological formations in the Sarajevo-Zenica mining basin alone. The Geological team report on Visocica, based on the data collected in six drill holes at 3 to 17 metre depths, is supported by the Research and Teaching Council of the Faculty of Mining and Geology, as well as the Association of Geologists of Federation of Bosnia and Herzegovina.

In June 2006, Zahi Hawass's name became linked to the excavations as recommending a supposed expert, Aly Abd Alla Barakat, to investigate the hills. Upon being contacted Hawass denied any involvement, accusing Osmanagic of "giving out false information", and clarifying that Barakat "knows nothing about Egyptian pyramids".

The Archaeological Park: Bosnian Pyramid of the Sun Foundation has said that Barakat inspected the hills and stated, "My opinion is that this is a type of pyramid, probably a primitive pyramid."

In November 2007 an English version of a 2006 report by Barakat was posted on the foundation site.

Osmanagic also invited geologist and alternative archaeologist Robert Schoch to visit the site. In a preliminary report he concluded that there were natural geological explanations for all the features claimed to be artificial by Osmanagic. In the case of the tunnels he further added: The much-touted ancient inscriptions seem not to be ancient at all. I was told by a reliable source that the inscriptions were not there when members of the pyramid team initially entered the tunnels less than two years ago. The ancient inscriptions had been added since, perhaps non-maliciously, or perhaps as a downright hoax.

Schoch's website documents "extreme damage being done by the way the excavations are being performed," and accuses Osmanagic of launching "a deliberate smear campaign."