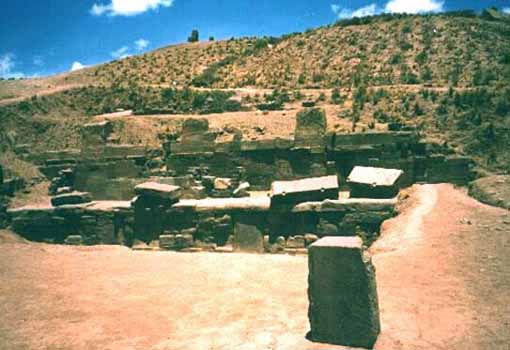 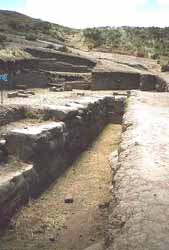 The 59-foot-tall Akapana resembles a large natural hill more than a pyramid. Closer inspection shows walls and columns sticking out from the base and carved stones on its summit and tumbling down the sides. The somewhat amorphous shape of this tremendous pyramid is the result of centuries of looting and quarrying of its stones for colonial churches and even for a railway built in the 1900s. New research shows that this pyramid was never quite finished in antiquity.

At Tiwanaku we seem to have an interesting situation where the city's previous infrastructure was razed and completely redone just before the city was suddenly abandoned. It seems that around A.D. 700, three centuries into the existence of Tiwanaku as a monumental and powerful city, there was a sudden change to direct all construction efforts toward building what was the largest structure in the Andes. The previous monuments of the city were torn down and their stones reused to build the Akapana pyramid. The effort was too great, and the pyramid lay unfinished when the city was abandoned. One Spanish chronicler said of Tiwanaku, "They build their monuments as if their intent was never to finished them."

Around the rising pyramid, the arrangement of small single homes was replaced by large square compounds--also using the scavenged remains of previous monuments--serving perhaps as ritual places for powerful families or ethnic groups. What this change represents is unknown at the present. This could represent the rise of a powerful king, a popular religious movement, or the formation of a multicultural city. Whatever the cause behind this massive transformation, it didn't last long. By A.D. 950 all monumental construction suddenly ends with stones in various stages of dressing scattered around the partially built monuments.