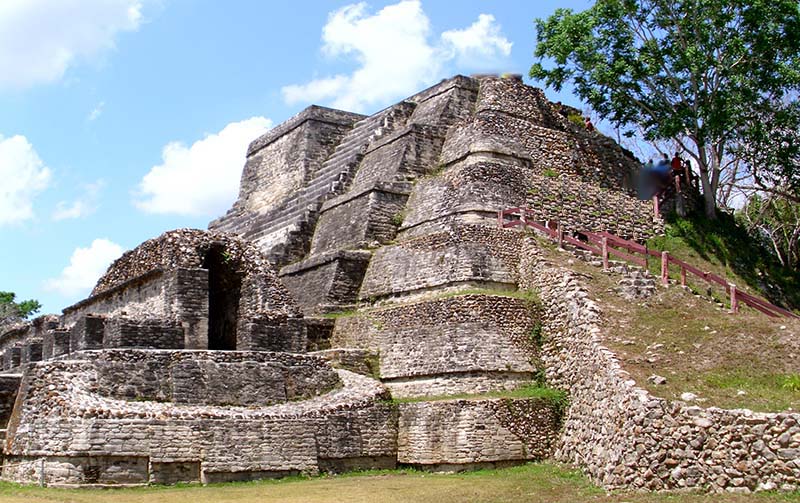 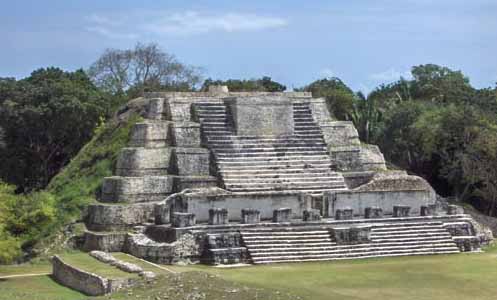 Altun-Ha means "stone water" - is located approximately 30 miles north of Belize City. This ceremonial center, located six miles from the sea, was important as a trading center and as a link between the coast and the settlements of the interior.

Within the central portion of the site there are more than 500 structures. The entire city covered some 1.8 square miles and contains around 250 to 300 mounds that have never been excavated.

Population estimates for Altun Ha at its peak are 9,000 to 12,000. Also, a treasure of over 300 jade objects was found there, including the ornately carved head of Kinisch Ahau, the Mayan Sun God. This head, weighing 9 3/4 pounds and measuring nearly 6 inches from the base of the crown, is believed to be the largest Maya jade carving in existence.

Caracol means "conch shell" or "snail", is located south of San Ignacio, in the Cayo district. Though only considered to be a simple Mayan ceremonial center when discovered in 1938, it was later found to be one of the largest sites in all the Maya World. The center of the site has about 20 major plazas and the pyramid, the Canaa, meaning "sky palace", which rises 140 ft and is the tallest man-made structure in Belize. 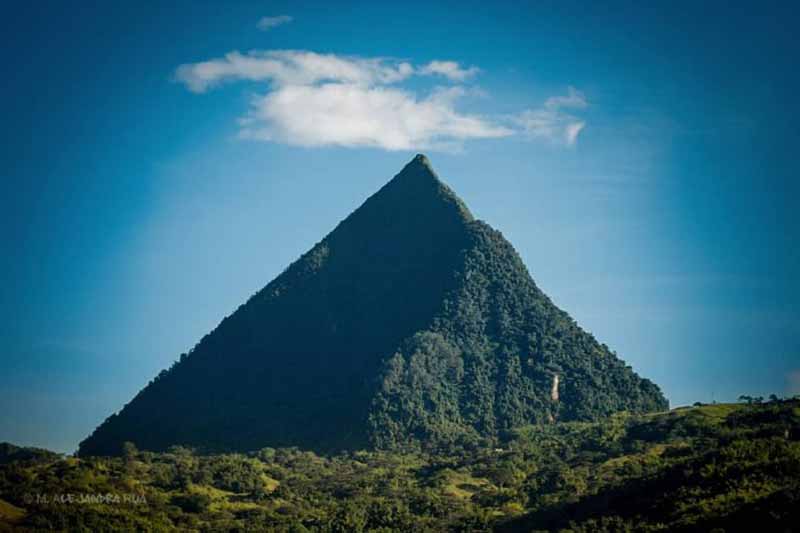 Cerros is located in the north of Belize, on a peninsula, in the Bay of Chetuma. Its tallest structure rises 65 feet above the plaza floor and the site includes three large acropolises which dominate several plazas bordered by pyramids. With it's location at the mouth of the New River, Cerros was important as a coastal trading center.

Cuello is located on private property southwest of Orange Walk Town and most of it
is still overgrown. Cuello is one of the oldest of all Maya sites, dating from 2600 BC. 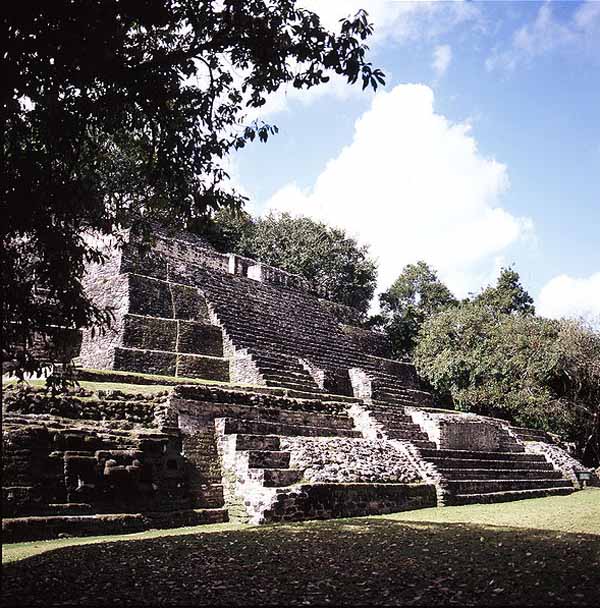 The Lamanai lie along the lagoon and cover an area of 3.5 square miles and have more than 700 structures. This site features monumental architecture of temples and palaces, one of which is over 100 feet high.


The El Pilar Archaeological Reserve is located just out of the western town of San Ignacio, astride the Belize-Guatemala border. El Pilar has more than twenty-five identified plazas. In an area of 100 acres, there are more than a dozen large pyramids and many other buildings. It is the largest center in the Belize River area.


Las Milpas is located in the Rio Bravo Conservation Area in northwestern Belize. The site contains more than 24 courtyards and over 85 structures and is the third largest Maya site in Belize. The Great Plaza at Las Milpas is one of the largest in the Maya world. Beyond the Great Plaza lie other plazas, pyramids, and buildings. There is evidence of advanced agricultural techniques with terracing and water management systems.


Lubaantunis located northwest of Punta Gorda near the village of San Pedro, Columbia, Lubaantun is noted for its unusual style of construction. The large pyramids and terraces are made of precision cut stone blocks fitted together without mortar. 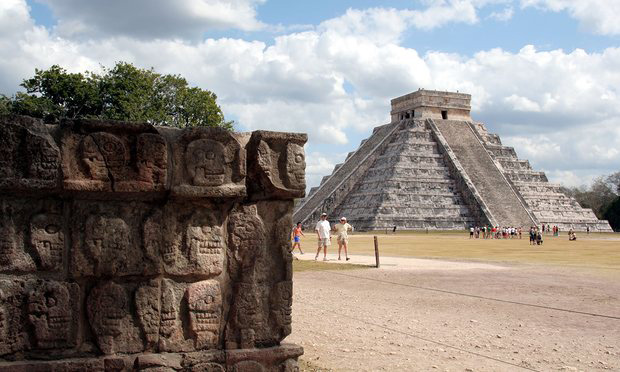 El Castillo a pyramid rising over 130 feet at the south end of the main complex.

El Castillo (Spanish for "The Castle") is a spectacular pyramid that dominates the center of the Chichen Itza archaeological site in the Mexican state of Yucatan. It was built by the Maya civilization around the 9th century.El Castillo served as a temple to the god Kukulcan (the Maya name for Quetzalcoatl ). It is a step pyramid with a ground plan of square terraces with stairways up each of the four sides to the temple on top.

Great sculptures of plumed serpents run down the sides of the northern staircase, and are set off by shadows from the corner tiers on the spring and autumn equinoxes. It was practice in Mesoamerican cities to periodically build larger and grander temple pyramids atop older ones, and this is one such example.

Thanks to archaeologists, a doorway at the base of the north stairway leads to a tunnel, from which one can climb the steps of the earlier version of El Castillo inside the current one, up to the room on the top where you can see King Kukulcan's Jaguar Throne, carved from stone and painted red with jade spots.

The structure was partially reconstructed from the somewhat dilapidated state in which it was first rediscovered, as part of a 17-year rebuilding effort for the site conducted under the auspices of the Carnegie Institution of Washington, led by the noted Mayanist scholar Sylvanus G. Morley.

Two sides of the pyramid were almost completely rebuilt under this program, which ran from the late 1920s to its conclusion in 1940.

Each of the structure's four stairways contain 91 steps. When counting the top platform as another step, in total El Castillo has 365 steps, one step for each day of the approximated tropical year recorded by the portion of the Maya calendar known as the Haab'.

The structure is 24 metres high, plus an additional 6 m for the temple. The square base measures 55.3 metres across.The outside edges of the pyramid also include nine large steps, which are theorized to represent the nine planets in our solar system. 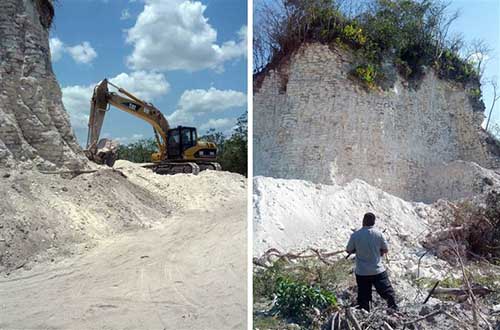 A construction company has essentially destroyed one of Belize's largest Mayan pyramids with backhoes and bulldozers to extract rock for a road-building project. The head of the Belize Institute of Archaeology says the destruction was detected late last week. Only a small portion of center of the pyramid mound was left standing.


Video: Mayan pyramid bulldozed by Belize construction crew   BBC - May 14, 2013
Officials in Belize say a construction company has destroyed one of the country's largest Mayan pyramids. Head of the Belizean Institute of Archaeology Jaime Awe said the Noh Mul temple was leveled by a road-building company seeking gravel for road filler. The Mayan temple dates back to pre-Columbian times and is estimated to be 2,300 year old. Only a small core of the pyramid was left standing. Police said they were investigating the incident. Archaeologists said this was not the first incident of its kind.