The Pyramid of Amenemhet III 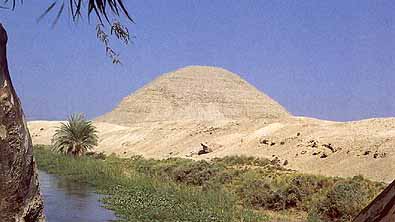 Amenemhet III built his second pyramid closer to the area that he seemed to love, the Fayoum. It was not the only building he did there. He also built a temple in Kiman Faris (Faras) to the Fayoum's chief divinity, the crocodile god Sobek. Kiman Faris was known to the Greeks as Krokodilopolis, or more commonly, Crocodilopolis. Nearby close to the modern village of Biahmu, he also constructed two colossal 12 meter high quartzite statues with enormous bases.

After the failure of his Dahshur Pyramid after almost 15 years worth of work, he more or less completely abandoned that pyramid and started completely over with a new pyramid located near the modern village of Hawara el-Makta, not far from Senusret II's pyramid at el-Lahun (Kahun). The pyramid lies on a long spit of low desert, and was built vary differently then his pyramid at Dahshur. The name of this pyramid has never been discovered for certain, but it might have been called "Amenemhet Lives".

The Lepsius expedition attempted to enter the pyramid in 1843, and about 1883, Luigi Vassalli tried again, but not until Petrie in 1889 was the interior actually investigated. Petrie was working with Wainwright and MacKay at the time and it took him two difficult seasons to finally reach the burial chamber.

Petrie not only investigated the pyramid fairly thoroughly, he apparently also closely examined the huge mortuary complex associated with the pyramid. The reason that modern and not so modern travelers call this the Labyrinth is because of the complex, but splendid mortuary temple located on the pyramid's south side.. Herodotus, Diodorus Siculus, Strabo and Pliny all make reference to this structure. According to Diodorus, Daedalus was so impressed by the temple that he built his own labyrinth for Minos in Crete based on Amenemhet III's temple.

Regrettably, the structure is mostly in ruins today, and the floor plan can no longer be precisely determined. It was quarried for material since Roman times, and all that is left is a foundation bed of sand and limestone chips. The inner part of the mortuary temple and particularly the offering hall was probably located in the back of the mortuary temple, as would be customary, near or up against the pyramid. In front of it was a whole system of columned halls, columned courtyards, porticos, colonnades, chambers and passageways. To the south there was another extensive open courtyard.

The whole complex covered some 28,000 square meters. Strabo tells us there were as many halls as there were provinces in Egypt, of which there were 42. He also tells us that each hall honored the divinities of the various provinces. Herodotus speaks of 12 main courtyards, and said that the visitor was conducted "from courtyards into rooms, rooms into galleries, galleries into more rooms, thence into more courtyards". Both Herodotus and Piny the Elder also mention lower rooms, or crypts devoted to the sacred crocodiles representing Sobek. All that Petrie was able to find were the statues of Sobek and Hathor, along with one unusual palm goddess. He also found a statue of Amenemhet III in a nearby irrigation canal that probably belonged to the temple. 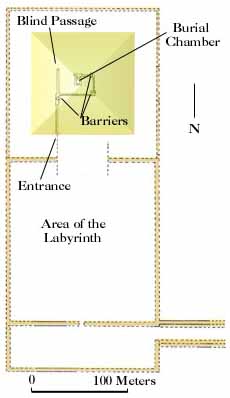 The pyramid itself was built in typical 12th Dynasty fashion with a mudbrick core and a casing of fine white limestone. The entrance to the subterranean levels was located in the actual face of the pyramid on the south side, very near the southeast corner. Within the pyramid, a descending corridor with a stairway first lead north. This corridor, which descends to a lower level then the burial chamber, was sheathed in fine white limestone, continued until reaching a small chamber, and continuing straight leads to a blind dead end. However, the builders used an elaborate device first seen in the Abydos tomb of Senusret III. A second corridor is hidden within the ceiling of the small chamber.

It was originally meant to be blocked by a 20 ton quartzite slab. This corridor very shortly arriving at a second chamber. From this chamber, two corridors depart, one north, and another to the east. The northern passage appears to dead end, but it was difficult to explore and could possibly lead to a "Southern Tomb" like that built within his Dahshur pyramid. This corridor was filled with mud that was probably the remains of mudbrick used to fill this corridor and seal it. The eastern passage, once closed by a wooden door, skirted the eastern side of the burial chamber before again arriving at a small chamber with another hidden ceiling corridor that was suppose to be blocked by a barrier portcullis. After this barrier another 90 degree turn back to the left (north) through a short corridor that leads to a final barrier with the same design. However, this barrier was actually in place. After a final 90 degree left turn back to the west one finally arriving at the northern side of first an antechamber and then the burial chamber. The burial chamber is just off of the vertical axis of the pyramid. 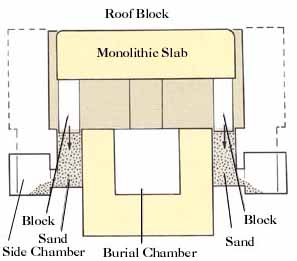 After the disastrous results with Amenemhet III's pyramid at Dahshur, the builders took more precautions this time. The substructure was much less complex then the pyramid at Dahshur, with fewer corridors and chamber. In order to make sure the burial chamber was stable, they dug a rectangular hole in the rock subsoil and lined it with limestone blocks, thus forming the side walls of the burial chamber. Of course, this also meant that the burial chamber was not as deep below the pyramid. Next, they lowered a huge, quartzite monolith that weighed some 110 tons into the chamber.

It completely filled the burial chamber, and they carved out a rectangular hole to receive the quartzite sarcophagus, which was decorated with niches. Inside it was a second sarcophagus. The builders also carved out niches in the monolith for two canopic chests. Three more quartzite slabs surmounted the Quartzite monolith. One was propped up on smaller blocks to leave a space to introduce the king's mummy and coffins. So that this slab could be lowered, the builders constructed the first known sand lowering device.

The blocks, or small pillars that the raised slab rested on in turn rested on sand filled shafts to either side of the vault. When the sand was removed through side galleries, the blocks descended along with the ceiling slab. In order to reduce the weight on the burial vault, these three huge slabs extended beyond the sides of the vault and rested on sides of the bedrock trench that dug for the burial chamber. We see the same sort of construction and sarcophagus in the probable later pyramids located at Mazghuna. 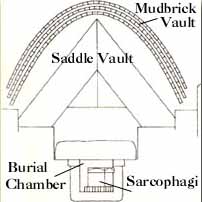 They also took precautions with the ceiling of the burial chamber. Over the flat ceiling composed of the limestone monolith slabs, they added a saddle vault, also of enormous limestone monoliths each weighing more then 50 tons, and over them another massive brick vault about seven meters high. They had finally constructed a burial chamber capable of supporting the enormous pressure of the pyramid's mass. But the entire pyramid was also constructed with a less radical slope then his pyramid at Dahshur, so there was actually less mass atop the burial chamber.

While they may have managed to secure the structural integrity of the subterranean chambers, they did not deter the tomb robbers who managed to make their way to the burial chamber and burn the rulers wooden coffin anyway.

Petrie managed to find, within the antechamber of the pyramid, duck shaped bowls, a second wooden coffin and an alabaster offering table inscribed with the name of Princess Neferuptah, one of Amenemhet III's daughters. Therefore, for some time it was thought that Princess Neferuptah had been interred with her father, but that was later shown to be inaccurate.

In 1956, Naguib Farag unearthed another completely destroyed pyramid about two kilometers southeast of Amenemhet III's pyramid. In it a pink granite sarcophagus was found that also bore the name of this princess, along with traces of two wooden coffins and fragments of mummy linen. Her name was also on other funerary equipment within this pyramid, leading archaeologists, to their great surprise, to presume that the princess was buried in this pyramid instead of Amenemhet III's. However, not everyone is convinced, due to the offering table found in Amenemhet III's pyramid.

The whole complex including the mortuary temple, the pyramid and a small North temple were surrounded by a rectangular, north-south oriented enclosure wall. This was the largest such enclosure wall wall of any middle kingdom pyramid.