The Pyramid of Amenemhet I 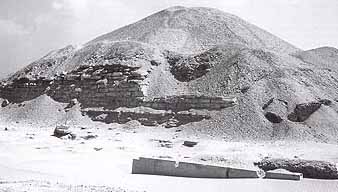 Amenemhet I, who founded Egypt's 12th Dynasty, was most likely the first ruler of the Middle Kingdom, after the First Intermediate Period, to build any sort of substantial pyramid. He did this at Lisht, near the Fayoum Oasis, which was growing in importance during this time. In fact, his pyramid named "Cult Places of Amenemhet's Appearance" most likely was built very near his new capital of Itj-towy. In addition, the old, important canal called Bahr el-Libeini may have run very close to the escarpment at the foot of Amenemhet I's pyramid, thus providing it with a harbor.

Amenemhet I also established a new tradition. In the Old Kingdom, the name of the pyramid usually was inclusive of the associated structures, including the pyramid town that so often grew up around the pyramids. However, from Amenemhet's time on, the major components of the complex each had their own names.

It was Maspero who, in 1882, was the first archaeologist to descend into the interior of Amenemhet I's pyramid. Then, in 1894 and 1895, the French archaeological expedition under the direction of Gautier and Jequier continued to investigate this pyramid. It was further explored by a team from the Metropolitan Museum of New York from 1902 until 1934 under the direction of Albert Lythgoe and Arthur Mace.

Unfortunately, a local Muslim cemetery is located atop Amenemhet I's valley temple.. This component of the complex has not been seriously investigated both because of the cemetery, and the fact that its remains are below the level of ground water in the area.

The mortuary temple is located on the east side of the pyramid and this component of the complex was called "High (rises up) Amenemhet's Beauty". It is much smaller and simpler then Old Kingdom mortuary temples that lies on a level below the pyramid's base. This may architecturally reflect back to an influence from Mentuhotep II's terraced temple at Deir el-Bahari. Hardly anything remains of this temple, and so reconstructing its layout is difficult at best. Fragmentary inscriptions and reliefs found in the ruins suggest that it may have been rebuilt during the reign of Senwosret I. Only the upper end of the mortuary temple's courtyard, which was originally open and had decorated walls, has been investigated. It may have been modeled on Mentuhotep II's complex as well.

Some relief fragments were found among the ruins of the mortuary temple and can be dated from the time of Amenemhet I. However, some seem to have been recreation of Old Kingdom scenes. Inscriptions from one such relief seem to indicate that from year 20 of Amenemhet I's rule, his son Senwosret I was a co-regent of his father. These reliefs appear to have had as their theme, the Sed Festival of Amenemhet which would have been held close to his 30th year of rule.

We do know that there was an offering hall from the limestone false door and granite altar found in the ruins. The altar is carved, depicting Nile gods and figures representing the nomes bringing offerings. In addition, foundation deposits were discovered that contained an ox skull, paint grinders and model vases of pottery and alabaster. Also found here were bricks with plaques of copper, alabaster and faience, one of which was inscribed with the pyramid's name. 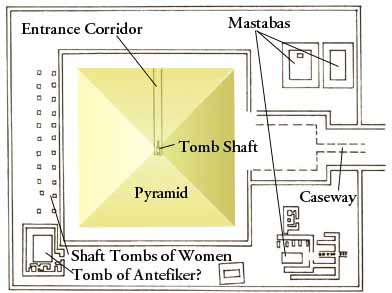 The causeway ran in a straight line on the axis of the pyramid and temple, but interestingly, was built without a roof. Its walls were nevertheless apparently decorated with scenes depicting processions of foreigners, estates, nobles and gods.

Regrettably, this generation of pyramids utilized mudbrick in their construction, which is always a problem from the standpoint of preservation. Today, the pyramid stands mostly in ruins that only rise about 20 meters above the Lisht ground level, though at one time its size was reasonably close to those built in the Old Kingdom. The core of the pyramid was made of small rough blocks of local limestone with a loose fill of sand, debris and mudbrick. Remarkably, and probably for spiritual reasons, pyramid includes relief decorated blocks from a number of Old Kingdom monuments. They include granite blocks from the pyramid complexes, particularly their caseways and valley temples, of Kufu, Khafre, Unas and Pepi (II?). They were used to line and block this pyramid's descending passage. This may suggest that the causeways and valley temples of these earlier kings may have already been ruined during the time of Amenemhet I.The casing for the pyramid was made from fine white Tura limestone.

The entrance of the descending passage way is in the north face of the pyramid about ground level. It was covered by the North Chapel, and upon the kings burial, a red granite false door at the rear of the chapel sealed the entrance. The entrance corridor, which was line with pink granite and sealed with blocks of the same material, gradually descends t a square chamber that lay on the pyramid's vertical axis. Here, a vertical shaft in the floor dropped to the burial chamber that today is troubled by local ground water. All efforts to pump the ground water out have so far failed. 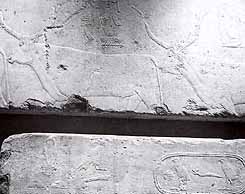 A block with the cartouche of Khufu in Amenemhet I's pyramid

There seems to have been no small cult pyramid. The pyramid and mortuary temple were surrounded by no less then two perimeter walls, the outer being made of mudbrick and the inner one made from limestone. Between these walls at the rear (west) have been discovered 22 shaft tombs apparently belonging to the royal women. Fragmentary inscriptions have provided some information on these individuals, including the king's daughter, Neferu, who was the principal wife of Senwosret I, the kings mother, Nefret, and a principal wife, Nefrytatenen, who was the mother of Senwosret I. On the southwest corner of the pyramid was also found the tomb of Amenemhet I's vizier Antefiker. Near the northeast side of the pyramid between the enclosure walls are two mastabas of unknown ownership.

This pyramid was in effect very different then its predecessors. To a certain extent, it incorporated elements of both the old pyramids and the Theban tombs, including the style of some reliefs, the two terraces of the pyramid and temple, the central shaft to the burial chamber and the open causeway. 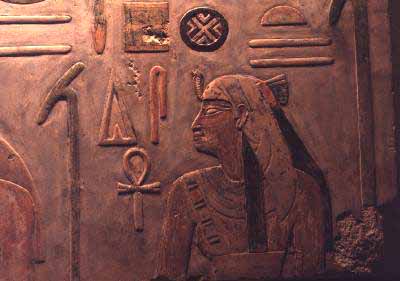