The Stone Pyramids of Prehistoric Japan

In Japan one can find an ancient stone pyramid. It is a beautifully shaped monolith, about six and a half feet tall and twelve feet at the base, practically lost in the thick forest growth on the slope of a hill near the town of Ena, in central Honsu, largest of the Japanese islands. Cut from a single, massive block of gray granite, the object was a pyramidian, a smaller version of the Great Pyramid and its full-size cousins.

This trignon, as they call it, might have passed for the missing capstone of its gigantic counterpart in Giza. People leave flowers at the base of the pyramid. Their veneration is more in keeping with Shinto practices, which predate Buddhism in Japan by unknown centuries. There are few folk lores about the pyramid. The only mythic element still current concerns a white serpent that dwells either within or underneath the trignon. It is a beneficent creature, which local people worship by laying out plates of small eggs for the snake to consume. Somehow, this practice is related to human and agricultural fertility.

But who cut the straight angles of the Japanese pyramid, when and for what purposes are utterly unknown. Nor is it the only such example. Perhaps 100 meters further up the same hill another trignon of approximately the same dimensions stands in an apparent alignment whose suspected celestial orientation has not yet been determined. At least one more pyramidian lies toward the north. Together, the monolithic trio forms a triangular relationship, the significance of which continues to escape investigators.

Surprisingly, the immediate area features many other puzzling remnants of a culture or cultures which flourished around Ena long before the advent of recorded history. The area is uncommonly rich in petroglyphs. One site is extraordinary for the enormous, flat slab of stone, some 8 by 15 feet across its smooth surface. Reverently incorporated into the forecourt of a private home by a man sympathetic to archaeological values, it is incised with dozens of human and geometric figures, together with examples of a linear script that bears a striking resemblance to Ogam.

The petroglyph stone lies in a valley surrounded by hundreds of terraced farms where rice is cultivated in a manner preserved over the course of unguessed generations. So much so, they have been honored by the government as "national treasures." But anyone who has visited the Inka cities of Ollantaytambo or Machu Picchu in the Peruvian Andes would be struck by their similarity to the Ena agricultural terraces.

On the other side of the valley from the trignons, we climbed to another, steeper hill densely covered with pines. Eventually, the path leading through dark shadows opened into a sunlit clearing, at the center of which waited two upright, stone slabs. Some seven feet tall and two feet thick, they were practically mirror images of each other and separated by a one-inch gap.

After patient observation, a local resident, Mr. Suzuki, proved that the stones were precisely oriented to sunrise of the winter solstice. At dawn of the shortest day of the year he was thrilled to phtotograph the rising sun shoot its first rays through the thin gap between the twin megaliths--and only on the morning of that day. Later, he found a faint image apparently representing the sun incised on the flanks of one of the stones, strongly suggesting the astronomical intentions of its prehistoric builder.

Like the trignons, the solar marker's age and cultural identity are unknown. Yet, its similarity to more famous megalithic structures in Western Europe is uncanny. In Ancient Greece, as well as pre-columbian Ohio (Locust Grove's *Great Serpent Mound*), the icon of a snake disgorging an egg from its mouth recalls surviving folk traditions of the trignon's white serpent and its ritual offering of eggs by resident farmers.

What are we to make of Ena's rice terraces? Throughout the world, the only other comparable examples (save those in Peru) may be found in the Philippines, north of Manila, at Bonaue, which date back 2,000 years. The three widely separated locations imply a line of relationship defying the formidable oceanic distances between them: Peru, the Philippines, Japan. 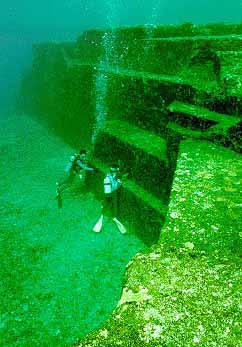 OFF THE COAST OF JAPAN