A sundial is a device that tells the time of day by the position of the Sun. In common designs such as the horizontal sundial, the sun casts a shadow from its style onto a surface marked with lines indicating the hours of the day. The style is the time-telling edge of the gnomon, often a thin rod or a sharp, straight edge. As the sun moves across the sky, the shadow-edge aligns with different hour-lines. All sundials must be aligned with their styles parallel to the axis of the Earth's rotation to tell the correct time throughout the year. The style's angle from the horizontal will thus equal the sundial's geographical latitude. It is common for inexpensive mass-produced decorative sundials to have incorrect hour angles, which cannot be adjusted to tell correct time. Read more ... 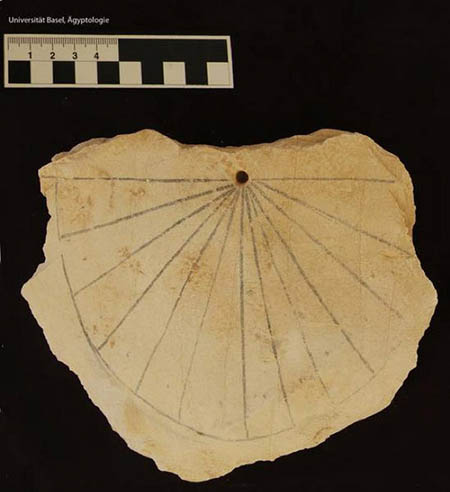 The earliest sundials known from the archaeological record are the obelisks (3500 BC) and shadow clocks (1500 BC) from ancient Egyptian astronomy and Babylonian astronomy. Presumably, humans were telling time from shadow-lengths at an even earlier date, but this is hard to verify. In roughly 700 BC, the Old Testament describes a sundial - the "dial of Ahaz" mentioned in Isaiah 38:8 and II Kings. The Roman writer Vitruvius lists dials and shadow clocks known at that time. Italian astronomer Giovanni Padovani published a treatise on the sundial in 1570, in which he included instructions for the manufacture and laying out of mural (vertical) and horizontal sundials. Giuseppe Biancani's Constructio instrumenti ad horologia solaria (ca. 1620) discusses how to make a perfect sundial.They have been commonly used since the 16th century. 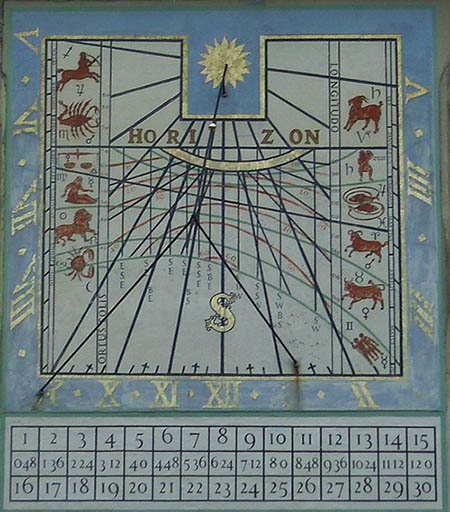 Moondial at Queens' College, Cambridge, showing
the table of corrections for the phase of the moon

Moondials are time pieces similar to a sundial. The most basic moondial, which is identical to a sundial, is only accurate on the night of the full moon. Every night after it becomes an additional (on average) 48 minutes slow, while every night preceding the full moon it is (again on average) 48 minutes fast, assuming there is even enough light to take a reading by. Thus, one week to either side of the full moon the moondial will read 5 hours and 36 minutes before or after the proper time. More advanced moondials can include charts showing the exact calculations to get the correct time, as well as dials designed with latitude and longitude in mind. Moondials are very closely associated with lunar gardening (night-blooming plants) and some comprehensive gardening books may mention them. Read more ...


Bronze Age Sundial-Moondial Discovered in Russia   Live Science - October 15, 2014
A strange slab of rock discovered in Russia more than 20 years ago appears to be a combination sundial and moondial from the Bronze Age, a new study finds. The slab is marked with round divots arranged in a circle, and an astronomical analysis suggests that these markings coincide with heavenly events, including sunrises and moonrises. The sundial might be evidence of attempts of ancient researchers to understand patterns of apparent motion of luminaries and the nature of time.