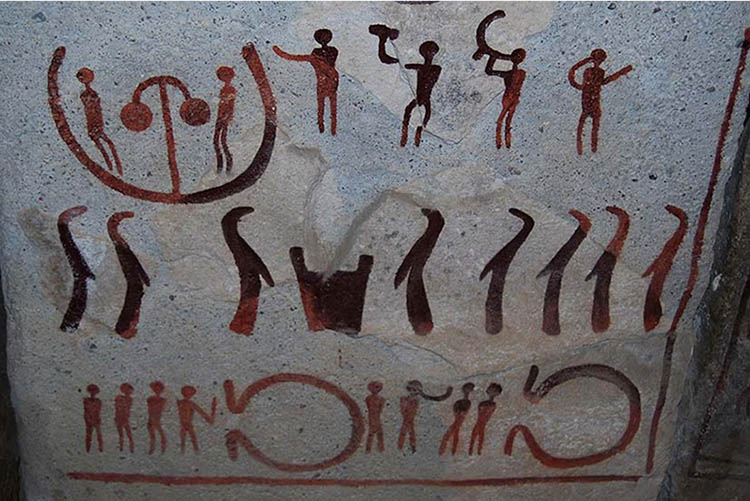 It is likely that the first musical instrument was the human voice itself, which can make a vast array of sounds, from singing, humming and whistling through to clicking, coughing and yawning. The oldest known Neanderthal hyoid bone with the modern human form has been dated to be 60,000 years old, predating the oldest known Paleolithic bone flute by some 20,000 years, but the true chronology may date back much further.

Most likely the first rhythm instruments or percussion instruments involved the clapping of hands, stones hit together, or other things that are useful to create rhythm and indeed there are examples of musical instruments which date back as far as the paleolithic, although there is some ambiguity over archaeological finds which can be variously interpreted as either musical or non-musical instruments/tools. Examples of paleolithic objects which are considered unambiguously musical are bone flutes or pipes; paleolithic finds which are open to interpretation are pierced phalanges (usually interpreted as "phalangeal whistles"), objects interpreted as Bullroarers, and rasps.

Music can be thetically traced to prior to the Oldowan era of the Paleolithic age, the anthropological and archaeological designation suggests that music first arose (among humans) when stone tools first began to be used by hominids. The noises produced by work such as pounding seed and roots into meal is a likely source of rhythm created by early humans. Read more ...

Earliest music instruments found   BBC - May 26, 2012
Researchers have identified what they say are the oldest-known musical instruments in the world. The flutes, made from bird bone and mammoth ivory, come from a cave in southern Germany which contains early evidence for the occupation of Europe by modern humans - Homo sapiens. Scientists used carbon dating to show that the flutes were between 42,000 and 43,000 years old.

One of the flutes has been fashioned from mammoth ivory.

These results are consistent with a hypothesis made several years ago that the Danube River was a key corridor for the movement of humans and technological innovations into central Europe between 40,000-45,000 years ago. Geissenkloesterle is one of several caves in the region that has produced important examples of personal ornaments, figurative art, mythical imagery and musical instruments. 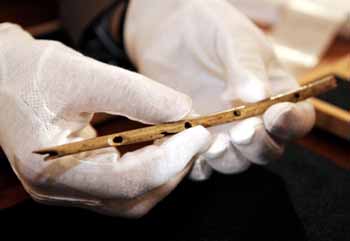 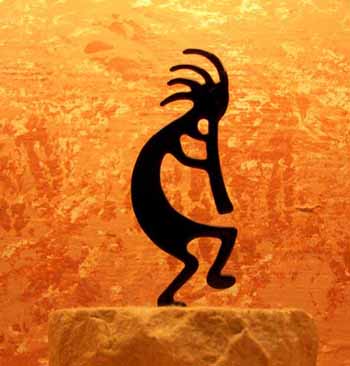 Ancient hunters painted the sections of their cave dwellings where singing, humming and music sounded best, a new study suggests. Analyzing the famous, ochre-splashed cave walls of France, the most densely painted areas were also those with the best acoustics, the scientists found. Humming into some bends in the wall even produced sounds mimicking the animals painted there. The Upper Paleolithic people responsible for the paintings had likely fine-tuned their hearing to recognize the sound qualities in certain parts of the cave and chose to do their artwork there as a kind of landmark, perhaps as part of a singing ritual, said researcher Iegor Reznikoff, a specialist in ancient music at the University of Paris X in Nanterre. Reznikoff will present his findings at the upcoming Acoustical Society of America meeting in Paris, France. 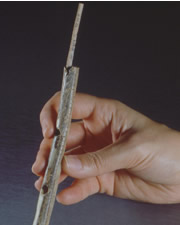 A 30,000-year-old instrument is uncovered in southern Germany. One of the world's oldest known musical instruments has been discovered by German archaeologists. The 18.7-centimetre-long flute, which is carved from mammoth ivory, has three finger holes and would have been capable of playing relatively complex melodies. The flute was found in 31 pieces in the Geienklosterle cave in mountains near Ulm in southern Germany. Two other flutes made of swan bones were discovered at the site more than a decade ago.

The three are much older than any other musical instrument yet discovered. They dated the age of the deposits where the three flutes were found to between 30,000 and 37,000 years old. But it is the extraordinary sophistication of the newly discovered instrument that sets it apart from the swan-bone flutes. This third flute is like a Rolls Royce compared with a Hyundai. Its makers used mammoth ivory, the highest quality material available to them at the time, he says. Carving a flute from solid ivory is much more demanding than making a flute from bird bones, which are already hollow. The crooked mammoth tusk had to be split and the two halves carefully hollowed out, then bound and glued together along a perfectly airtight seam.

The flute's makers lived in the Upper Palaeolithic era of the last ice age, a period when Europe was occupied simultaneously by the last Neanderthals and the first modern humans. The inhabitants of the region were adept artisans, and small ivory figurines, which are among the earliest known examples of figurative art, have been found in several sites. Southern Germany may have been one of the places where human culture originated. A few fragments of the Stone Age flute are missing, but to investigate what kind of music the instrument would have made. They don't seem to follow a diatonic scale, he notes, but rather the rules of the pentatonic scale that predominates in Asia.