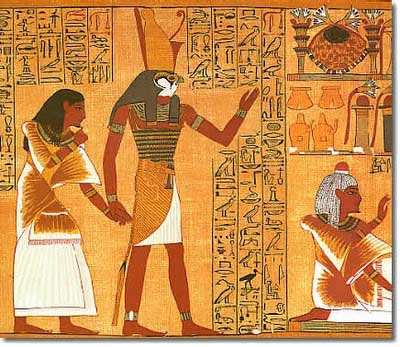 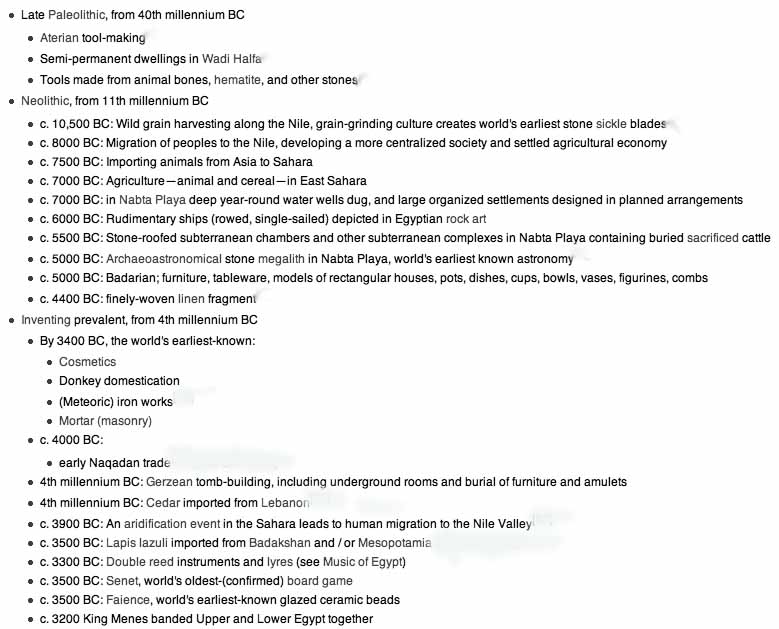 The Predynastic period is generally divided into cultural periods named after the places where a certain type of Egyptian settlement was first located. However, the same gradual development that characterizes the Protodynastic period is present throughout the entire Predynastic period, and individual "cultures" must not be interpreted as separate entities but as largely subjective divisions used to facilitate easier study of the entire period.

Most archaeological sites in Egypt have been excavated only in Upper Egypt, because the silt of the Nile River was more heavily deposited at the Delta region, and most Delta sites from the Predynastic period have since been buried totally.

This timeline marks the first evidence of human civilization beginning to appear in Egypt. It is the period that preceded the invention of writing and recording, a period that witnessed the first man recording his ideas and achievement and expressing himself using written language on papyrus. Discovered monuments contributed in clearing the vision over the prehistoric man through adding information about his origin, culture, religious beliefs, houses, tools and tombs.

Anthropological and archaeological evidence both indicate a grain-grinding Neolithic culture farming along the Nile in the 10th millennium BC using the world's earliest known type of sickle blades (Sources needed). But another culture of hunters, fishers and gathering peoples using stone tools replaced them.

Evidence indicates human habitation in the southwestern corner of Egypt, near the Sudan border, before 8000 BC.Climate changes and/or overgrazing around 8000 BC began to desiccate the pastoral lands of Egypt, eventually forming the Sahara (c. 2500 BC), and early tribes naturally migrated to the Nile river where they developed a settled agricultural economy and more centralized society.

There is evidence of pastoralism and cultivation of cereals in the East Sahara in the 7th millennium BC.

Domesticated animals had already been imported from Asia between 7500 BC and 4000 BC. Interestingly, the domestication of the pig in the Sahara and ancient Egypt has been cited as a likely primary contributor to the desertification of the Sahara.

The earliest known artwork of ships in ancient Egypt dates to 6000 BCE.

By 6,000 BC predynastic Egyptians in the southwestern corner of Egypt were herding cattle and constructing large buildings.

Subsistence in organized and permanent settlements in ancient Egypt by the middle of the 6th millennium BC centered predominantly on cereal and animal agriculture: cattle, goats, pigs and sheep.

Metal objects replaced prior ones of stone.

Tanning animal skins, pottery and weaving are commonplace in this era also.

There are indications of seasonal or only temporary occupation of the Al Fayyum in the 6th millennium BC, with food activities centering on fishing, hunting and food-gathering.

Burial items in this era include pottery, jewelry, farming and hunting equipment, and assorted foods including dried meat and fruit . The dead are buried facing due west.

Baskets of exceedingly high quality date to circa 5000 BC.

Items dating to this era of the Al Fayyum (5200 BC-4000 BC) include: axes of basalt, dolerite and limestone; a diorite mace head; dolerite vase; a wooden sickle and sickle blades; arrowheads; stone palettes and grain rubbers; silos; dishes, cups, bowls and pots; as well as beads of amazonite (feldspar).

Furniture, tableware, decorated pots and vases, combs and figurines all appear around this time.

Social stratification has been inferred from the burying of more prosperous members of the community in a different part of the cemetery.

Around 4500 BC the Naqada culture begins, with geometric, human- and animal-shaped designs adorning pottery, both carved and painted.

Shapes of vessels become specialized depending on function.

Models of rectangular houses (included in grave goods) also appear in this era.

A finely woven linen fragment in the Al Fayyum dates to 4400 BC.

By 4000 BC we have evidence of pre-dynastic alchemists having invented the use of mortar (masonry) via one of the oldest known of chemical reactions.

By 4000 BC human, animal, and other designs on pottery become more realistic [23]. Tomb-building appears in the Gerzean culture, including underground rooms with furniture and amulets.

Gerzean practices would later evolve into the Osiris cult of ancient Egypt.

By the beginning of the 4th millennium BC, ancient Egyptians in Maadi were importing numerous items of pottery from south Naqada and Canaan.

The economy of Maadi seems to have centered on metallurgy and foreign trade.

Many vessels made of black basalt also appear at this time.

There is evidence of the use of wooden posts in Maadi, maybe for buildings and/or fences. Also found are fire places and pits.

The earliest known buildings of stone to appear in ancient Egypt date to this era in Maadi, including one subterranean building that was constructed by covering walls of stone with Nile mud, another building thats entrance seems to have been fashioned by carving the local bedrock, and other building designs which also reveal distant southern Canaanite contact.

Lapis lazuli was being traded from its only known source in the ancient world - Badakshan, in what is now northeastern Afghanistan - as far as Mesopotamia and Egypt by the second half of the 4th millennium BC. There is evidence that ancient Egyptian explorers may have originally cleared and protected some branches of the Silk Road.

Between 1979 and 1985, charcoal samples found in the tombs of Nekhen, which were dated to the Naqada I and II periods, were identified as cedar from Lebanon.

The Protodynastic Period of Egypt (generally dated 3200 BC to 3000 BC) refers to the period of time at the very end of the Predynastic Period. It is equivalent to the archaeological phase known as Naqada III. It is sometimes known as Late Predynastic Period or Dynasty 0. The Narmer Palette, thought to mark the unification of Upper and Lower Egypt, note the images of Hathor at the top and bottom as well as the lionesses, symbols of Sekhmet, forming the central intertwined image The Protodynastic Period is characterised as being the time when ancient Egypt was undergoing the process of political unification, leading to a unified state during the Early Dynastic Period.

Furthermore, it is during this time when the Egyptian language was first being recorded in hieroglyphs. There is also strong archaeological evidence of Egyptian settlements in southern Kanaan during the Protodynastic Period, which have been regarded as colonies or trading entreats.

State formation began during this era and perhaps even earlier. Various small city-states arose along the Nile. Centuries of conquest reduced Upper Egypt to three major states: Thinis, Naqada, and Nekhen. Being sandwiched by Thinis and Nekhen, Naqada was the first to fall. Thinis then conquered Lower Egypt. Nekhen's relationship with Thinis is uncertain but these two states may have merged peacefully with the Thinite royal family ruling all of Egypt. The Thinite kings are buried at Abydos in the Umm el-Qa'ab cemetery.

Most Egyptologists consider Narmer to be the last king of this period (although some place him in the First Dynasty), as well as the so-called "Scorpion King(s)", whose name may refer to, or be derived from, the goddess, Serket, a special early protector of other deities and the rulers.