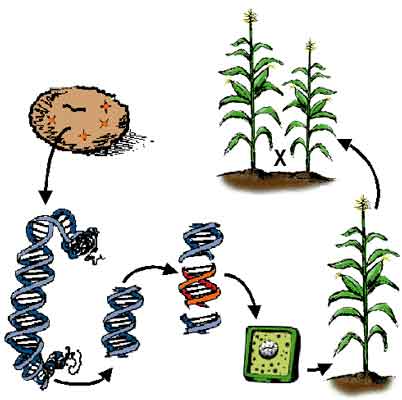 Plant breeding is the art and science of changing the genetics of plants for the benefit of humankind. Plant breeding can be accomplished through many different techniques ranging from simply selecting plants with desirable characteristics for propagation, to more complex molecular techniques.

Plant breeding has been practiced for thousands of years, since near the beginning of human civilization. It is now practiced worldwide by individuals such as gardeners and farmers, or by professional plant breeders employed by organizations such as government institutions, universities, crop-specific industry associations or research centers.

International development agencies believe that breeding new crops is important for ensuring food security by developing new varieties that are higher-yielding, resistant to pests and diseases, drought-resistant or regionally adapted to different environments and growing conditions.

Plant breeding in certain situations may lead the domestication of wild plants. Domestication of plants is an artificial selection process conducted by humans to produce plants that have more desirable traits than wild plants, and which renders them dependent on artificial (usually enhanced) environments for their continued existence. The practice is estimated to date back 9,000-11,000 years. Many crops in present day cultivation are the result of domestication in ancient times, about 5,000 years ago in the Old World and 3,000 years ago in the New World.

In the Neolithic period, domestication took a minimum of 1,000 years and a maximum of 7,000 years. Today, all of our principal food crops come from domesticated varieties. Almost all the domesticated plants used today for food and agriculture were domesticated in the centers of origin. In these centers there is still a great diversity of closely related wild plants, the so called crop wild relatives that can also be used for improving modern cultivars by plant breeding.

A plant whose origin or selection is due primarily to intentional human activity is called a cultigen, and a cultivated crop species that has evolved from wild populations due to selective pressures from traditional farmers is called a landrace. Landraces, which can be the result of natural forces or domestication, are plants (or animals) that are ideally suited to a particular region or environment. An example are the landraces of rice, Oryza sativa subspecies indica, which was developed in South Asia, and Oryza sativa subspecies japonica, which was developed in China.

Classical plant breeding uses deliberate interbreeding (crossing) of closely or distantly related individuals to produce new crop varieties or lines with desirable properties. Plants are crossbred to introduce traits/genes from one variety or line into a new genetic background. For example, a mildew-resistant pea may be crossed with a high-yielding but susceptible pea, the goal of the cross being to introduce mildew resistance without losing the high-yield characteristics.

Classical breeding relies largely on homologous recombination between chromosomes to generate genetic diversity. The classical plant breeder may also makes use of a number of in vitro techniques such as protoplast fusion, embryo rescue or mutagenesis to generate diversity and produce hybrid plants that would not exist in nature.

Traits that breeders have tried to incorporate into crop plants in the last 100 years include:

Intraspecific hybridization within a plant species was demonstrated by Charles Darwin and Gregor Mendel, and was further developed by geneticists and plant breeders. In the early 20th century, plant breeders realized that Mendel's findings on the non-random nature of inheritance could be applied to seedling populations produced through deliberate pollinations to predict the frequencies of different types.

In 1908, George Harrison Shull described heterosis, also known as hybrid vigor. Heterosis describes the tendency of the progeny of a specific cross to outperform both parents. The detection of the usefulness of heterosis for plant breeding has led to the development of inbred lines that reveal a heterotic yield advantage when they are crossed. Maize was the first species where heterosis was widely used to produce hybrids.

By the 1920s, statistical methods were developed to analyze gene action and distinguish heritable variation from variation caused by environment. In 1933, another important breeding technique, cytoplasmic male sterility (CMS), developed in maize, was described by Marcus Morton Rhoades. CMS is a maternally inherited trait that makes the plant produce sterile pollen. This enables the production of hybrids without the need for labour intensive detasseling.

These early breeding techniques resulted in large yield increase in the United States in the early 20th century. Similar yield increases were not produced elsewhere until after World War II, the Green Revolution increased crop production in the developing world in the 1960s.

When distantly related species are crossed, plant breeders make use of a number of plant tissue culture techniques to produce progeny from otherwise fruitless mating. Interspecific and intergeneric hybrids are produced from a cross of related species or genera that do not normally sexually reproduce with each other. These crosses are referred to as Wide crosses. For example, the cereal triticale is a wheat and rye hybrid. The cells in the plants derived from the first generation created from the cross contained an uneven number of chromosomes and as result was sterile. The cell division inhibitor colchicine was used to double the number of chromosomes in the cell and thus allow the production of a fertile line.

Failure to produce a hybrid may be due to pre- or post-fertilization incompatibility. If fertilization is possible between two species or genera, the hybrid embryo may abort before maturation. If this does occur the embryo resulting from an interspecific or intergeneric cross can sometimes be rescued and cultured to produce a whole plant. Such a method is referred to as Embryo Rescue. This technique has been used to produce new rice for Africa, an interspecific cross of Asian rice (Oryza sativa) and African rice (Oryza glaberrima).

Hybrids may also be produced by a technique called protoplast fusion. In this case protoplasts are fused, usually in an electric field. Viable recombinants can be regenerated in culture.

Chemical mutagens like EMS and DMS, radiation and transposons are used to generate mutants with desirable traits to be bred with other cultivars. Classical plant breeders also generate genetic diversity within a species by exploiting a process called somaclonal variation, which occurs in plants produced from tissue culture, particularly plants derived from callus. Induced polyploidy, and the addition or removal of chromosomes using a technique called chromosome engineering may also be used.

It should be noted that with classical breeding techniques, the breeder does not know exactly what genes have been introduced to the new cultivars. Some scientists therefore argue that plants produced by classical breeding methods should undergo the same safety testing regime as genetically modified plants. There have been instances where plants bred using classical techniques have been unsuitable for human consumption, for example the poison solanine was unintentionally increased to unacceptable levels in certain varieties of potato through plant breeding. New potato varieties are often screened for solanine levels before reaching the marketplace.

Modern plant breeding uses techniques of molecular biology to select, or in the case of genetic modification, to insert, desirable traits into plants.

Sometimes many different genes can influence a desirable trait in plant breeding. The use of tools such as molecular markers or DNA fingerprinting can map thousands of genes. This allows plant breeders to screen large populations of plants for those that possess the trait of interest. The screening is based on the presence or absence of a certain gene as determined by laboratory procedures, rather than on the visual identification of the expressed trait in the plant.

Genetic modification of plants is achieved by adding a specific gene or genes to a plant, or by knocking out a gene with RNAi, to produce a desirable phenotype. The plants resulting from adding a gene are often referred to as transgenic plants. If for genetic modification genes of the species or of a crossable plant are used under control of their native promoter, then they are called Cisgenic plants. Genetic modification can produce a plant with the desired trait or traits faster than classical breeding because the majority of the plant's genome is not altered.

To genetically modify a plant, a genetic construct must be designed so that the gene to be added or removed will be expressed by the plant. To do this, a promoter to drive transcription and a termination sequence to stop transcription of the new gene, and the gene or genes of interest must be introduced to the plant. A marker for the selection of transformed plants is also included. In the laboratory, antibiotic resistance is a commonly used marker: plants that have been successfully transformed will grow on media containing antibiotics; plants that have not been transformed will die. In some instances markers for selection are removed by backcrossing with the parent plant prior to commercial release.

The construct can be inserted in the plant genome by genetic recombination using the bacteria Agrobacterium tumefaciens or A. rhizogenes, or by direct methods like the gene gun or microinjection. Using plant viruses to insert genetic constructs into plants is also a possibility, but the technique is limited by the host range of the virus. For example, Cauliflower mosaic virus (CaMV) only infects cauliflower and related species. Another limitation of viral vectors is that the virus is not usually passed on the progeny, so every plant has to be inoculated.

The majority of commercially released transgenic plants, are currently limited to plants that have introduced resistance to insect pests and herbicides. Insect resistance is achieved through incorporation of a gene from Bacillus thuringiensis (Bt) that encodes a protein that is toxic to some insects. For example, the cotton bollworm, a common cotton pest, feeds on Bt cotton it will ingest the toxin and die. Herbicides usually work by binding to certain plant enzymes and inhibiting their action. The enzymes that the herbicide inhibits are known as the herbicides target site. Herbicide resistance can be engineered into crops by expressing a version of target site protein that is not inhibited by the herbicide. This is the method used to produce glyphosate resistant crop plants

Genetic modification of plants that can produce pharmaceuticals (and industrial chemicals), sometimes called pharmacrops, is a rather radical new area of plant breeding.