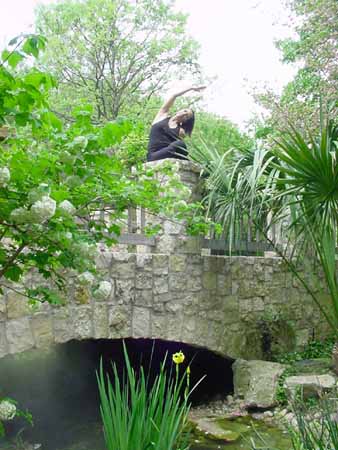 Pilates is a growing method of achieving synchronicity and balance through exercise. The first official Pilates Studio was opened here in New York City in 1926, and continues to grow along with Yoga studios. Some combine Pilates with Yoga to form Yogilates.

The Pilates Method is a physical fitness system which was developed in the early 20th century by German-American Joseph Pilates. It has to do with stretching. Joseph Pilates called the method 'The Art of Contrology', which refers to the way the method encourages the use of the mind to control the muscles.

Instead of performing many repetitions of each exercise, Pilates preferred fewer, more precise movements, requiring proper control and form. He designed more than 500 specific exercises. The most frequent form, called "matwork", involves a series of calisthenic motions performed without weight or apparatus on a padded mat. Pilates also designed five major pieces of unique exercise equipment that can be optionally used. In all forms, the "powerhouse" (abdomen, lower back, and buttocks) is supported and strengthened, enabling the rest of the body to move freely.

In terms of physical exercise Pilates exercise resembles yoga but without the spiritual element. It was originally used to bring injured dancers back to full fitness, the idea being more to build bodily co-ordination and flexibility than stamina or muscle strength. It has been used to train dancers in flexibility and physical strength. In recent years it has become a popular fitness modality. Read more ...