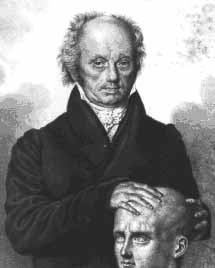 Phrenology is a pseudoscience which involves the measurement of bumps on the skull to predict mental traits. It is based on the concept that the brain is the organ of the mind, and that certain brain areas have localized, specific functions or modules. Although both of those ideas have a basis in reality, phrenology generalized beyond empirical knowledge in a way that departed from science. The central phrenological notion that measuring the contour of the skull can predict personality traits is discredited by empirical research. Developed by German physician Franz Joseph Gall in 1796, the discipline was influential in the 19th century, especially from about 1810 until 1840. The principal British centre for phrenology was Edinburgh, where the Edinburgh Phrenological Society was established in 1820.

Phrenology is today recognized as pseudoscience. The methodological rigor of phrenology was doubtful even for the standards of its time, since many authors already regarded phrenology as pseudoscience in the 19th century. Phrenological thinking was influential in the psychiatry and psychology of the 19th century. Gall's assumption that character, thoughts, and emotions are located in specific areas of the brain is considered an important historical advance toward neuropsychology.

While phrenology itself has long been discredited, the study of the inner surface of the skulls of archaic human species allows modern researchers to obtain information about the development of various areas of the brains of those species, and thereby infer something about their cognitive and communicative abilities, and possibly even something about their social life. Due to its limitations, this technique is sometimes criticized as "paleo-phrenology". Read more


Phrenology is the study of the structure of the skull to determine a person's character and mental capacity. This pseudoscience is based upon the false assumption that mental faculties are located in brain "organs" on the surface of the brain and can be detected by visible inspection of the skull.

The Viennese physician Franz-Joseph Gall (1758-1828) claimed there are some 26 "organs" on the surface of the brain which affect the contour of the skull, including a "murder organ" present in murderers. Gall was an advocate of the "use it or lose it" school of thought. Brain organs which were used got bigger and those which were not used shrunk, causing the skull to rise and fall with organ development. These bumps and indentations on the skull, according to Gall, reflect specific areas of the brain that determine a person's emotional and intellectual functions. Gall called the study of these cranial hills and valleys "cranioscopy."

Others, such as Johann Kaspar Spurzheim (1776-1832) who spread the word in America and George Combe (1788-1858) who founded the Edinburgh Phrenological Society, followed with even zanier and more specious divisions and designations of the brain and skull, such as "metaphysical spirit" and "wit." In 1815, Thomas Foster called the work of Gall and Spurzheim "phrenology" (phrenos is Greek for mind) and the name stuck.

Phrenology advanced the correct notions that the human brain is the seat of character, emotions, perception, intellect, etc., and that different parts of the brain are responsible for different mental functions. However, in Gall's time it was only possible to study the brains of the dead; thus, phrenologists could only associate the different structures in the brain with supposed mental functions that were in turn associated with the contour of the skull. Little was done to study the brains or the behavior of persons known to have had neurological problems, which might have helped in the process of locating parts of the brain responsible for specific neurological functioning. Instead, mental faculty localization was arbitrarily selected. Gall's early work was with criminals and the insane and his brain "organs" reflected this interest. Spurzheim got rid of "theft organs" and "murder organs," but he mapped out areas for "benevolence," "self-esteem," and "conjugal love."

Although phrenology has been thoroughly discredited and has been recognized as having no scientific merit, it still has its advocates. It remained popular, especially in the United States, throughout the 19th century and it gave rise to several other pseudoscientific characterologies, e.g., craniometry and anthropometry. Phrenology was highly praised by Ralph Waldo Emerson, Horace Mann, Thomas Edison, and Alfred Russell Wallace.

The Boston Medical Society welcomed Spurzheim as a heroic figure when he arrived in 1832 for The American Tour. The Fowler Brothers and Samuel Wells published the American Phrenological Journal and Life Illustrated, which lasted from 1838 until 1911. In Edinburgh, Combe's Phrenological Journal was published from 1823 until 1847. Another indication of the popularity of phrenology in the 19th century is that Combe's The Constitution of Man sold more than 300,000 copies between 1828 and 1868.

It is difficult to explain the early popularity of phrenology among scientists, since the empirical evidence for a direct relationship between the brain and character was scant. An unplanned experiment provided some solid evidence for such a relationship in 1848 when Phineas Gage's moral character changed dramatically after an explosion blew a tamping iron through his head (Damasio).

Gage was leading a railroad construction crew near Cavendish, Vermont, when the accident occurred. "Before the accident he had been a most capable and efficient foreman, one with a well-balanced mind, and who was looked on as a shrewd smart business man." After the accident, he became "fitful, irreverent, and grossly profane, showing little deference for his fellows. He was also impatient and obstinate, yet capricious and vacillating, unable to settle on any of the plans he devised for future action." On the other hand, one might conclude that the Gage incident blew a hole through the theory that bumps on the head were the keys to the functions of the brain beneath.

Phrenology gave rise to the invention of the psychograph by Lavery and White, a machine which could do a phrenological reading complete with printout. It is said that this device netted its owners about $200,000 at the 1934 Century of Progress Exposition in Chicago. Phrenological readings are not unlike astrological readings and many who have them done are satisfied that the results are uncannily accurate. The reason for this satisfaction is probably due subjective validation rather than to objective scientific data.