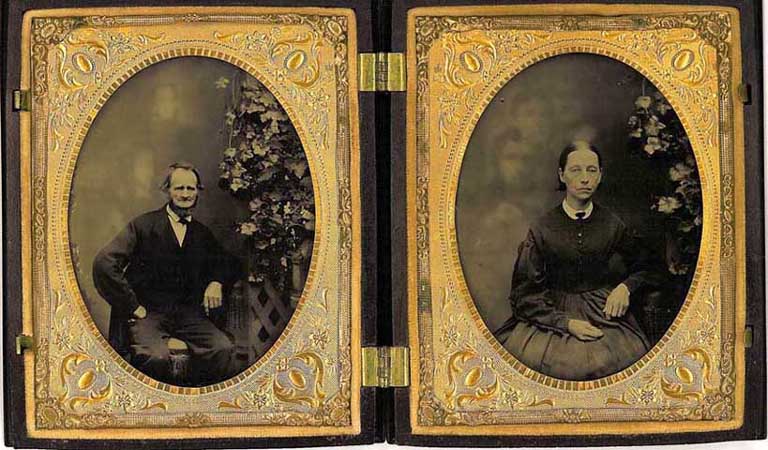 I received 2 photos from a reader named Debbie along with this information about them beginning with the tintype photo above.

The people in the photos are not my ancestors, so I don't know very much about them. I collect 19th Century photography. I purchased a box of photographs and letters passed down in a family for generations, and these were among them.

From what I can gather from the letters, and the people identified in the other photos, the family lived in upstate New York and were Spiritualists. They speak very nonchalant about receiving messages from the other side.Ę Some of the family names, from what I can tell,Ęwere 'Owens', 'Nowland', and 'Carpenter'.ĘI need to do some more work deciphering the content of the letters which are very hard to read.

Ę I have studied spirit photography for several years now and have shown these to some of the top photo collectors, appraisers, museums, and psychics, and they have all said that they're the best they've ever seen.

A well known psychic said she was certain the 'extras' were definitely family members of the sisters and requested copies to hang in her office.

Ę I own several 'standard' spirit photographs on paper, but these tintypes are so beautifully done.Ę Under strong magnification there is no indication of manipulation. Therefore, the real question is, "How were they done when there was no negative involved in the tintype process?"

Also, you have to remember that these were probably taken sometime in the 1860s, using only the processes they had available at the time.Ę

Tintypes were the 'grandfather' of the Polaroid, with just one unique image - no copies - unless you took a photo of the photo. To have done that over and over again would have been very difficult, and the results would not have been very clear.

Even ambrotypes, another process used at the time, which were negatives on glass and then backed with black so they appeared positive, would have been much easierto manipulate.

The only other tintype spirit photographs that I have found have only one or two 'extras' in them, who could have simply stepped out of the image area before the developing of the plate was completed.Ę

On the photo I have, there are over 15 'extras' on just the one with the female sitter, including 4 or 5 in her lap! Many of the 'extras' do not show up very well on the scan, but can be seen clearly under magnification in person. Perhaps they used an elaborate setup with mirrors?Ę Who knows?Ę

They could also be tintype photos taken of paper photographs whose negatives had been manipulated, but they are so clear, AND I have yet to see paper spirit photographs, done at the time, done so well.

I should also mention that they are '1/4 Plates' which are larger than the standard, smaller tintypes that were much more popular.

They both measure approx. 3 1/4 X 4 1/4 inches and are housed in a nice thermoplastic case (one of the first forms of plastic) manufactured by Littlefield, Parsons & Co., which was one of the largest photo case manufacturers up until about 1866.

Anyway, I saw that it was mentioned on your website that you never see early spirit tintypes, so I thought I would send you a scan of mine.Ę I must say that you have some really awesome examples posted on your website!

Of course, I can't say exactly how they were created, or if they are the 'real thing', and I'll probably never know for sure, but you have to admit that they are pretty intriguing!Ę

I wish I knew who the photographer was, but there is no indication, which was common with tintypes.

After doing all this research I realized that I have taken a couple spirit photos myself in the past long before I even knew what spirit photography was! 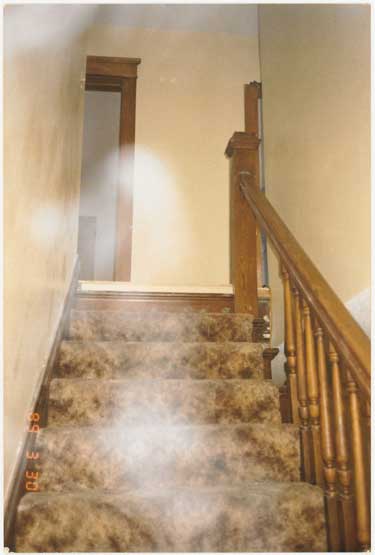 This one is on the stairway of my sister's 19th Century home,
that I took with a 35 mm camera years ago.

We live in an area that was known to be a 'sacred and neutral zone' along a river where, according to historical records, Native American Indian tribes were not allowed to fight because it was sacred burial ground. We have also found confirmed bison bones on our property, datingĘback 1,000s of years, probably due to the close proximity of the river.