A pheromone is any chemical or set of chemicals produced by a living organism that transmits a message to other members of the same species. There are alarm pheromones, food trail pheromones, sex pheromones, and many others that affect behavior or physiology. Their use among insects has been particularly well documented, although many vertebrates and plants also communicate using pheromones.

Insect pheromones of pest species, such as the Japanese beetle and the gypsy moth, can be used to trap them for monitoring purposes or for control by creating confusion, disrupting mating and preventing them from laying eggs. Bombykol is a chemically well-characterized pheromone released by the female silkworm to attract mates.

In mammals and reptiles, pheromones may be detected by the vomeronasal organ, or Jacobson's organ, which lies between the nose and mouth, although some are detected by regular olfactory membranes.

Terence McKenna proposed in his book "Food of the Gods" the controversial idea of exopheromones as chemical signals between members of different species, as opposed to among conspecifics. He suggested that certain chemicals produced in abundance in various hallucinogenic plants and fungi, such as dimethyltriptamine and psilocybin may act as pheromones produced by one species (the vegetal) waiting for absorption by various others (for example, early primates or hominids). In this way a kind of ecological pheromonal system may be at work among species and ecosystems that have coevolved closely for long stretches of time.

The term "pheromone" was introduced by Peter Karlson and Adolf Butenandt in 1959, based on the Greek pherein (to transport) and hormon (to stimulate). They proposed the term to describe chemical signals from conspecifics which elicit innate behaviours soon after Butenandt characterized the first such chemical, bombykol.

Laid down in the environment, these pheromones mark the boundaries of an organism's territory. In dogs, these hormones are present in the urine, which they deposit on landmarks serving to mark the perimeter of the claimed territory.

These pheromones are common in social insects. For example, ants mark their paths with these pheromones, which are non-volatile hydrocarbons. Certain ants lay down an initial trail of pheromones as they return to the nest with food. This trail attracts other ants and serves as a guide. As long as the food source remains, the pheromone trail will be continually renewed. The pheromone must be continually renewed because it evaporates quickly. When the supply begins to dwindle, the trailmaking ceases. In at least one species of ant, trails that no longer lead to food are also marked with a repellent pheromone.

Some species release a volatile substance when attacked by a predator that can trigger flight (in aphids) or aggression (in bees) in members of the same species. Pheromones also exist in plants:certain plants emit alarm pheromones when grazed upon, resulting in tannin production in neighboring plants. These tannins make the plants less appetizing for the herbivore.

In animals, sex pheromones indicate the availability of the female for breeding. Many insect species release sex pheromones to attract a mate and many lepidopterans can detect a potential mate from as far away as 10 km. Pheromones can be used in gametes to trail the opposite sex's gametes for fertilization. Pheromones are also used in the detection of estrus in sows. Boar pheromones are sprayed into the sty, and those sows which exhibit sexual arousal are known to be currently available for breeding. Male animals also emit pheromones that convey information about what species they are, and their genotype.

Recognized in insects, these pheromones are different than territory pheromones. According to Fabre (translated from French), "Females who lay their eggs in these fruits deposit these mysterious substances in the vicinity of their clutch to signal to other females of the same species so that they will clutch elsewhere."

Produced by one or the other sex, these pheromones attract individuals of both sexes.


Other Pheromones - (not yet classified)

This classification, based on the effects on behavior, remains artificial. Pheromones fill many additional functions. 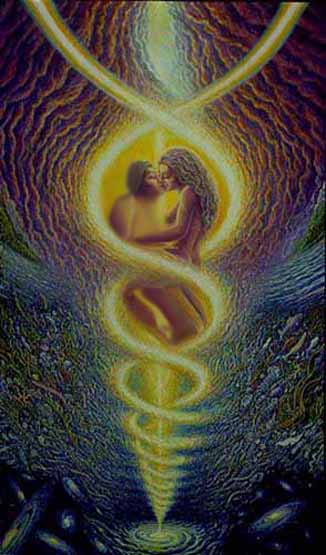 Some commercially-available substances are advertised using claims that the products contain sexual pheromones and can act as an aphrodisiac. These often lack credence due to an excessive marketing of pheromones by unsolicited e-mail. Moreover, despite claims to the contrary, no defined pheromonal substance has ever been demonstrated to influence human behavior in a peer reviewed, published study.

Nevertheless, a few well-controlled scientific studies have been published demonstrating the possibility of pheromones in humans. The best-studied case involves the synchronization of menstrual cycles among women based on unconscious odor cues (the so called McClintock effect, named after the primary investigator).

This study states that there are two types of pheromone involved: "One, produced prior to ovulation, shortens the ovarian cycle, and the second, produced just at ovulation, lengthens the cycle". This is analogous to the Whitten effect, a male pheromone mediated modulation of estrus observed in mice.

Other studies have suggested that people might be using odor cues associated with the immune system to select mates who are not closely related to themselves.

Pheromones in humans are postulated to be produced by the apocrine glands. The apocrine glands become functional after reaching puberty which, some believe, could contribute to people developing a sexual attraction for others at that time. Pheromone detection has also been proposed to be the reason why a person can sense "chemistry", or feel an instant attraction or dislike when first meeting someone.

Using a brain imaging technique, Swedish researchers have shown that homosexual and heterosexual men respond differently to two odors that may be involved in sexual arousal, and that the gay men respond in the same way as women. This research suggests a possible role for human pheromones in the biological basis of sexual orientation. Read more ... Wikipedia