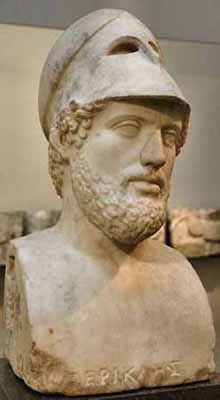 was a prominent and influential Greek statesman, orator and general of Athens during its golden age Ŵ specifically the time between the Persian and Peloponnesian wars. He was descended, through his mother, from the powerful and historically influential Alcmaeonid family. Pericles had such a profound influence on Athenian society that Thucydides, a contemporary historian, acclaimed him as "the first citizen of Athens". Pericles turned the Delian League into an Athenian empire, and led his countrymen during the first two years of the Peloponnesian War. The period during which he led Athens, roughly from 461 to 429 BC, is sometimes known as the "Age of Pericles", though the period thus denoted can include times as early as the Persian Wars, or as late as the next century.

Pericles promoted the arts and literature; it is principally through his efforts that Athens acquired the reputation of being the educational and cultural center of the ancient Greek world. He started an ambitious project that generated most of the surviving structures on the Acropolis (including the Parthenon). This project beautified and protected the city, exhibited its glory, and gave work to the people. Pericles also fostered Athenian democracy to such an extent that critics call him a populist. He, along with several members of his family, succumbed to the Plague of Athens in 429 BC, which weakened the city-state during a protracted conflict with Sparta.

Pericles was an influential and important leader of Athens during the Athenian Golden Age, specifically, between the Persian and Peloponnesian wars, descending from the Alcmaeonidae family. The period from 461 BC to 379 BC is sometimes known as "The Age of Pericles". He was responsible for a great many building projects which include most of the surviving structures on the Acropolis (including the Parthenon). He also persuaded the city to build the Long Walls that protected the four-mile route to Peiraeus, the port for Athens. Of particular importance, he fostered the power of democracy, which was a very radical idea.

Pericles started his political career at an early age. At first, however, he restrained his ambitions because he was fearful that due to his social standing, he would be considered to be a tyrant or even dangerous for Greece. To get around this problem, he promoted the interests of the demos -- the most numerous class of middle and low income citizens -- so as to avoid their suspicion.

Largely due to the teachings of Anaxagoras, Pericles was very careful of the way in which he spoke, and what he chose to say.

Cimon was a political rival of Pericles for many years. Cimon was a wealthy man who gained favor with the people by spending his own money on feeding, clothing and caring for those Athenians who needed assistance. To counter Cimon, Pericles spent public money in building projects. Pericles even was eventually able to have Cimon ostracized and banished from the city for a period of time. However, before his period of exile was up, Cimon returned to lead Athenians in a battle against Sparta. Unfortunately, some friends of Pericles had Cimon sent away and the battle went badly for the Athenians. At that point, Pericles was able to look past his own ambitions, and recalled Cimon so that Athens might be victorious.

Pericles then set about strengthening Athens and improving the infrastructure. However, during his forty-year predominance, he was cautious and did not take on opponents without first weighing his options and measuring his potential losses.

Unfortunately, his infatuation with a woman named Aspasia would slightly change the way in which he initiated conflicts. According to Plutarch, Pericles was persuaded by her to mount an expedition against one of her enemies.

Pericles is often referred to as the founder of democracy in Athens. However, recent critical studies have cast doubt on this and describe the formation of democracy as a slow process. The credit for creating the first democracy on earth goes to social, political and economic circumstances which a single individual could influence, but not create.

Pericles began to fall out of favor in Athens while still being able to maintain power. The Spartans attacked and he ordered that Athens should prepare for a siege. Unfortunately, during the siege, a plague spread through Athens and its allies, but not to its enemies, killing many, including Pericles himself and most of his family. However, after Pericles lost his last Athenian son, the Athenians allowed a change in the law that made Pericles' non-Athenian son a citizen and legitimate heir.

Unfortunately the information we have about Pericles is highly distorted by centuries of legends and myth. The biography most people rely on is written by Plutarch, who lived about 500 years after Pericles. Plutarch was more interested in studying the character of men than in writing history. Pericles is also featured in Thucydides' History of the Peloponnesian War, which includes accounts of several of Pericles' speeches.

The speeches of Pericles were not written down and preserved. However, Thucydides in his history of the Peloponnesian War provides some idea of Pericles' power as an orator.

The funeral oration that he has Pericles deliver in honor of the dead during the first year of the Peloponnesian War is especially noble: "Of all cities Athens alone is even greater than her fame."

She needs no poet to sing her praises; every land and every sea can furnish proofs of her enterprise and success.

Her enemies when defeated are not disgraced; her subjects confess that she is worthy to rule them." Of Athens' dead he says: "To men who fall as they have fallen death is no evil."

For the whole Earth is the Sepulchre of famous men; and their story is not graven only on Stone over their native earth, but lives on far away, without visible symbol, woven into the stuff of other men's lives.

Pericles on the eve of war. "Nor is it any longer possible for you to to give up this empire . . . Your empire is now like a tyranny: it may have been wrong to take it; it is certainly dangerous to let it go."

But the bravest are surely those who have the clearest vision of what is before them, glory and danger alike, and yet notwithstanding go out to meet it. -- Thucydides' History of the Peloponnesian War

Freedom is the sure possession of those alone who have the courage to defend it.

Future ages will wonder at us, as the present age wonders at us now.

If Athens shall appear great to you, consider then that her glories were purchased by valiant men, and by men who learned their duty.

Instead of looking on discussion as a stumbling block in the way of action, we think it an indispensable preliminary to any wise action at all.

Time is the king of all men, he is their parent and their grave, and gives them what he will and not what they crave.

Wait for that wisest of all counselors, Time.