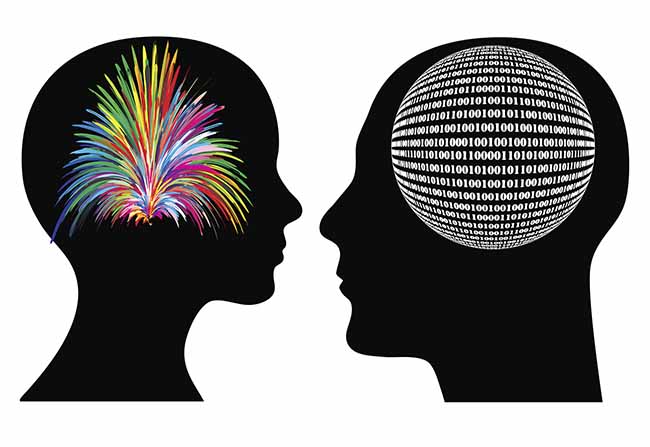 In philosophy, psychology, and cognitive science, perception is the organization, identification, and interpretation of sensory information in order to represent and understand the environment. All perception involves signals in the nervous system, which in turn result from physical or chemical stimulation of the sense organs. For example, vision involves light striking the retina of the eye, smell is mediated by odor molecules, and hearing involves pressure waves. Perception is not the passive receipt of these signals, but is shaped by learning, memory, expectation, and attention.

Perception can be split into two processes. Firstly, processing sensory input, which transforms these low-level information to higher-level information (e.g., extracts shapes for object recognition). Secondly, processing which is connected with a person's concepts and expectations (knowledge) and selective mechanisms (attention) that influence perception.

Perception depends on complex functions of the nervous system, but subjectively seems mostly effortless because this processing happens outside conscious awareness.

Since the rise of experimental psychology in the 19th Century, psychology's understanding of perception has progressed by combining a variety of techniques. Psychophysics quantitatively describes the relationships between the physical qualities of the sensory input and perception.

Sensory neuroscience studies the brain mechanisms underlying perception. Perceptual systems can also be studied computationally, in terms of the information they process. Perceptual issues in philosophy include the extent to which sensory qualities such as sound, smell or color exist in objective reality rather than in the mind of the perceiver.

Although the senses were traditionally viewed as passive receptors, the study of illusions and ambiguous images has demonstrated that the brain's perceptual systems actively and pre-consciously attempt to make sense of their input. There is still active debate about the extent to which perception is an active process of hypothesis testing, analogous to science, or whether realistic sensory information is rich enough to make this process unnecessary.

The perceptual systems of the brain enable individuals to see the world around them as stable, even though the sensory information is typically incomplete and rapidly varying. Human and animal brains are structured in a modular way, with different areas processing different kinds of sensory information. Some of these modules take the form of sensory maps, mapping some aspect of the world across part of the brain's surface. These different modules are interconnected and influence each other. For instance, taste is strongly influenced by smell.

Perception is one of the oldest fields in psychology. The oldest quantitative law in psychology is the Weber-Fechner law, which quantifies the relationship between the intensity of physical stimuli and their perceptual effects. The study of perception gave rise to the Gestalt school of psychology, with its emphasis on holistic approach.

What one perceives is a result of interplays between past experiences, including one's culture, and the interpretation of the perceived. Read more

When your eyes override your ears: New insights into the McGurk Effect   Science Daily - February 16, 2017

New model shows how the brain combines information from multiple senses. Seeing is not always believing -- visual speech (mouth movements) mismatched with auditory speech (sounds) can result in the perception of an entirely different message. This mysterious illusion is known as the McGurk Effect. Neuroscience researchers have created an algorithm to reveal key insight into why the brain can sometimes muddle up one of the most fundamental aspects of the human experience.

Researchers have unlocked the mystery of why people have seen so many different images in Rorschach inkblots. The image associations are induced by fractal characteristics at the edges of the blots and depend on the scaling parameters of the patterns, says researcher. Fractals are objects with irregular curves or shapes and are recognizable building blocks of nature. Trees, clouds, rivers, galaxies, lungs and neurons are fractals. The new discovery isn't about improving inkblots for psychological assessments -- their use became controversial and mostly set aside in the last 20 years. It does, however, have implications for Taylor's efforts to design a fractal based retinal implant and for potentially improving materials used for camouflage.


How does the brain make perceptual predictions over time?   Medical Express - February 6, 2017
Prediction is crucial for brain function - without forecasting, our actions would always be too late because of the delay in neural processing. However, there has been limited theoretical work explaining how our brains perform perceptual predictions over time. Prediction may be a general principle of cortical function along with the already-established role of inference. Largely missing from our understanding of brain function had been models akin to those routinely employed by meteorologists. In making their predictions, forecasters rely on past weather information to project climate conditions over the next several days. Similarly, the neural networks in our brains embody a type of model of our surroundings. However, we don't have a clear understanding of how they operate to make predictions. Existing theories of brain function and neural networks used in artificial intelligence use a hierarchical structure: sensory input comes in at one end and progressively more abstract representations are computed along the hierarchy