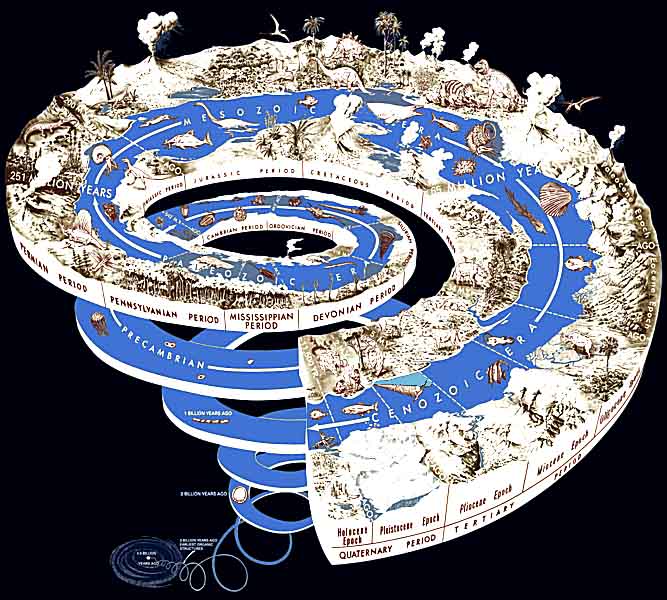 Paleontology is the study of the developing history of life on earth, of ancient plants and animals based on the fossil record, evidence of their existence preserved in rocks. This includes the study of body fossils, tracks, burrows, cast off parts, fossilized feces ("coprolites"), and chemical residues. The simplest definition is "the study of ancient life" Paleontology seeks information about several aspects of past organisms: "their identity and origin, their environment and evolution, and what they can tell us about the Earth's organic and inorganic past".

Modern paleontology sets ancient life in its contexts, by studying how long-term physical changes of global geography ("paleogeography") and climate ("paleoclimate") have affected the evolution of life, how ecosystems have responded to these changes and have changed the planetary environment in turn, and how these mutual responses have affected today's patterns of biodiversity. So paleontology overlaps with geology, the study of rocks and rock formations, and with botany, biology, zoology, and ecology, fields concerned with living creatures and how they interact. Palynology is the study of pollen, whether modern or geological.

There are many developing specialties such as paleoecology, paleobotany, ichnology (the study of tracks and burrows) and taphonomy, the study of what happens to organisms after they expire.

Major areas of study include the correlation of rock strata with their geologic ages and the study of evolution of lifeforms. Paleontology utilizes the same classic binomial nomenclature scheme devised for the biology of living things by the mid 18th century Swedish biologist Carolus Linnaeus and increasingly sets these species in a genealogical framework, showing their degrees of interrelatedness using the still somewhat controversial technique of "cladistics".

The primary economic importance of paleontology lies in the use of fossils to determine the age and nature of the rocks that contain them or the layers above or below. This information is vital to the mining industries and especially the petroleum industry. Simply looking at the fossils contained in a rock remains one of the fastest and most accurate means of telling how old that rock is.

Fossils were known by primitive man and were sometimes identified correctly as the remains of ancient lifeforms. The organized study of paleontology dates from the late 18th century.

Paleontologists are among the more colorful and eccentric figures in the history of science. Important figures include the Englishman William Smith who first noted that similar fossil sequences were found regionally and Georges Cuvier who initiated the study of ancient animals based on living animals.

History includes a number of prominent paleontologists. Charles Darwin collected fossils of South American mammals during his trip on the Beagle and examined petrified forests in Patagonia. Thomas Jefferson took a keen interest in mammoth bones.

Besides looking at mammal teeth and digging up penguins, George Gaylord Simpson played a crucial role in bringing together ideas from biology, paleontology, and genetics to help create the "Modern Synthesis" of evolutionary biology; his book Tempo and Mode is a classic in the field.

Prominent names in invertebrate paleontology include Steven Stanley, Stephen Jay Gould, David Raup, Geerat Vermeij, and Jack Sepkoski who have done much to expand our understanding of long-term patterns in the evolution of life on earth. The same is the case with Croatian scientist Dragutin Gorjanovic-Kramberger and his discovery of the "Krapina Man".