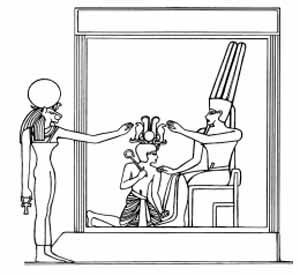 In Egyptian mythology, Pakhet, meaning "She who Tears" (also spelt Pachet, Pehkhet, Phastet, and Pasht) is considered a synthesis of Bast and Sekhmet, ancient deities in the two Egypts who were similar lioness war deities, one for Upper Egypt and the other for Lower Egypt. The range of the two cults met at the border between north and south, near al Minya (now known as Beni Hasan), and here the similarity of the goddesses led to a new form arising in the merged cultures.

She is likely to be a more ancient regional lioness deity, Goddess of the Mouth of the Wadi, related to those which hunted in the wadi, near water at the boundary of the desert. Another title is She Who Opens the Ways of the Stormy Rains, which probably relates to the flash floods in the narrow valley, that occur from storms in the area. By the time Pakhet appeared in the Egyptian pantheon, during the Middle Kingdom, Bast came to be considered less as a fierce lioness, becoming more gentle, as a domesticated cat could be. Consequently, Pakhet's character lay somewhere between the later gentleness of Bast and the ferocity of Sekhmet. Her strength was considered an inner, rather than outer, quality, while retaining all the potential capabilities of the war goddess, if needed. As with Bast and Sekhmet, she also is associated with Hathor and thereby, is a sun deity as well, wearing the solar disk as part of her crown.

It became said that rather than a simple domestic protector against vermin and venomous creatures, or a fierce warrior, she was a huntress, perhaps as a wildcat, who wandered the desert alone at night looking for prey, gaining the title, Night huntress with sharp eye and pointed claw. While this desert aspect led to her being associated with desert storms, as was Sekhmet. She also was said to be a protector of motherhood, as was Bast. In art, she was depicted as a feline-headed woman, or as a feline, often depicted killing snakes with her sharp claws. The exact nature of the feline varied between a desert wildcat, which was more similar to Bast, or a lioness, resembling Sekhmet.

Her most famous temple was an underground, cavernous shrine that was built by Hatshepsut near al Minya, among thirty-nine ancient tombs of Middle Kingdom nomarchs of the Oryx nome, who governed from Hebenu, in an area where many quarries exist. This is in the middle of Egypt, on the east bank of the Nile. A location on the east bank is not traditional for tombs, the west was, but the terrain to the west was most difficult. A more ancient temple to this goddess at the location is known, but has not survived. Hatshepsut is known to have restored temples in this region that had been damaged by the Hyksos invaders.

Its remarkable catacombs have been excavated. Great numbers of mummified cats have been found buried there. Many are thought to have been brought great distances to be buried ceremonially during rituals at the cult center. Some references associate this goddess as, Pakhet-Weret-Hekau, (Weret Hekau meaning "she who has great magic"), implying the association with a goddess such as Hathor or Isis. Another title found is, Horus Pakht, the presence of many mumified hawks at the site would further the association with Hathor who was the mother of Horus, the hawk, the pharaoh, and the sun.

Her hunting nature led to the Greeks, who later occupied Egypt for three hundred years, identifying Pakhet with Artemis. Consequently, this underground temple became known to them as, Speos Artemidos, the Cave of Artemis, a name that persists even though the goddess is not Egyptian. The Greeks attempted to align the Egyptian deities with their own, while retaining the traditions of the Egyptian religion. Next, Egypt was conquered by the Romans, just after 30 AD, and they retained many of the Greek names. Christians and other religious sects occupied some parts of the site during the Roman Empire period. Arab place names were established after the 600s.

Hatshepsut and her daughter Neferure have been identified as the builders of a smaller temple dedicated to Pakhet nearby, which was defaced by subsequent pharaohs. It was completed during the reign of Alexander II and now is called, Speos Batn el-Bakarah.