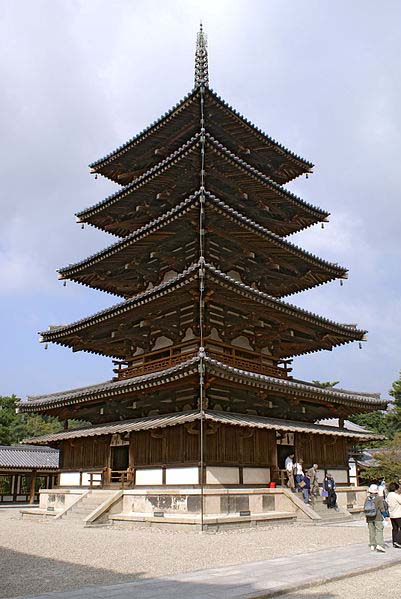 A pagoda is the general term in the English language for a tiered tower with multiple eaves common in Nepal, India, China, Japan, Korea, Vietnam, Burma and other parts of Asia. Some pagodas are used as Taoist houses of worship. Most pagodas were built to have a religious function, most commonly Buddhist, and were often located in or near temples. This term may refer to other religious structures in some countries.

In Vietnam and Cambodia, due to French translation, the English term pagoda is a more generic term referring to a place of worship, although pagoda is not an accurate word to describe a Buddhist temple. The modern pagoda is an evolution of the Ancient Nepal stupa, a tomb-like structure where sacred relics could be kept safe and venerated. The architectural structure of the stupa has spread across Asia, taking on many diverse forms as details specific to different regions are incorporated into the overall design.

The origin of the pagoda can be traced to the stupa (3rd century BC). The stupa, a dome shaped monument, was used as a commemorative monument associated with storing sacred relics. The stupa emerged as a distinctive style of newari architecture and was adopted in Southeast and East Asia, where it became prominent as a Buddhist monument used for enshrining sacred relics.

In East Asia, the architecture of Chinese towers and Chinese pavilions blended into pagoda architecture, eventually also spreading to Southeast Asia. The pagoda's original purpose was to house relics and sacred writings. This purpose was popularized due to the efforts of Buddhist missionaries, pilgrims, rulers, and ordinary devotees to seek out, distribute, and extol Buddhist relics.

Chinese iconography is noticeable in Chinese pagoda as well as other East Asian pagoda architectures. The image of the Shakyamuni Buddha in the abhaya mudra is also noticeable in some Pagodas. Buddhist iconography can be observed throughout the pagoda symbolism. In an article on Buddhist elements in Han art, Wu Hung suggests that in these tombs, Buddhist iconography was so well incorporated into native Chinese traditions that a unique system of symbolism had been developed. Notable Pagodas   Wikipedia