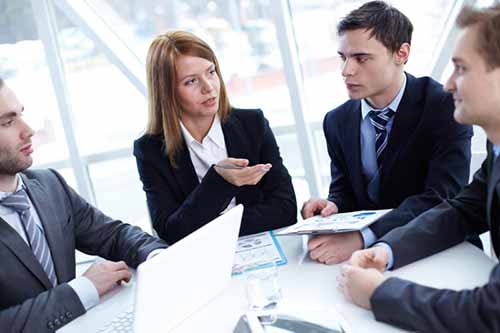 People say and do many things - some without forethought, some with the confidence, and some with over-confidence that they are correct and nothing can shake their beliefs. This is based on their personal experiences and what their minds process as truth. To be confident is one thing, to be overly confident, one best know what they are talking about, especially if guiding the beliefs and decision making of others. This goes to religion, politics, economics, and just about everything else we do.

In business, it is important to be confident in your decision making. When in doubt, do nothing or continue to research. Never be the person who is always right - the one with the answers - the only one who can fix the problems and create new concepts. That much over confidence means you will probably have errors in judgment and don't see situations for what they are. Don't think you're infallible.

In metaphysics, people learn to trust their instincts - mentally dialoging with whom ever they connect with on the other side. That connection could be their "higher self", a spirit guide, or most likely the consciousness grids that dictate what they will do in this reality. Many people call this channeling and look at the long list of predictions channelers have made that never came to pass. Only time provides the truth about the authenticity of what anyone is saying.

In healing, people tend to look for healers who can fix their lives, thus bringing them some sort of peace after years of pain and confusion. All healing is the same and is basically recycled theories with a new twist. Healers are often overly-confident "gurus" who usually don't practice what they preach. There is no difference between the overconfident preacher in any religion and a self-help lecturer/guru.

You will find that as you get older, and more experienced about the way the patterns of reality work, you will become more confident in your conclusion, some to be shared, others kept private.


Confidence is generally described as a state of being certain either that a hypothesis or prediction is correct or that a chosen course of action is the best or most effective. Self-confidence is having confidence in oneself. Arrogance or hubris in this comparison, is having unmerited confidence - believing something or someone is capable or correct when they are not.

Overconfidence or presumptuousness is excessive belief in someone (or something) succeeding, without any regard for failure. Confidence can be a self-fulfilling prophecy as those without it may fail or not try because they lack it and those with it may succeed because they have it rather than because of an innate ability.


People Are Overly Confident in Their Own Knowledge, Despite Errors   Science Daily - June 10, 2013
The findings suggest that people are too confident in what they know and underestimate what they don't know.

Overprecision -- excessive confidence in the accuracy of our beliefs -- can have profound consequences, inflating investors' valuation of their investments, leading physicians to gravitate too quickly to a diagnosis, even making people intolerant of dissenting views. Now, new research confirms that overprecision is a common and robust form of overconfidence driven, at least in part, by excessive certainty in the accuracy of our judgments.

The research, conducted by researchers Albert Mannes of The Wharton School of the University of Pennsylvania and Don Moore of the Haas School of Business at the University of California, Berkeley, revealed that the more confident participants were about their estimates of an uncertain quantity, the less they adjusted their estimates in response to feedback about their accuracy and to the costs of being wrong. The findings suggest that people are too confident in what they know and underestimate what they don't know.

Research investigating overprecision typically involves asking people to come up with a 90% confidence interval around a numerical estimate -- such as the length of the Nile River -- but this doesn't always faithfully reflect the judgments we have to make in everyday life. We know, for example, that arriving 15 minutes late for a business meeting is not the same as arriving 15 minutes early, and that we ought to err on the side of arriving early.

The results showed that participants adjusted their estimates in the direction of the anticipated payoff after receiving feedback about their accuracy, just as Mannes and Moore expected.

But they didn't adjust their estimates as much as they should have given their actual knowledge of local temperatures, suggesting that they were overly confident in their own powers of estimation. Only when the researchers provided exaggerated feedback - in which errors were inflated by 2.5 times -- were the researchers able to counteract participants' tendency towards overprecision.

The new findings, which show that overprecision is a common and robust phenomenon, urge caution: People frequently cut things too close -- arriving late, missing planes, bouncing checks, or falling off one of the many 'cliffs' that present themselves in daily life. These studies tell us that you shouldn't be too certain about what's going to happen, especially when being wrong could be dangerous. You should plan to protect yourself in case you aren't as right as you think you are.