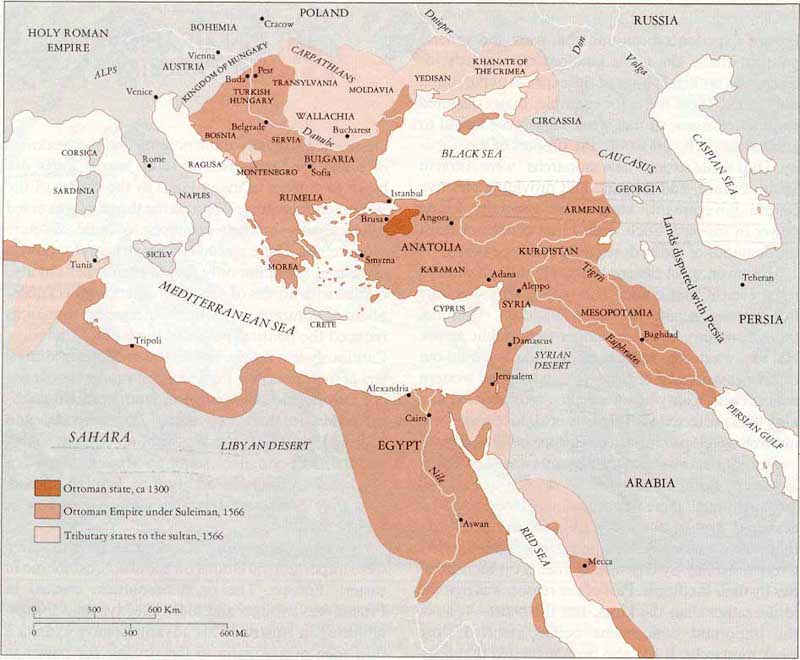 The Ottomans are one of the greatest and most powerful civilizations of the modern period. Their moment of glory in the sixteenth century represents one of the heights of human creativity, optimism, and artistry. The empire they built was the largest and most influential of the Muslim empires of the modern period, and their culture and military expansion crossed over into Europe. Not since the expansion of Islam into Spain in the eighth century had Islam seemed poised to establish a European presence as it did in the sixteenth and seventeenth centuries. Like that earlier expansion, the Ottomans established an empire over European territory and established Islamic traditions and culture that last to the current day (the Muslims in Bosnia are the last descendants of the Ottoman presence in Europe).

The Ottoman empire lasted until the twentieth century. While historians like to talk about empires in terms of growth and decline, the Ottomans were a force to be reckoned with, militarily and culturally, right up until the break-up of the empire in the first decades of this century. The real end to the Ottoman culture came with the secularization of Turkey after World War II along European models of government. The transition to a secular state was not an easy one and its repercussions are still being felt in Turkish society today, nevertheless, secularization represents the real break with the Ottoman tradition and heritage.

The Ottoman Empire was a vast state founded in the late 13th century by Turkish tribes in Anatolia and ruled by the descendants of Osman I until its dissolution in 1918. Modern Turkey formed only part of the empire, but the terms ŇTurkeyÓ and ŇOttoman EmpireÓ were often used interchangeably.


Organization of the Empire

Economically, socially, and militarily, Turkey was a medieval state, unaffected by the developments in the rest of Europe. Turkish domination over the northern part of Africa (except Tripoli and Egypt) was never well defined or effective, and the eastern border was inconstant, shifting according to frequent wars with Persia. Of the vassal princes, only the khans of Crimea were generally loyal.

The sultans themselves had sunk into indolence and depravity. Until the ascension (1603) of Ahmad I, the succession to the throne was habitually contested by all the sons of the deceased sultan, and it was the patriotic duty of the victor to kill his rivals in order to restore order. Although this practice was barbarous, when it ceased other problems arose. The eldest male member of the family was recognized as the heir-designate, but to prevent threats to the sultan the imperial prince was denied any involvement in public affairs and was kept in luxurious imprisonment. When the prince finally ascended the throne, he was often alcoholic or lunatic.

Actual rule was usually exercised by the grand viziers, many of whom were able men (notably those of the Koprulu family). The sultans themselves often were the creatures of the Janissaries , whose favor was purchased by large gifts at the ascension of a sultan.

One of the most nefarious aspects of the court of Constantinople (known as the Seraglio and the Sublime Porte) was the all-pervading corruption and bribery that had been raised to a system of administration. The pashas and hospodars (governors) who administered the provinces and vassal states purchased their posts at exorbitant prices. They recovered their fortunes by extorting still larger sums from their subjects. The peasantry was thus reduced to abject misery.

A positive feature in Ottoman administration was the religious toleration generally extended to all non-Muslims. This, however, did not prevent occasional massacres and discriminatory fiscal practices. In Constantinople the Greeks and Armenians held a privileged status and were very influential in commerce and politics. The despotic system of government was mitigated only by the observance of Muslim law.

The Ottoman state began as one of many small Turkish states that emerged in Asia Minor during the breakdown of the empire of the Seljuk Turks. The Ottoman Turks began to absorb the other states, and during the reign (1451-81) of Muhammad II they ended all other local Turkish dynasties. The early phase of Ottoman expansion took place under Osman I, Orkhan Murad I, and Beyazid I at the expense of the Byzantine Empire, Bulgaria, and Serbia. Bursa fell in 1326 and Adrianople (the modern Edirne ) in 1361; each in turn became the capital of the empire. The great Ottoman victories of Kosovo (1389) and Nikopol (1396) placed large parts of the Balkan Peninsula under Ottoman rule and awakened Europe to the Ottoman danger. The Ottoman siege of Constantinople was lifted at the appearance of Timur , who defeated and captured Beyazid in 1402. The Ottomans, however, soon rallied.


The Period of Great Expansion

The empire, reunited by Muhammad I , expanded victoriously under Muhammad's successors Murad II and Muhammad II . The victory (1444) at Varna over a crusading army led by Ladislaus III of Poland was followed in 1453 by the capture of Constantinople . Within a century the Ottomans had changed from a nomadic horde to the heirs of the most ancient surviving empire of Europe. Their success was due partly to the weakness and disunity of their adversaries, partly to their excellent and far superior military organization. Their army comprised numerous Christiansnot only conscripts, who were organized as the corps of Janissaries , but also volunteers. Turkish expansion reached its peak in the 16th cent. under Selim I and Suleiman the Magnificent.

The Hungarian defeat (1526) at Mohacs prepared the way for the capture (1541) of Buda and the absorption of the major part of Hungary by the Ottoman Empire; Transylvania became a tributary principality, as did Walachia and Moldavia . The Asian borders of the empire were pushed deep into Persia and Arabia. Selim I defeated the Mamluks of Egypt and Syria , took Cairo in 1517, and assumed the succession to the caliphate . Algiers was taken in 1518, and Mediterranean commerce was threatened by corsairs, such as Barbarossa , who sailed under Turkish auspices. Most of the Venetian and other Latin possessions in Greece also fell to the sultans.

During the reign of Suleiman I began (1535) the traditional friendship between France and Turkey, directed against Hapsburg Austria and Spain. Suleiman reorganized the Turkish judicial system, and his reign saw the flowering of Turkish literature, art, and architecture. In practice the prerogatives of the sultan were limited by the spirit of Muslim canonical law ( sharia ), and he usually shared his authority with the chief preserver ( sheyhulislam ) of the sharia and with the grand vizier (chief executive officer).

In the progressive decay that followed Suleiman's death, the clergy ( ulema ) and the Janissaries gained power and exercised a profound, corrupting influence. The first serious blow by Europe to the empire was the naval defeat of Lepanto (1571; see Lepanto, battle of ), inflicted on the fleet of Selim II by the Spanish and Venetians under John of Austria. However, Murad IV in the 17th cent. temporarily restored Turkish military prestige by his victory (1638) over Persia. Crete was conquered from Venice, and in 1683 a huge Turkish army under Grand Vizier Kara Mustafa surrounded Vienna. The relief of Vienna by John III of Poland and the subsequent campaigns of Charles V of Lorraine, Louis of Baden , and Eugene of Savoy ended in negotiations in 1699 (see Karlowitz, Treaty of ), which cost Turkey Hungary and other territories.

The breakup of the state gained impetus with the Russo-Turkish Wars in the 18th cent. Egypt was only temporarily lost to Napoleon's army, but the Greek War of Independence and its sequels, the Russo-Turkish War of 1828-29 (see Adrianople, Treaty of ), and the war with Muhammad Ali of Egypt resulted in the loss of Greece and Egypt, the protectorate of Russia over Moldavia and Walachia, and the semi-independence of Serbia. Drastic reforms were introduced in the late 18th and early 19th cent. by Selim III and Mahmud II , but they came too late. By the 19th cent. Turkey was known as the Sick Man of Europe.

Through a series of treaties of capitulation from the 16th to the 18th cent. the Ottoman Empire gradually lost its economic independence. Although Turkey was theoretically among the victors in the Crimean War , it emerged from the war economically exhausted. The Congress of Paris (1856) recognized the independence and integrity of the Ottoman Empire, but this event marked the confirmation of the empire's dependency rather than of its rights as a European power.

The rebellion (1875) of Bosnia and Hercegovina precipitated the Russo-Turkish War of 1877-78, in which Turkey was defeated despite its surprisingly vigorous stand. Romania (i.e., Walachia and Moldavia), Serbia, and Montenegro were declared fully independent, and Bosnia and Hercegovina passed under Austrian administration. Bulgaria, made a virtually independent principality, annexed (1885) Eastern Rumelia with impunity.

Sultan Abd al-Majid , who in 1839 issued a decree containing an important body of civil reforms, was followed (1861) by Abd al-Aziz , whose reign witnessed the rise of the liberal party. Its leader, Midhat Pasha , succeeded in deposing (1876) Abd al-Aziz. Abd al-Hamid II acceded (1876) after the brief reign of Murad V. A liberal constitution was framed by Midhat, and the first Turkish parliament opened in 1877, but the sultan soon dismissed it and began a rule of personal despotism. The Armenian massacres (see Armenia ) of the late 19th cent. turned world public opinion against Turkey. Abd al-Hamid was victorious in the Greco-Turkish war of 1897, but Crete, which had been the issue, was ultimately gained by Greece.

In 1908 the Young Turk movement, a reformist and strongly nationalist group, with many adherents in the army, forced the restoration of the constitution of 1876, and in 1909 the parliament deposed the sultan and put Muhammad V on the throne. In the two successive Balkan Wars (1912-13), Turkey lost nearly its entire territory in Europe to Bulgaria, Serbia, Greece, and newly independent Albania. The nationalism of the Young Turks, whose leader Enver Pasha gained virtual dictatorial power by a coup in 1913, antagonized the remaining minorities in the empire.

The outbreak of World War I found Turkey lined up with the Central Powers. Although Turkish troops succeeded against the Allies in the Gallipoli campaign (1915), Arabia rose against Turkish rule, and British forces occupied (1917) Baghdad and Jerusalem. In 1918, Turkish resistance collapsed in Asia and Europe. An armistice was concluded in October, and the Ottoman Empire came to an end. The Treaty of Sevres confirmed its dissolution. With the victory of the Turkish nationalists, who had refused to accept the peace terms and overthrew the sultan in 1922, modern Turkey's history began. 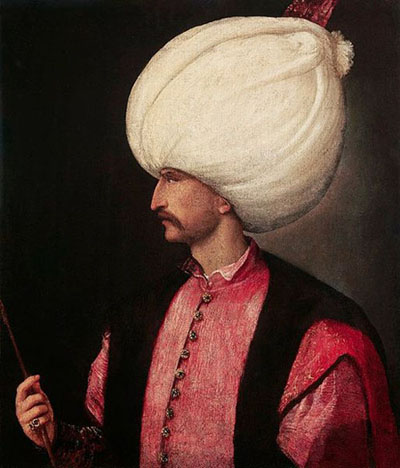