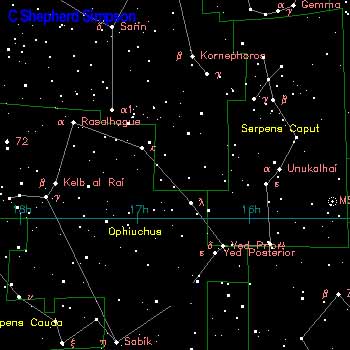 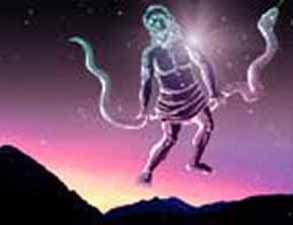 There are several mythological possibilities for whom the figure represents. The most recent interpretation is that the figure represents the legendary physician Asclepius, who learned the secrets of life and death from one serpent bringing another some herbs which healed it (Asclepius had previously tried to kill it). In order to avoid the human race becoming immortal under Asclepius's care, Zeus eventually killed him with a bolt of lightning, but placed him in the heavens to honour his good works. The involvement in the myth of Chiron may be connected to the nearby presence of the constellation Sagittarius, which was in later times occasionally considered to represent Chiron (who was more usually identified as the constellation Centaurus). Another possibility is that the figure represents the demise during the Trojan War of the Trojan priest Laocošn, who was strangled by a snake or a sea serpent after warning the Trojans against accepting the Trojan Horse. A suggestive statue in the Vatican Museums depicts the tragedy. A third possibility is Apollo wrestling with the Python to take control of the oracle at Delphi.

Johannes Kepler's drawing depicting the location of the stella nova in the foot of Ophiuchus. This constellation, known from antiquity, is one of the 48 constellations described by Ptolemy. It has also been known as Serpentarius, a Latin form of its name. The most important historical event in Ophiuchus was the Supernova 1604, also named Kepler's Supernova, whose explosion was first observerd on October 9, 1604, near Ophiuchi. Johannes Kepler saw it first on October 16, but studied it so extensively that the supernova was subsequently named after him. He published his findings in a book entitled De stella nova in pede Serpentarii (On the New Star in Ophiuchus' Foot). Galileo used its brief appearance to counter the Aristotelian dogma that the heavens are changeless. It occurred only 32 years after another supernova in Cassiopeia that had been observed by Tycho Brahe; the last supernova before then had occurred in 1054, and after Kepler's no further supernovae were observed until 1987.

In the 2nd century, Ptolemy listed 29 stars in Ophiuchus. He recognized that most of those stars were north of the ecliptic (the path of the Sun through the sky) - however, 4 of them (today known as 36 Oph, 42