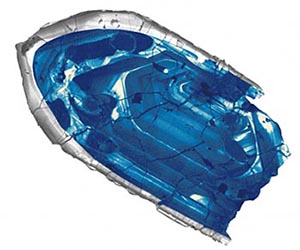 A 4.4 billion-year-old zircon crystal is providing new insight into how the early Earth cooled from a ball of magma and formed continents just 160 million years after the formation of our solar system, much earlier than previously believed. The zircon, pictured here, is from the Jack Hills region of Australia and is now confirmed to be the oldest bit of the Earth's crust. The new study confirms that zircon crystals from Western Australia's Jack Hills region crystallized 4.4 billion years ago, building on earlier studies that used lead isotopes to date the Australian zircons and identify them as the oldest bits of the Earth's crust. The microscopic zircon crystal used by Valley and his group in the current study is now confirmed to be the oldest known material of any kind formed on Earth.


A tiny 4.4-billion-year-old crystal has been confirmed as the oldest fragment of Earth's crust. The zircon was found in sandstone in the Jack Hills region of Western Australia. Scientists dated the crystal by studying its uranium and lead atoms. The former decays into the latter very slowly over time and can be used like a clock. 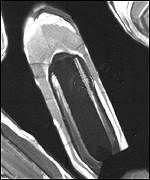 Scientists have found a crystal believed to be at least 4.3 billion years old, making it the oldest known solid on Earth. And they say the crystal's sparkling facets contain hints that oceans, continents and perhaps even life itself developed much earlier than previously thought. The grain of zircon, hardly wider than a human hair, was born in a molten fury not long after Earth formed. It was discovered inside younger stone in what is now Australia. "It represents a significant advance in reconstructing Earth's Dark Ages," said geologist Alex N. Halliday of the Swiss Federal Institute of Technology in Zurich. He was not involved in the research.

Zircon is a durable crystal made of silicon, oxygen and zirconium, among other elements. The oldest grain identified is one of a dozen very old crystals extracted from the Jack Hills section of northwestern Australia.

Two studies of the grains were conducted independently by international research teams. Their results were published in Thursday's issue of the journal Nature. One study reports that the oldest zircon is at least 4.3 billion years old. The second study puts its age at up to 4.4 billion years old. "We are pretty confident," said T. Mark Harrison, a UCLA geochemist and co-author of one of the studies. "Two studies conducted independently apparently have come to the same conclusion."

Both research teams dated the zircon grains by analyzing their isotopes of uranium. Uranium decays into lead. By calculating the ratio of uranium to lead, they determined that a dozen of the grains were very old indeed. Both teams used a high-resolution ion microprobe and a mass spectrometer to analyze the crystals.

Earth is believed to have formed into a terrestrial planet 4.56 billion years ago when swirling space debris and gas clumped together. The researchers said the zircon crystals grew from molten granite that formed at high temperatures more than 10 miles below the Earth's surface.

The oldest crystal's geochemical properties offer a glimpse into Earth's early conditions. Researchers said the zircon's high level of heavy oxygen isotopes suggest it was cooled by surface water after it formed. If correct, this means that oceans appeared 200 million to 300 million years after Earth's formation. In this water, they speculate, simple life might have spawned. Current research holds that life appeared on Earth 3.9 billion years ago. "Our results raise the possibility that a biosphere could have arisen on Earth 400 million years earlier than is now thought,"Harrison said. "But it's not a smoking gun."

The oldest known intact rocks on Earth, located in northwestern Canada, are 3.96 billion years old. "The stage was set 4.3 billion years ago for life to emerge on Earth," said University of Colorado astrobiologist Steven J. Mojzsis, Harrison's colleague on the study. "There was probably already in place an atmosphere, an ocean, and a stable crust within about 200 million years of the Earth's formation."