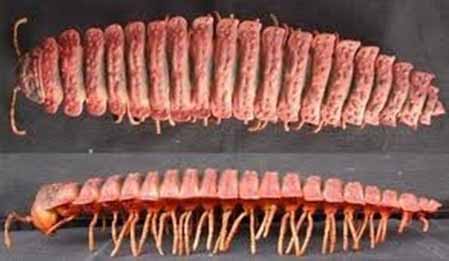 Stonehaven is a town in Aberdeenshire, Scotland. It lies on Scotland's northeast coast and had a population of 9,577 in 2001 census. As the old county town of Kincardineshire, Stonehaven grew around an Iron Age fishing village, now the "Auld Toon" ("old town"), and expanded inland from the seaside. As late as the 16th century, old maps indicate the town was called Stonehyve, Stonehive, Pont also adding the alternative Duniness. It is known informally to locals as Stoney. The town is served by Stonehaven railway station, and lies just to the east of the A90 road. A fossil of the oldest known land animal, Pneumodesmus newmani, a species of millipede, was found at Stonehaven's Cowie Beach in 2004.

Scientists have decided that a fossil found near Stonehaven is the remains of the oldest creature known to have lived on land. It is thought that the one-centimetre millipede which was prized out of a siltstone bed is 428 million years old. Experts at the National Museums of Scotland and Yale University, US, have studied the fossil for months. They say the specimen is the earliest evidence of a creature living on dry land, rather than in the sea. The discovery on the foreshore of Cowie Harbour was made by an amateur fossil hunter, Mike Newman.