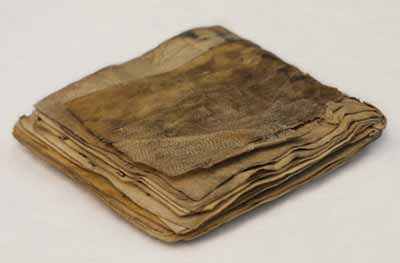 What some scholars believe could be the world's oldest known Jewish prayer book is now part of a private collection founded by an evangelical businessman. The identification of the very rare prayer book, dated to the ninth century, was announced Sept. 26 by Steve Green, president of the arts and crafts retailer Hobby Lobby. Green facilitates his family's array of biblical texts and artifacts, the Green Collection. The text was purchased from a collector.

Measuring about 11-by-10 centimeters, the 50-page, tan-colored book is written in an archaic form of Hebrew with Babylonian vowel markings, according to the Religion News Service. The fact that that book appears to still have its original binding makes it very special, according to Dr. Jerry Pattengale, director of the Green Collection's research arm, the Green Scholars Initiative. "It is certainly the earliest copy of such a book that has been known," Pattengale told The Huffington Post.

Predating the earliest known copies of the Torah by several hundred years, the prayer book -- also known as a siddur -- could prove to be an important link to religious scholarship of the era. This artifact may very well be the earliest connection today's practicing Jews have to the roots of their rabbinic liturgy. Jewish tradition dictates that holy texts be buried or hidden when they wear outwhich has led to very few surviving before the 15th century.

The book's codex appears to have been created first, followed by the inside text, Pattengale noted. The inside of the book is broken into six unique sections relating to topics as diverse of the End Times and the Passover Seder. The first of the sections include a set of 100 benedictions, or blessings, that could have been recited by observant Jews of the day. This was a liturgical set of prayers, hymns and poems used for various occasions. The prayer book is really what most of the Jewish community would be in touch with on a daily basis, [creating] a connection between the Bible and their daily worship.

Researchers from the Green Scholars Initiative used carbon-14 dating to ascertain the book's exact age. The text's origins are more mysterious, however. While the markings imply the text is from the Babylonian region. It may take another year for Green Institute researchers to confirm from which region it came. The prayer book, along with other artifacts from the Green Collection, are scheduled to be part of an inaugural display at a yet-to-be named biblical museum, slated to open in March 2017 in Washington, D.C. 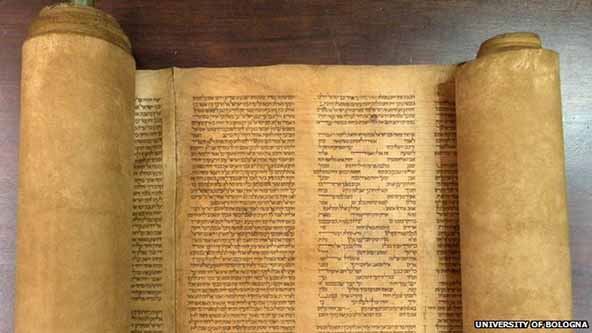 
The University of Bologna in Italy has found what it says may be the oldest complete scroll of Judaism's most important text, the Torah. The scroll was in the university library but had been mislabeled, a professor at the university says. It was previously thought the scroll was no more that a few hundred years old. However, after carbon dating tests, the university has said the text may have been written more than 850 years ago.

The university's Professor of Hebrew Mauro Perani says this would make it the oldest complete text of the Torah known to exist, and an object of extraordinary worth. The university says that in 1889 one of its librarians, Leonello Modona, had examined the scroll and dated it to the 17th Century.

However, when Mr Perani recently re-examined the scroll, he realized the script used was that of the oriental Babylonian tradition, meaning that the scroll must be extremely old. Another reason for the dating is that the text has many features forbidden in later copies under rules laid down by the scholar Maimonides in the 12th Century, the university says.