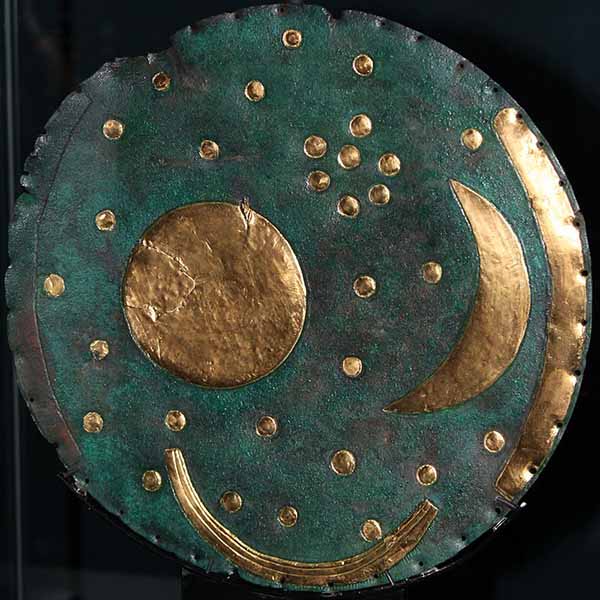 It reminds me an emoji with a smile and a wink!


The Nebra sky disk is a bronze disk about 30 centimeters (11 3/4 inch) in diameter and weighing 2.2 kilograms (4.9 lb), having a blue-green patina and inlaid with gold symbols. These symbols are interpreted generally as the Sun or full moon, a lunar crescent, and stars (including a cluster of seven interpreted as the Pleiades). Two golden arcs along the sides, interpreted to mark the angle between the solstices, were added later. A final addition was another arc at the bottom surrounded with multiple strokes (of uncertain meaning, variously interpreted as a Solar Barge with numerous oars, the Milky Way, or a rainbow).

The disk is attributed to a site in present-day Germany near Nebra, Saxony-Anhalt, and dated by Archaeological association to c. 1600 BC. Researchers suggest the disk is an artifact of the Bronze Age Unetice culture.

The style in which the disk is executed was unlike any artistic style then known from the period, with the result that the object was initially suspected of being a forgery, but is now widely accepted as authentic.

The Nebra sky disk features the oldest concrete depiction of the cosmos yet known from anywhere in the world. In June 2013 it was included in the UNESCO Memory of the World Register and termed "one of the most important archaeological finds of the twentieth century."

The precise dating of the Nebra sky disk depended upon the dating of a number of Bronze Age weapons, which were offered for sale with the disk and said to be from the same site. These axes and swords can be dated typologically to the mid 2nd millennium BC. Radiocarbon dating of a birchbark particle found on one of the swords to between 1600 and 1560 BC confirmed this estimate. This corresponds to the date of burial, at which time the disk had likely been in existence for several generations.

The disk, two bronze swords, two hatchets, a chisel, and fragments of spiral bracelets were discovered in 1999 by Henry Westphal and Mario Renner while they were treasure-hunting with a metal detector. Archaeological artifacts are the property of the state in Saxony-Anhalt; the hunters were operating without a license, and knew their activity constituted looting and was illegal. They damaged the disk with their spade and destroyed parts of the site.

The next day, Westphal and Renner sold the entire hoard for 31,000 DM to a dealer in Cologne. The hoard changed hands within Germany over the next two years, being sold for up to a million DM. By 2001 knowledge of its existence had become public. In February 2002 the state archaeologist Harald Meller acquired the disk in a police-led sting operation in Basel from a couple who had put it on the black market for 700,000 DM.

The original finders were eventually traced. In a plea bargain, they led police and archaeologists to the discovery site. Archaeologists opened a dig at the site and uncovered evidence that supports the looters' claims. There are traces of bronze artifacts in the ground, and the soil at the site matches soil samples found clinging to the artifacts. The disk and its accompanying finds are now held at the State Museum of Prehistory in Halle.

The discovery site is a prehistoric enclosure encircling the top of a 252 metres (827 ft) elevation in the Ziegelroda Forest, known as Mittelberg ("central hill"), some 60 km west of Leipzig. The surrounding area is known to have been settled in the Neolithic era, and Ziegelroda Forest contains approximately 1,000 barrows.

The enclosure is oriented in such a way that the sun seems to set every solstice behind the Brocken, the highest peak of the Harz mountains, some 80 km to the north-west. The treasure-hunters claimed the artifacts were discovered within a pit inside the bank-and-ditch enclosure.

According to an initial analysis of trace elements by x-ray fluorescence by E. Pernicka, then at the University of Freiberg, the copper originated at Bischofshofen in Austria, while the gold was thought to be from the Carpathian Mountains. A more recent analysis found that the gold used in the first phase was from the River Carnon in Cornwall, United Kingdom. The tin present in the bronze was also of Cornish origin.


Study casts doubt on Nebra sky disk thought to be oldest representation of the heavens   Live Science - September 15, 2020
One of Germany's most famous ancient artifacts may not be what it seems, if a new study is to be believed. Fierce debate over the Nebra Sky Disk has been reignited by a new study that suggests it is at least 1,000 years younger than previously thought, and probably doesn't have any of the elaborate meanings proposed for it. The 12-inch-wide (30 centimeters) bronze disk inlaid with gold circles, arcs and crescents was reportedly unearthed in 1999 near the town of Nebra, in Germany's Saxony-Anhalt state. It was widely hailed as one of the most stunning ancient artifacts ever found. But controversy has surrounded it since its discovery.