Mummies from the Arctic Circle 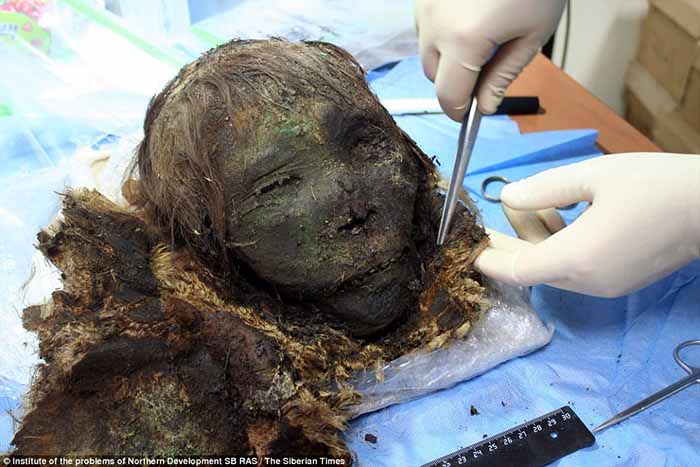 Incredible mummy of a 'polar princess' is found close to the Arctic Circle after 900 years - with her hair and long eyelashes still intact Đ after she was unwrapped from a cocoon of copper and fur   Daily Mail - August 4, 2017


The miraculous mummy of a 'polar princess' has been found close to the Arctic Circle, her long eyelashes and hair still intact after 900 years. Her haunting face and features are clearly seen after she was unwrapped by scientists from the cocoon of copper and fur in which she was buried in permafrost soil in the 12th century. Aged around 35, she was the only woman buried around almost three dozen men, and the detail on her accidentally mummified remains is astonishing.

Her impressive eyelashes and teeth are immaculately preserved as is her full head of hair. The green tinge on her face is from the fragments of a copper kettle apparently intended to protect her as she journeyed to the afterlife. The pieces of copper kettle had the unintended consequence of mummifying her, archaeologists believe. The mummy was dug up by archaeologists in the Zeleny Yar burial site near Salekhard, Russia, reported The Siberian Times.

She was a member of a mysterious medieval hunting and fishing civilization that held sway in this polar region, but had connections to Persia. Archaeologists are puzzled why she is the only adult female found in the necropolis, and had earlier thought this was an all male burial ground. It could mean she was an elite member of her society which lived in this cold region, although apart from several temple rings close to her skull, there was no evidence of jewelry in her tomb. While her head is well preserved, the rest of her body was not. A small baby found in a grave nearby - also probably female - is not believed to be related to this middle ages mummy.

Archaeologist Alexander Gusev, from Russia's Arctic Research Centre, said: 'We clearly see from the face that she was a woman. 'This radically changes our concept about this graveyard. 'Previously we thought that there were only adult men and children, but now we have a woman. It's amazing', he said.

'The woman and the baby are from different graves, so we cannot say they are related', said Dr Sergey Slepchenko, of the Institute of the Problems of Northern Development, Tyumen. Detailed analysis will be carried out on the remains by Russian and South Korean scientists in an attempt to understand more about the lives of early polar settlers. He hopes to reconstruct the face of the woman.