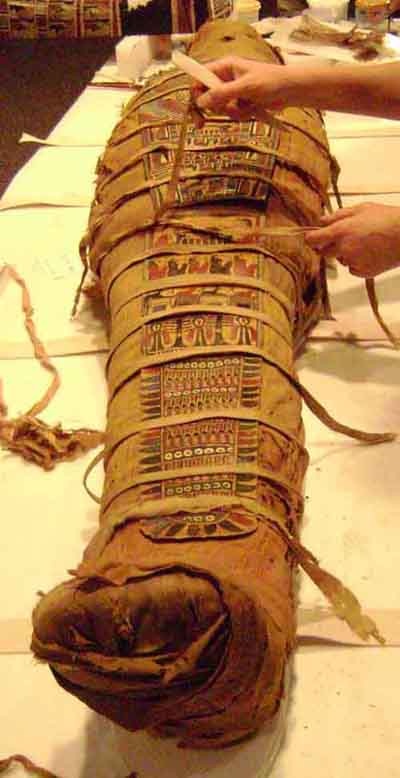 A mummy is a deceased human or animal whose skin and organs have been preserved by either intentional or accidental exposure to chemicals, extreme cold, very low humidity, or lack of air, so that the recovered body will not decay further if kept in cool and dry conditions. Some authorities restrict the use of the term to bodies deliberately embalmed with chemicals, but the use of the word to cover accidentally desiccated bodies goes back to at least 1615 AD.

Mummies of humans and other animals have been found on every continent, both as a result of natural preservation through unusual conditions, and as cultural artifacts. Over one million animal mummies have been found in Egypt, many of which are cats.

In addition to the well-known mummies of Ancient Egypt, deliberate mummification was a feature of several ancient cultures in areas of South America and Asia which have very dry climates. The oldest known deliberate mummy is a child, one of the Chinchorro mummies found in the Camarones Valley, Chile, which dates around 5050 BCE.

The oldest known naturally mummified human corpse is a severed head dated as 6,000 years old, found in 1936 CE at the site named Inca Cueva No. 4 in South America.

Mummies are typically divided into one of two distinct categories: anthropogenic or spontaneous. Anthropogenic mummies were deliberately created by the living for any number of reasons, the most common being for religious purposes. Spontaneous mummies, such as Otzi, were created unintentionally due to natural conditions such as extremely dry heat or cold, or anaerobic conditions such as those found in bogs. While most individual mummies exclusively belong to one category or the other, there are examples of both types being connected to a single culture, such as those from the Ancient Egyptian culture.

While interest in the study of mummies dates as far back as Ptolemaic Greece, most structured scientific study began at the beginning of the 20th Century. The first modern scientific examinations of mummies began in 1901, conducted by professors at the English-language Government School of Medicine in Cairo, Egypt. The first X-ray of a mummy came in 1903 when professors Grafton Elliot Smith and Howard Carter used the only X-ray machine in Cairo, at the time, to examine the mummified body of Tuthmosis IV. British chemist Alfred Lucas applied chemical analyses to Egyptian mummies during this same period, which returned many results about the types of substances used in embalming. Lucas also made significant contributions to the analysis of Tutankhamun in 1922.

In more recent years, CT scanning has become an invaluable tool in the study of mummification by allowing researchers to digitally "unwrap" mummies without risking damage to the body. The level of detail in such scans is so intricate that small linens used in tiny areas such as the nostrils can be digitally reconstructed in 3-D.[16] Such modelling has been utilized to perform digital autopsies on mummies to determine cause of death and lifestyle, such as in the case of Tutankhamun.

The Siberian Buryat lama Dashi-Dorzho Itigilov (1852-1927) aroused considerable interest , as his body was retrieved in a perfect state of mummification in 2002. Monks whose bodies remain incorrupt without any traces of deliberate mummification are venerated by some Buddhists who believe they successfully were able to mortify their flesh to death. "Buddhists say that only the most advanced masters can fall into some particular condition before death and purify themselves so that his dead body could not decay."

Many Mahayana Buddhist monks were reported to knew the time of death and left their last testaments and their students accordingly buried them sitting in lotus posture, put into a vessel with full of such as coal, wood, paper or lime and surrounded by bricks, and be exhumed after usually 3 years. The preserved bodies would be painted with paints and sticked with gold. Many were destroyed in China during the Cultural Revolution, some preserved, and some recent ones were reported.

Victor H. Mair claims that hundreds of mummified bodies of Tibetan monks were destroyed in China during the Cultural Revolution or were cremated by the Lamaists in order to prevent their desecration. Also according to Mair, the self-mummification of a Tibetan monk, who died ca. 1475 and whose body was retrieved relatively incorrupt in the 1990s, was achieved by the sophisticated practices of meditation, coupled with prolonged starvation and slow self-suffocation using a special belt that connected the neck with his knees in a lotus position.

Bodies purported to be those of self-mummified monks are exhibited in several Japanese shrines, and it has been claimed that the monks, prior to their death, stuck to a sparse diet made up of salt, nuts, seeds, roots, pine bark, and urushi tea. Some of them were buried alive in a pine-wood box full of salt.

In the 1830s, Jeremy Bentham, the founder of utilitarianism, left instructions to be followed upon his death which led to the creation of a sort of modern-day mummy. He asked that his body be displayed to illustrate how the "horror at dissection originates in ignorance"; once so displayed and lectured about, he asked that his body parts be preserved, including his skeleton (minus his skull, for which he had other plans), which were to be dressed in the clothes he usually wore and "seated in a Chair usually occupied by me when living in the attitude in which I am sitting when engaged in thought." His body, outfitted with a wax head created because of problems preparing it as Bentham requested, is on open display in the University College London.

During the early 20th century the Russian movement of Cosmism, as represented by Nikolaj Fedorov, envisioned scientific resurrection of dead people. The idea was so popular that, after Lenin's death, Leonid Krasin and Alexander Bogdanov suggested to cryonically preserve his body and brain in order to revive him in the future. Necessary equipment was purchased abroad, but for a variety of reasons the plan was not realized. Instead his body was embalmed and placed on permanent exhibition in the Lenin Mausoleum in Moscow, where it is displayed to this day. The mausoleum itself was modeled by Aleksey Shchusev on the Pyramid of Djoser and the Tomb of Cyrus.

In the state of Guanajuato, Mexico, mummies were discovered in a cemetery of a city named Guanajuato northwest of Mexico City (near Leon). They are accidental modern mummies and were literally "dug up" between the years 1896 and 1958 when a local law required relatives of the deceased to pay a kind of grave tax. The Guanajuato mummies are on display in the Museo de las momias, high on a hill overlooking the city. Another notable example of natural mummification in modern times is Christian Friedrich von Kahlbutz (1651-1702), whose body is on exhibit in his native Kampehl.

In 1994 265 mummified bodies were found in the crypt of a Dominican church in Vac, Hungary from the 1729-1838 period. The discovery proved to be scientifically important, and by 2006 an exhibition was established in the Museum of Natural History in Budapest.

In March 2006, the body of the Greek Orthodox Monk Vissarion Korkoliacos was found intact in his tomb, after fifteen years in grave. The event has led to a dispute between those who believe the preservation to be a miracle and those who claimed the possibility of natural mummification. 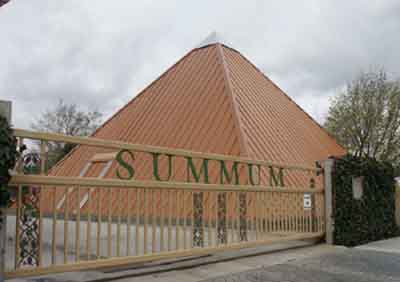 In 1975, an esoteric organization by the name of Summum introduced "Modern Mummification", a form of mummification that Summum claims uses modern techniques along with aspects of ancient methods. The service is available for spiritual reasons. Summum considers animals and people to have an essence that continues following the death of the body, and their mummification process is meant to preserve the body as a means to aid the essence as it transitions to a new destination. Summum calls this "transference," and the concept seems to correlate with ancient Egyptian reasons for mummification.

Rather than using a dehydration process that is typical of ancient mummies, Summum uses a chemical process that is supposed to maintain the body's natural look. The process includes leaving the body submerged in a tank of preservation fluid for several months. Summum claims its process preserves the body so well that the DNA will remain intact far into the future, leaving open the possibility for cloning should science perfect the technique on humans.

According to news stories, Summum has mummified numerous pets such as birds, cats, and dogs. People were mummified early on when Summum developed its process and many have made personal, "pre-need" arrangements. Summum has been included in television programs by National Geographic and the British Broadcasting Corporation, and is also discussed in the book The Scientific Study of Mummies by Arthur C. Aufderheide.

The first person to formally undergo Summum's process of modern mummification was its founder who went by the name, Summum Bonum Amen Ra. He died in January 2008. Summum is currently considered to be the only "commercial mummification business" in the world. 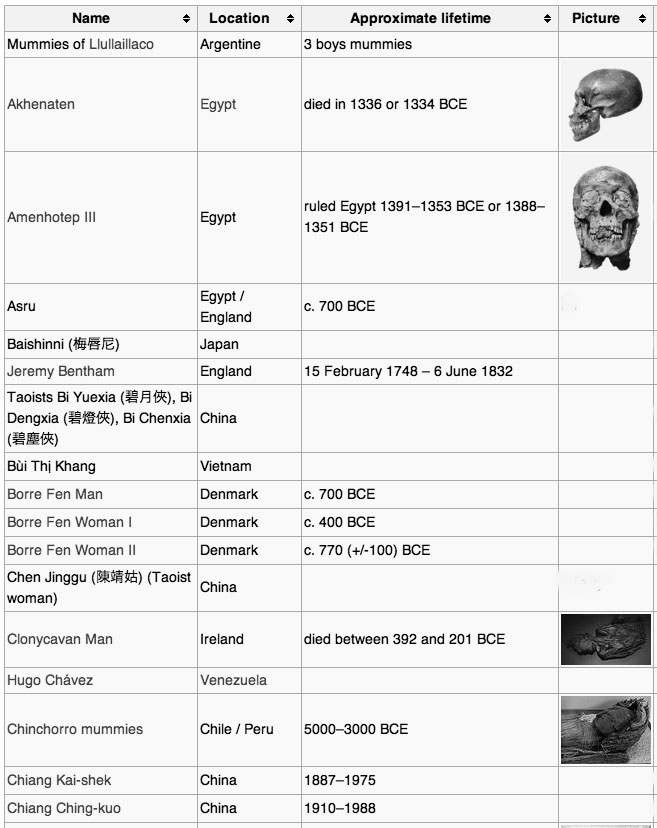 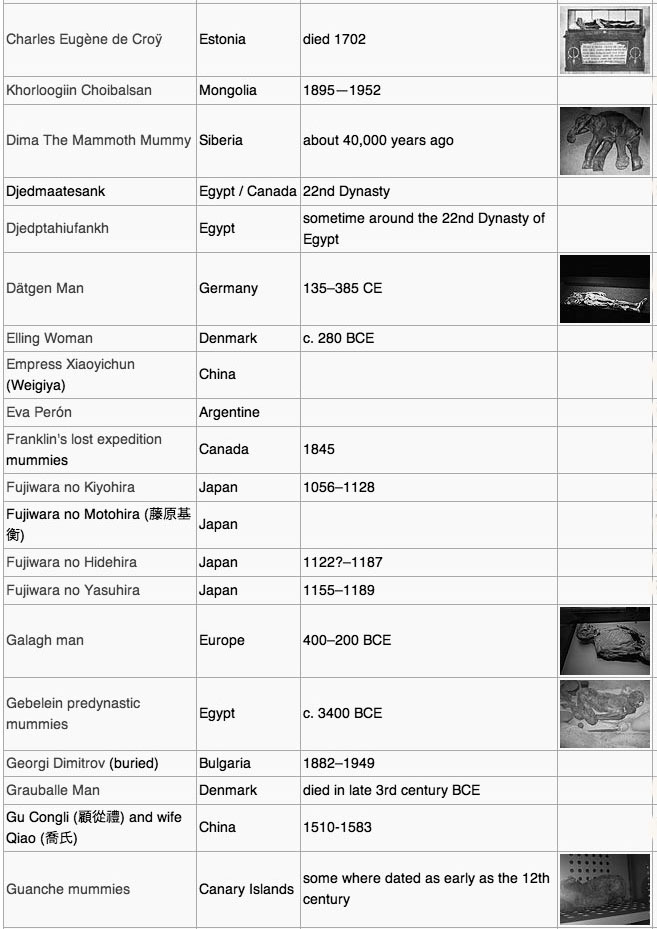 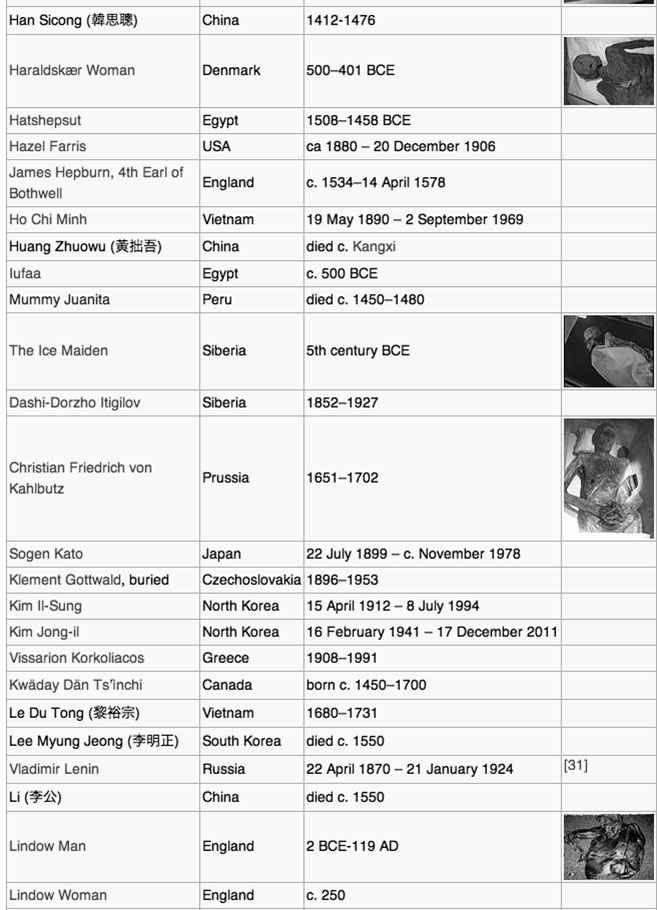 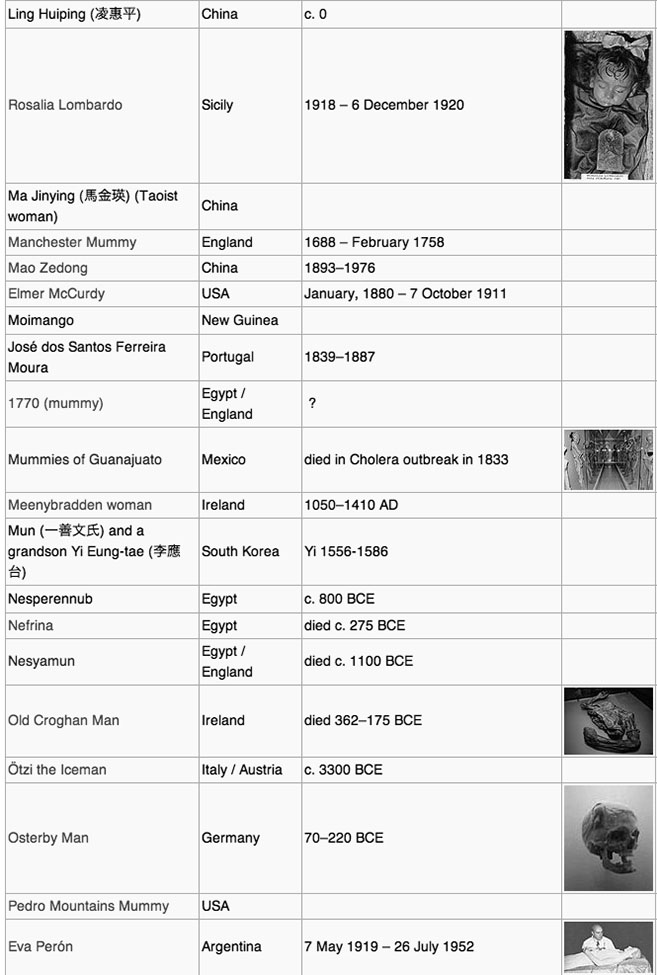 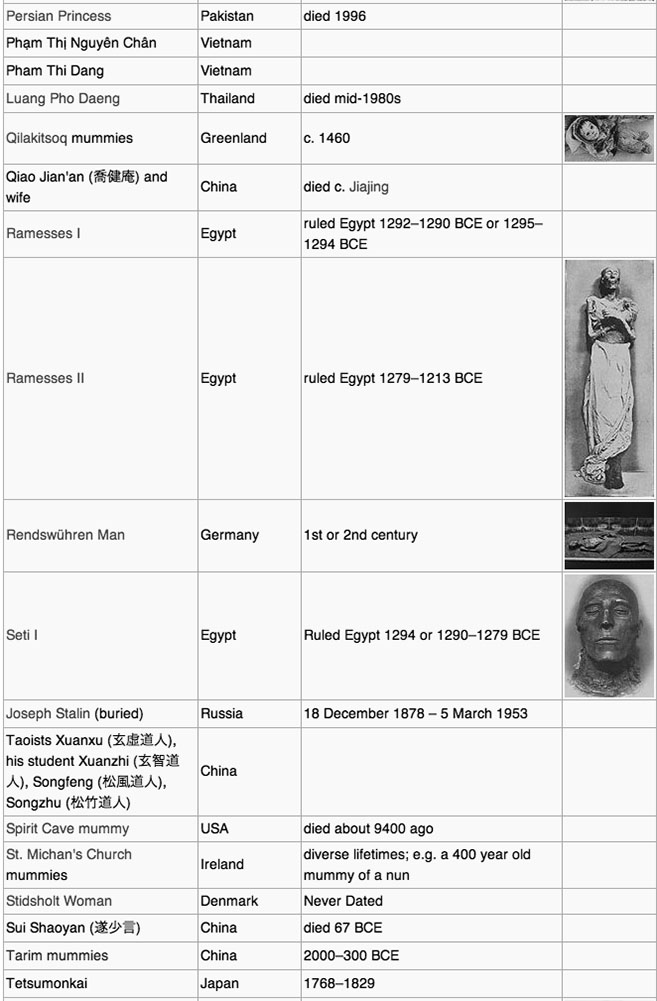 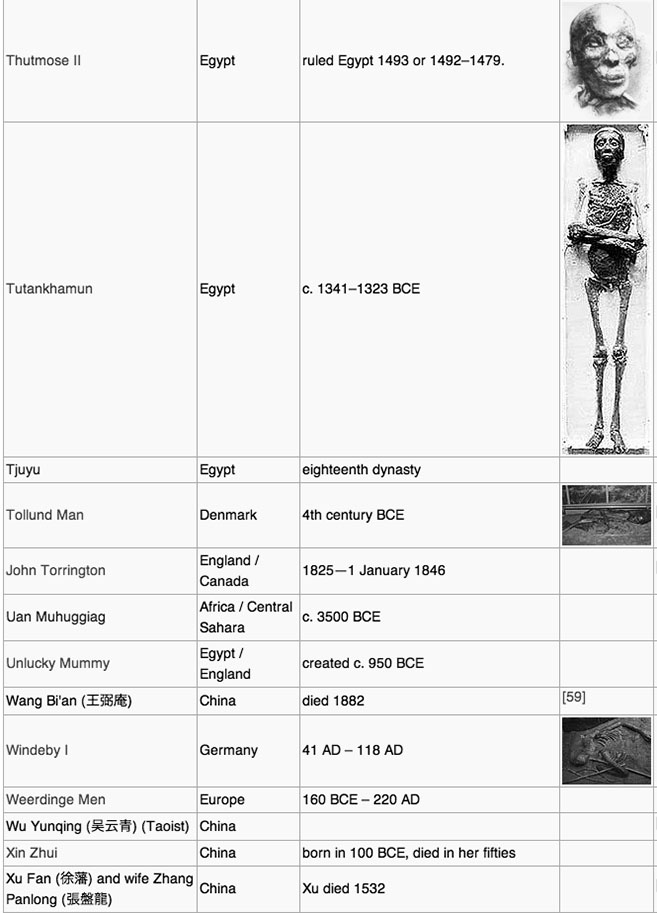 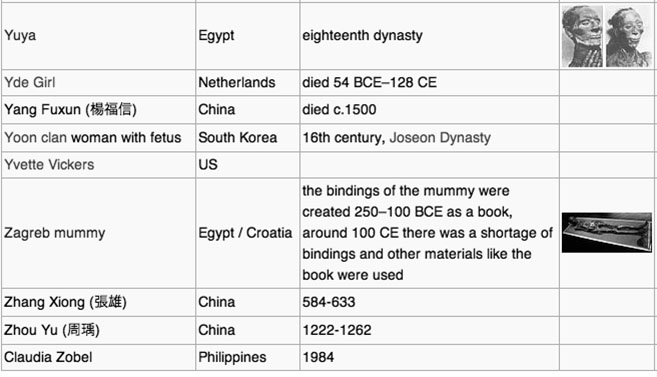