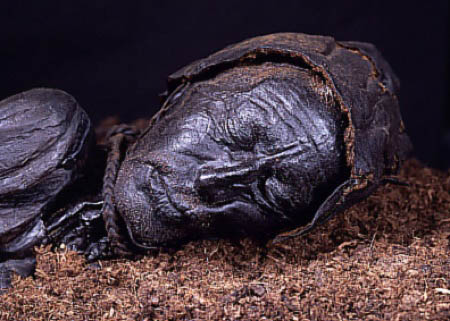 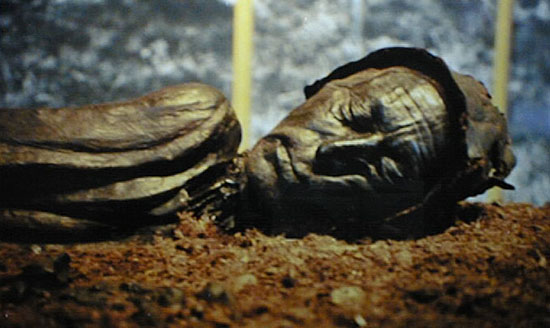 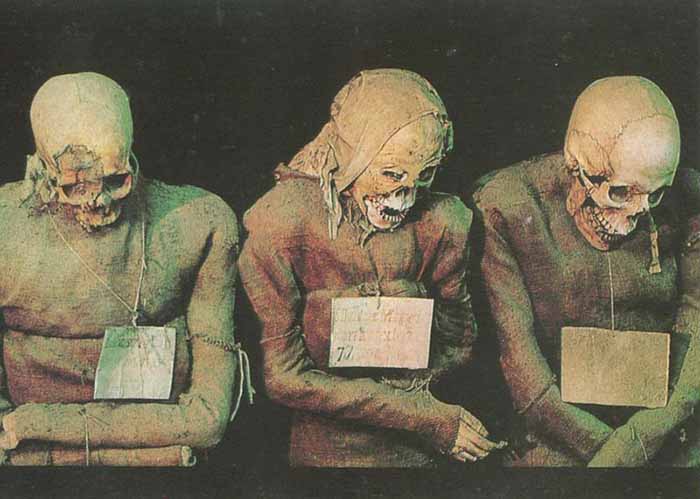 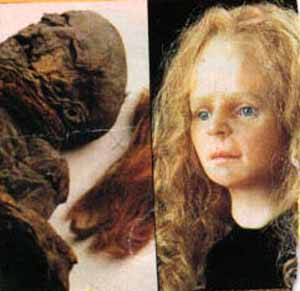 Yde Girl is a bog body found in the Stijfveen peat bog near the little village of Yde in the Netherlands. She was found on 12 May 1897 and was reputedly uncannily well-preserved when discovered (especially her hair), but by the time the body was turned over to the authorities a fortnight later it had been severely damaged and deteriorated.

Carbon 14 tests have indicated that Yde girl died between 54 BC and 128 AD at an approximate age of 16 years. She had long reddish blonde hair, but one side of her head had been shaved before she died. (Recent studies of Windeby I have suggested that the shaved hair phenomenon in some bog bodies may simply attest to one side of the head being exposed to oxygen slightly longer than the other.) Scans have shown that she suffered from a spine condition known as scoliosis.

The body was found clad in a woolen cape and with a noose wrapped around the neck suggesting she was executed or sacrificed. There was also a stab wound in her collarbone, but that was not determined as cause of death. As with most bog bodies, the skin and features are still preserved, thanks to the tannic acid in the marsh water. When Yde Girl was excavated, the diggers accidentally split her remains in half, effectively destroying her torso.

The Yde Girl was put on display at a museum and further study was not carried out on the remains until 1992. Professor Richard Neave of Manchester University took a CT-scan of the skull of Yde girl and determined her age, both anatomically and historically. The Yde girl became internationally known when Professor Neave made a reconstruction of her head, using techniques from plastic surgery and criminal pathology. Yde Girl and her modern reconstruction are displayed at the Drents Museum in Assen. 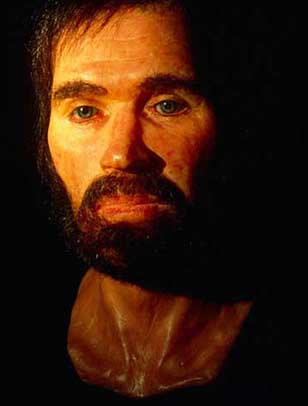 Lindow Man is the name given to the naturally-preserved bog body of an Iron Age man, discovered in a peat bog at Lindow Moss, Mobberley side of the border with Wilmslow, Cheshire, northwest England, on August 1, 1984 by commercial peat-cutters. At the time, the body was dubbed "Pete Marsh" (a pun on "peat marsh") by Middlesex Hospital radiologists which was then adopted by local journalists.

The body has been freeze dried for preservation and is now usually on display in the recently refurbished Gallery 50 of The British Museum, London. Its cabinet is the most climate controlled in the whole museum, and is so sensitive that even during recent renovations it was considered wiser to leave it boxed in a protective casing of hoardings than to take the risk of moving it. The body and associated objects will be loaned from the British Museum to form the exhibition "Lindow Man - a bog body mystery" at the Manchester Museum from 19 April 2008 - 19 April 2009.

Lindow Man has been Carbon-14 dated to sometime between 2 BCE and 119 CE. This bog body is most noted for the "triple death" overkill it suffered. The killing is supposed to have begun with three blows to the head, followed by one incision into his throat. Lastly, a knotted cord fitted tightly to the neck and twisted, was found around his neck. He was found face down in an already mature bog at Lindow Moss. This may be suggestive of a ritual "slaying" because the Celtic symbol for religion is the triplism which was made apparent in his "triple" death. Opinion is divided as to whether this was a human sacrifice, an execution or both. Details of the practice of human sacrifice among the Celts are debated, as all literary accounts were written by their enemies. There is also speculation that he was drowned, as water was found on his lung.

Lindow Man was discovered on May 13, 1984 by two men working the shredder for their peat cutting company in the English county of Cheshire. Andy Mould and Stephan Dooley were looking for large rocks or wood hidden amongst the peat when they spotted what appeared to be a piece of wood. Once they removed some of the peat still attached to it, they discovered what appeared to a human leg and contacted the police. The next few years would see more parts of Lindow Man's body being discovered including deteriorated arms, torso and his right foot in 1984 and then again in 1988 parts of his skin and his legs, buttocks and right thigh.

The bog's acidity had preserved the contents of his stomach: his last meal consisted largely of burnt cereal grains, wheat, bran, and barley, possibly identifying a sacrificial offering rather than an ordinary supper. The presence of mistletoe pollen in the victim's stomach is highly suggestive, given the many Druidical associations with mistletoe. Mistletoe is a poisonous plant known to cause convulsions, and is unlikely to have been ingested accidentally. The manner of death is also well-documented in later Celtic commentaries. However, as discussed by Gordon Hillman (1986) pollen found in his gut most likely represents pollen which was caught on the stigmas of flowering cereals, which was thereafter stored and eaten with the grain.

Dr Anne Ross has suggested that Lindow Man was a druid, as this would explain the evidence of minimal hard labour. She proposed that he was sacrificed, possibly at Beltain, after a symbolically burnt meal of grain bread. An alternative view is championed by the writer John Grigsby who suggested he met his death enacting the role of a dying and resurrecting fertility god, broadly akin to Attis or Osiris, a theory supported by the fact that chemical analysis of his skin seems to show that Lindow Man went to his death painted a suitably vegetal green colour.

The finding of Lindow Man was not the only instance of human remains being discovered in Lindow Moss. A fragment from another body, Lindow Woman, was previously discovered in the vicinity in 1983, when the same peat workers had uncovered a partially decomposed skull. The skull was determined to still have hair clinging to the scalp and the left eyeball still intact with pieces of the brain tissue still visible. Following the preliminary forensic report, the police concluded that the skull was that of a European female between the ages of 30 and 50, prompting a local man to confess to the murder of his wife some 20 years earlier.

Peter Reyn-Bardt confessed that he had indeed raped his wife, then killed and dismembered her, in the Lindow Moss bog. Subsequently, the Oxford University Research Laboratory for Archaeology carbon-dated the skull and determined that the skull was not that of a woman, but of a man who had died almost 2000 years earlier. Based on the strength of his confession, however, Mr. Reyn-Bardt was convicted of murder.

Lindow Woman is the name given to the partial remains of a female bog body, discovered in a peat bog at Lindow Moss, near Wilmslow, northwest England, on 13 May 1983 by commercial peat-cutters. The remains were a skull fragment, with soft tissue and hair attached. Police were called to investigate. For some years, a local man, Peter Reyn-Bardt, had been under suspicion of murdering his wife in the 1950s, and of disposing of her body. Thinking that the skull fragment came from his wife's body, Reyn-Bardt confessed to her murder, and was sent for trial at Chester Crown Court in December 1983. Carbon-14 dating of the skull fragment returned a date of 1740 ± 80BP (c.AD250). Reyn-Bardt was convicted of his wife's murder, even though no trace of her body was found. In 1984 the same bog yielded Lindow Man, the most complete bog body yet found in England. Read more ...

Mummies found in Outer Hebrides BBC - March 2003
The first mummies to be discovered in Britain have been found in the Outer Hebrides. Researchers believe islanders on South Uist started mummifying their dead at the same time as the ancient Egyptians. The ancient remains found beneath the floor of a Bronze Age roundhouse are believed to have been a girl aged three, a teenage girl, and a middle-aged man and woman. Analysis showed the 3,000-year-old-bodies had been preserved using naturally occurring acids and peat bogs. 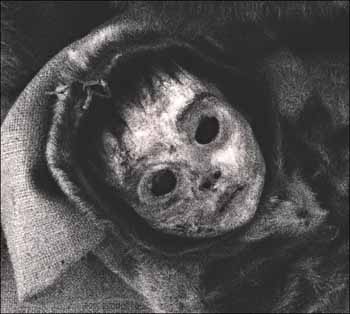 In 1972, eight remarkably preserved mummies were discovered at an abandoned Inuit settlement called Qilakitsoq, in Greenland. The "Greenland Mummies" consisted of a six-month old baby, a four year old boy, and six women of various ages, who died around 500 years ago. Their bodies were naturally mummified by the sub-zero temperatures and dry winds in the cave in which they were found. The oldest preserved mummy in North America is Kwaday Dan Ts'inchi ("Long ago person found" in the Southern Tutchone language of the Champagne and Aishihik First Nations), found in August 1999 by three First Nations hunters at the edge of a glacier in Tatshenshini-Alsek Park. It was determined that he had died about 550 years ago and that his preserved remains were the oldest ever discovered in North America. 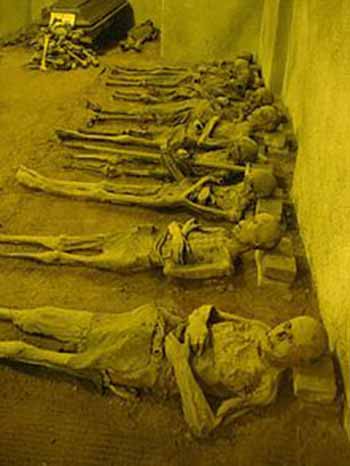 The Capuchin Crypt in Brno is a funeral room mainly for Capuchin friars. The crypt was founded in the mid 17th century in the basement of the Capuchin Monastery in the historical centre of Brno. The bodies of people buried there turned into mummies because of the geological composition of the ground and the system of airing.

The majority of mummies recovered in the Czech Republic come from underground crypts. While there is some evidence of deliberate mummification, most sources state that desiccation occurred naturally due to unique conditions within the crypts. The Capuchin Crypt in Brno contains three hundred years of mummified remains directly below the main altar.[49] Beginning in the 18th Century when the crypt was opened, and continuing until the practice was discontinued in 1787, the Capuchin monks of the monastery would lay the deceased on a pillow of bricks on the ground. The unique air quality and topsoil within the crypt naturally preserved the bodies over time. Approximately fifty mummies were discovered in an abandoned crypt beneath the Church of St. Procopius of S‡zava in Vamberk in the mid-1980s. Workers digging a trench accidentally broke into the crypt, which began to fill with waste water. The mummies quickly began to deteriorate, though thirty-four were able to be rescued and stored temporarily at the District Museum of the OrlickŽ Mountains until they could be returned to the monastery in 2000. The mummies range in age and social status at time of death, with at least two children and one priest. The majority of the Vamberk mummies date from the 18th century.

The Klatovy catacombs currently house an exhibition of Jesuit mummies, alongside some aristocrats, that were originally interred between 1674-1783. In the early 1930s, the mummies were accidentally damaged during repairs, resulting in the loss of 140 bodies. The newly updated airing system preserves the thirty-eight bodies that are currently on display.