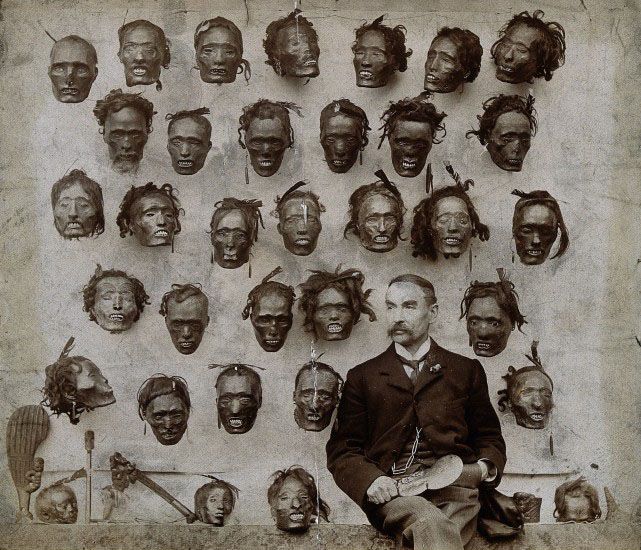 The aboriginal mummification traditions found in Australia are thought be related to those found in the Torres Strait islands, the inhabitants of which achieved a high level of sophisticated mummification techniques Australian mummies lack some of the technical ability of the Torres Strait mummies, however much of the ritual aspects of the mummification process are similar. Full-body mummification was achieved by these cultures, but not the level of artistic preservation as found on smaller islands. The reason for this seems to be for easier transport of bodies by more nomadic tribes.

Some Maori tribes from New Zealand would keep mummified heads as trophies from tribal warfare. They are also known as Mokomokai. In the 19th Century, many of the trophies were acquired by Europeans who found the tattooed skin to be a phenomenal curiosity. Westerners began to offer valuable commodities in exchange for the uniquely tattooed mummified heads. The heads were later put on display in museums, 16 of which being housed across France alone. In 2010, the Rouen City Hall of France returned one of the heads to New Zealand, despite earlier protests by the Culture Ministry of France.

There is also evidence that some Maori tribes may have practiced full-body mummification, though the practice is not thought to have been widespread. The discussion of Maori mummification has been historically controversial, with some experts in past decades claiming that such mummies have never existed. Contemporary science does now acknowledge the existence of full-body mummification in the culture. There is still controversy, however, as to the nature of the mummification process. Some bodies appear to be spontaneously created by the natural environment, while others exhibit signs of deliberate practices. General modern consensus tends to agree that there could be a mixture of both types of mummification, similar to that of the Ancient Egyptian mummies.

The mummies of the Torres Strait have a considerably higher level of preservation technique as well as creativity compared to those found on Australia. The process began with removal of viscera, after which the bodies were set in a seated position on a platform and either left to dry in the sun or smoked over a fire in order to aid in desiccation. In the case of smoking, some tribes would collect the fat that drained from the body to mix with ocher to create red paint that would then be smeared back on the skin of the mummy.The mummies remained on the platforms, decorated with the clothing and jewelry they wore in life, before being buried.

Mummies from the Oceania are not limited only to Australia. Discoveries of mummified remains have also been located in New Zealand, and the Torres Strait, though these mummies have been historically harder to examine and classify. Prior to the 20th Century, most literature on mummification in the region was either silent or anecdotal. However, the boom of interest generated by the scientific study of Egyptian mummification lead to more concentrated study of mummies in other cultures, including the Oceania.