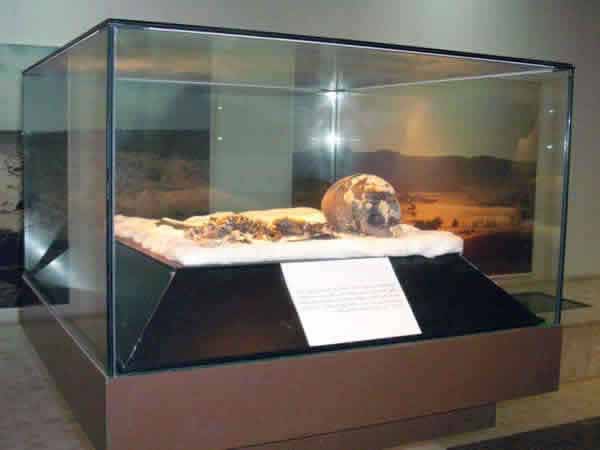 Uan Muhuggiag is a place in central Libyan Sahara, and the name of the mummy of a small boy found there in 1958 by Professor Fabrizio Mori. The mummy displays a highly sophisticated mummification technique, and at around 5,500 years old is older than any comparable Ancient Egyptian mummy.

The culture that produced the mummy were cattle herders, and occupied much of North Africa, at a time when the Sahara was a savannah. Possible links with later Egyptian culture have also been found, including the representation in rock art of dog-headed human figures (resembling Anubis), and a type of pottery decoration later found in the southern Nile valley.

The mummified remains of an infant were discovered during an expedition by archaeologist Fabrizio Mori to Libya during the winter of 1958-1959 in the natural cave structure of Uan Muhuggiag. After curious deposits and cave paintings were discovered on the surfaces of the cave, expedition leaders decided to excavate. Uncovered alongside fragmented animal bone tools was the mummified body of an infant, wrapped in animal skin and wearing a necklace made of ostrich egg shell beads. Professor Tongiorgi of the University of Pisa radiocarbon-dated the infant to between 5,000-8,000 years old. A long incision located on the right abdominal wall, and the absence of internal organs, indicated that the body had been eviscerated post-mortem, possibly in an effort to preserve the remains. A bundle of herbs found within the body cavity also supported this conclusion. Further research revealed that the child had been around 30 months old at the time of death, though gender could not be determined due to poor preservation of the sex organs.