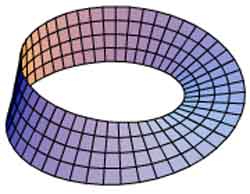 The Mobius Strip is a surface with only one side and only one boundary component. The Mobius strip has the mathematical property of being non-orientable. It can be realized as a ruled surface. It was discovered independently by the German mathematicians August Ferdinand Mobius and Johann Benedict Listing in 1858.

The shape of the Mobius Strip dates back to ancient times. An Alexandrian manuscript of early Alchemical diagrams contains an illustration with the visual proportions of the Mobius Strip. This image, on a page titled "The Chrysopoeia of Cleopatra", has the appearance of an Ouroboros, and is referred to as the "One, All".

A model can easily be created by taking a paper strip and giving it a half-twist, and then joining the ends of the strip together to form a loop. In Euclidean space there are in fact two types of Mobius strips depending on the direction of the half-twist: clockwise and counterclockwise. The Mobius strip is therefore chiral, which is to say that it has "handedness" (right-handed or left-handed, like amino acids)

A Mobius strip made with a piece of paper and tape. 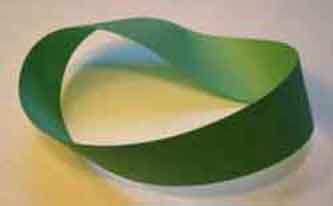 If an ant were to crawl along the length of this strip,
it would return to its starting point having traversed
every part of the strip without ever crossing an edge.

It is straightforward to find algebraic equations the solutions of which have the topology of a Mobius strip, but in general these equations do not describe the same geometric shape that one gets from the twisted paper model described above. In particular, the twisted paper model is a developable surface (it has zero Gaussian curvature). A system of differential-algebraic equations that describes models of this type was published in 2007 together with its numerical solution.

The Euler characteristic of the Mobius strip is zero.

A model can easily be created by taking a paper strip and giving it a half-twist, and then merging the ends of the strip together to form a single strip. In Euclidean space there are in fact two types of Mobius strips depending on the direction of the half-twist: clockwise and counterclockwise. The Mobius strip is therefore chiral, which is to say that it is "handed".

A model of a Mobius strip can be constructed by joining the ends of a strip of paper with a single half-twist. A line drawn starting from the seam down the middle will meet back at the seam but at the "other side". If continued the line will meet the starting point and will be double the length of the original strip of paper. This single continuous curve demonstrates that the Mobius strip has only one boundary.

If the strip is cut along the above line, instead of getting two separate strips, it becomes one long strip with two full twists in it, which is not a Mobius strip. This happens because the original strip only has one edge which is twice as long as the original strip of paper. Cutting creates a second independent edge, half of which was on each side of the knife or scissors. Cutting this new, longer, strip down the middle creates two strips wound around each other.

Other interesting combinations of strips can be obtained by making Mobius strips with two or more half-twists in them instead of one. For example, a strip with three half-twists, when divided lengthwise, becomes a strip tied in a trefoil knot. Cutting a Mobius strip, giving it extra twists, and reconnecting the ends produces unexpected figures called paradromic rings.

In terms of identifications of the sides of a square, as given above: the real projective plane is made by gluing the remaining two sides with 'consistent' orientation (arrows making an anti-clockwise loop); and the Klein bottle is made the other way. In graph theory, the Mobius ladder is a cubic graph closely related to the Mobius strip. 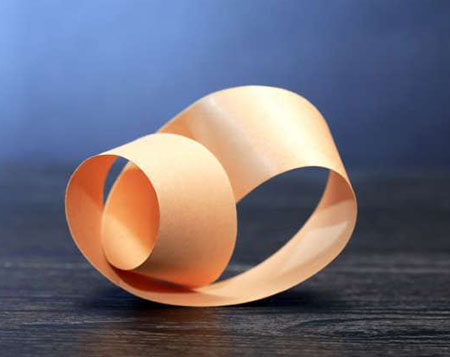 You have most likely encountered one-sided objects hundreds of times in your daily life - like the universal symbol for recycling, found printed on the backs of aluminum cans and plastic bottles. A Mobius strip can be created by taking a strip of paper, giving it an odd number of half-twists, then taping the ends back together to form a loop. If you take a pencil and draw a line along the center of the strip, you'll see that the line apparently runs along both sides of the loop. The concept of a one-sided object inspired artists like Dutch graphic designer M.C. Escher, whose woodcut "Mobius Strip II" shows red ants crawling one after another along a Mšbius strip.


Appearance in Science and Technology

There have been technical applications. Giant Mobius strips have been used as conveyor belts that last longer because the entire surface area of the belt gets the same amount of wear, and as continuous-loop recording tapes (to double the playing time). Mobius strips are common in the manufacture of fabric computer printer and typewriter ribbons, as they allow the ribbon to be twice as wide as the print head whilst using both half-edges evenly.

There have been several technical applications for the Mobius strip. Giant Mobius strips have been used as conveyor belts that last longer because the entire surface area of the belt gets the same amount of wear, and as continuous-loop recording tapes (to double the playing time). Mobius strips are common in the manufacture of fabric computer printer and typewriter ribbons, as they allow the ribbon to be twice as wide as the print head while using both half-edges evenly.

A device called a Mobius resistor is an electronic circuit element which has the property of canceling its own inductive reactance. Nikola Tesla patented similar technology in the early 1900s: "Coil for Electro Magnets" was intended for use with his system of global transmission of electricity without wires.

The international symbol for recycling is a Mobius loop.

The Mobius strip has provided inspiration both for sculptures and for graphical art. The artist M. C. Escher was especially fond of it and based several of his lithographs on it. One famous example, Mobius Strip II, features ants crawling around the surface of a Mobius strip.

It is also a recurrent feature in science fiction stories, such as Arthur C. Clarke's The Wall of Darkness.

Science fiction stories sometimes suggest that our universe might be some kind of generalized Mobius strip. In the short story "A Subway Named Mobius", by A.J. Deutsch, the Boston subway authority builds a new line, but the system becomes so tangled that it turns into a Mobius strip, and trains start to disappear. The Mobius strip also features prominently in Brian Lumley's Necroscope series of novels.

Medals, such as those awarded in competitions like the Olympics, often feature a neck ribbon configured as a Mobius strip. This allows the ribbon to fit comfortably around the neck while the medal lies flat on the chest.

The Mobius strip is the configuration space of two unordered points on a circle. Consequently, in music theory, the space of all two note chords, known as dyads, takes the shape of a Mobius strip; this and generalizations to more points is a significant application of orbifolds to music theory. Read more 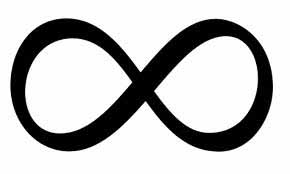