"Missing link" is a term for a transitional form from the fossil record that connects two different species to an earlier ancestor. The missing link may have features common to both species; for example an early avian fossil could have feathers much like a modern bird but still retain the bony tail and teeth of a dinosaur. This would be considered a missing link between dinosaurs and birds.

The missing link is a popular and not a scientific concept. Scientists studying the fossil record have long known that not every species that lived was 'lucky' enough to leave behind a fossil. More importantly, populations are constantly changing and species are statistical constructs and not ideal-types; therefore, there is not scientific meaning to the notion of a "transitional form."

This being said, a number of fossils exist that do indicate a link between earlier and later forms of animal. The lobe-finned fish Eusthenopteron is thought to be the first step towards land-dwelling amphibians; fossils of feathered dinosaurs in China seem to indicate that feathers were commonplace even before true birds evolved; and recently reexamined fossils of some amphibians have shown that some bones of these animals bear striking resemblances to those of fish. Read more 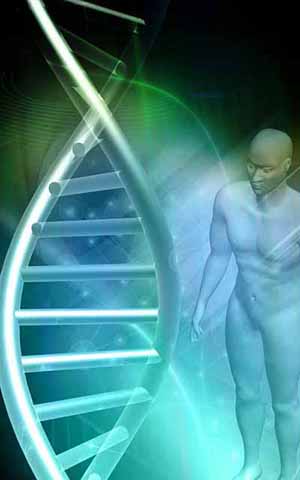 In the hologram of our reality, there is no missing link just inserts all part of a biogenetic experiment set in linear time to experience emotions.

Ancient Aliens Theorists believe we are a biogenetic experiment created by aliens that evolves through the creation the destruction of each root race. It all ends with n ice age or flood story.


South African fossils could be new hominid species   BBC - April 9, 2010
The remarkable remains of two ancient human-like creatures (hominids) have been found in South Africa. The fossils of a female adult and a juvenile male - perhaps mother and son - are just under two million years old. They were uncovered in cave deposits at Malapa not far from Johannesburg. Many scientists regard the Australopithecines as being directly ancestral to Homo but the precise placement of A. sediba in the human family tree is already proving controversial, with some scientists arguing the species may well be a Homo itself.


New species of early hominid found   PhysOrg - April 6, 2010
A previously unknown species of hominid that lived in what is now South Africa around two million years ago has been found in the form of a fossilized skeleton of a child and several bones of adults. The new species may be a transitional stage between ape-like hominids and Homo habilis, the first recognizably human ancestor of Homo sapiens. The skeleton and bones were discovered in the Sterkfontein area near Johannesburg by researchers from the University of the Witwatersrand. The team, led by Professor Lee Berger, were exploring the Malapa cave systems, in which an almost complete fossilized Australopithecus skeleton was discovered in 1994. The limestone caves are now a UNESCO world heritage site and an area that has been extensively excavated to unearth its paleontological treasures.


Scientists hail stunning fossil of a 47-million-year-old, lemur-like creature   BBC - May 19, 2009
The beautifully preserved remains of a 47-million-year-old, lemur-like creature have been unveiled in the US. The preservation is so good, it is possible to see the outline of its fur and even traces of its last meal. The fossil, nicknamed Ida, is claimed to be a "missing link" between today's higher primates - monkeys, apes and humans - and more distant relatives. But some independent experts, awaiting an opportunity to see the new fossil, are skeptical of the claim. And they have been critical of the hype surrounding the presentation of Ida. line (prosimians, such as lemurs), but is more related to the human evolutionary line (anthropoids, such as monkeys, apes and humans).


Common Ancestor Of Humans, Modern Primates? 'Extraordinary' Fossil Is 47 Million Years Old   Science Daily - May 19, 2009
In what could prove to be a landmark discovery, a leading paleontologist said scientists have dug up the 47 million-year-old fossil of an ancient primate whose features suggest it could be the common ancestor of all later monkeys, apes and humans.