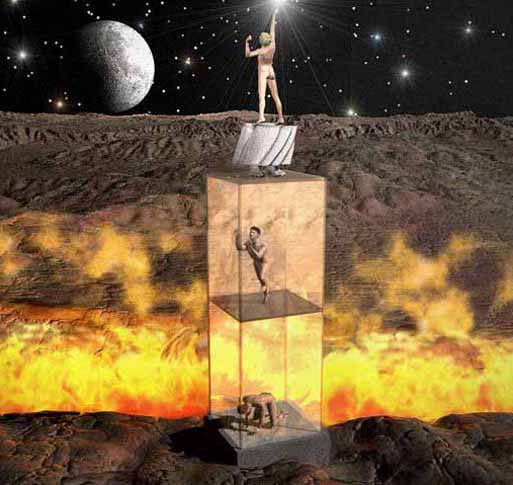 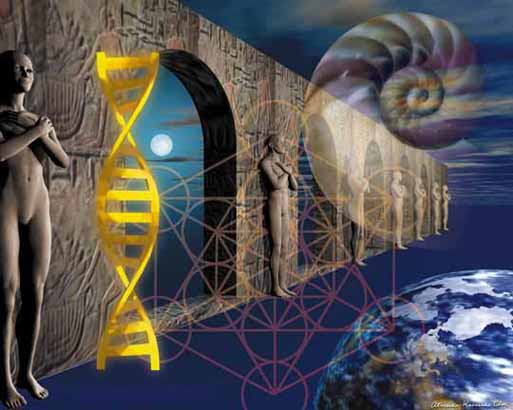 It's all a biogenetic experiment. 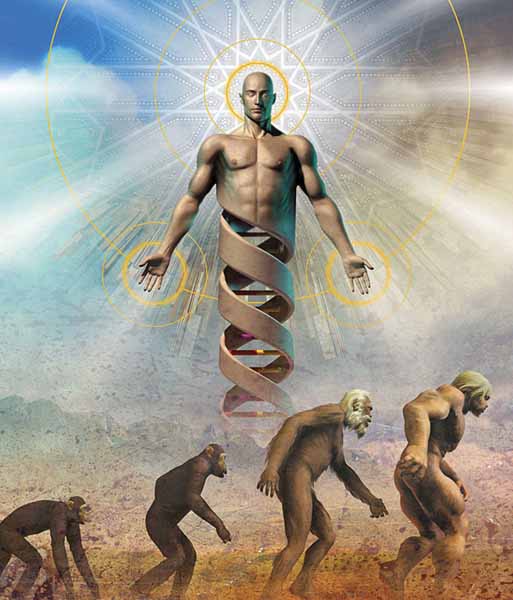 Human DNA contains the codes, or keys, of truth that explain how and why we experience as we do in this reality. In the never-ending quest to determine human origins, one finds answers in various fields of study. Below are current recent scientific findings.


Missing DNA helps make us human   PhysOrg - March 10, 2011
A new study demonstrates that specific traits that distinguish humans from their closest living relatives - chimpanzees, with whom we share 96 percent of our DNA - can be attributed to the loss of chunks of DNA that control when and where certain genes are turned on. The finding mirrors accumulating evidence from other species that changes to regulatory regions of DNA - rather than to the genes themselves - underlie many of the new features that organisms acquire through evolution.

Seeking specific genetic changes that might be responsible for the evolution of uniquely human traits, Howard Hughes Medical Institute investigator David Kingsley and colleagues at Stanford University scanned the human genome for features that set us apart from other mammals. The team found 510 segments that are present in chimps and other animals but missing from the human genome. Only one of the missing segments would actually disrupt a gene; the remaining 509 affect the DNA that surrounds genes, where regulatory sequences lie.

Careful analysis of a handful of these segments demonstrated that loss of regulatory DNA could explain how humans developed some features not found in other animals - such as big brains - as well as how they lost features common in other species, such as sensory whiskers and spiny penises. Their findings are published in the March 10, 2011, issue of the journal Nature.

Genes - segments of DNA that carry the blueprints for proteins - make up less than two percent of the human genome. Hidden within the remainder of our more than three billion base pairs of DNA are regulatory sequences that control when and where genes are expressed. Direct alterations to a gene can have dramatic effects, sometimes killing an organism or rendering it sterile. "In contrast, if you alter the way a gene turns on or off at a particular place in development, that can have a very large effect on a particular structure, but still preserve the other functions of the gene," Kingsley says. "That tends to be the sort of alternation that's favored when a new trait is evolving."

Kingsley's previous work with stickleback fish, a small spiny fish whose recent and rapid adaptation to a wide range of aquatic environments has made it ideal for evolutionary studies, have shown time and again that changes in regulatory DNA can have profound effects on an organism's traits. So when Kingsley and his colleagues searched for regions of the genome common to chimps, macaques, and mice but missing in the human genome, they weren't surprised that the sequence differences they found were almost exclusively outside of genes.

Collaborating with computational biologist Gill Bejerano's lab at Stanford, the team pinpointed 510 genetic sequences that appear in the genomes of chimps and other animals, but are "surprisingly missing" from the human genome, Kingsley says.

To narrow the list so that they could focus on the changes most likely to have altered when and where particular genes were expressed, the researchers conducted a computer analysis to identify deletions that were clustered around particular genes. "We saw more changes than you would expect near genes involved in steroid hormone signaling," Kingsley says. A number of deletions also appeared near genes involved in neural development, their analysis revealed.

But technology could only take the team so far. To zero in on specific deletions that might control human traits, the team relied on manpower: neuroscientists, physical anthropologists, developmental geneticists, and more. "We had a team of interested graduate students, postdocs, and developmental biologists poring through this list," Kingsley says. The team searched for sequences near genes known to play key roles in development, especially those known to control traits that differ between humans and other animals. "It was a fun detective hunt that led to lots of interesting discussions," he says.

The team came up with a couple dozen deletions near genes they suspected might be involved in the evolution of particular human traits. But the researchers still didn't know the normal functional roles of the missing sequences. So Kingsley and his colleagues isolated those genetic sequences from organisms that still had them (chimps or mice), attached the sequences to a reporter gene that produces a simple blue color reaction in living cells, and injected the resulting sequences into fertilized mouse eggs.

By monitoring the blue color reaction in developing mice, they could see exactly where and when the sequence was turning on gene expression during embryonic or postnatal development. This gave them a way to link "the biology of the gene, the molecular change that had happened in humans, and the specific anatomical place where it really was expressed during normal development," Kingsley explains.

These experiments highlighted two segments of DNA that humans lack, but that appear to play a particularly important role in development of mice and other non-human mammals. The first is a segment of DNA that, in most animals, occurs near the gene that codes for the androgen receptor, which is associated with a variety of male-specific traits. "Males have beards, females don't," Kingsley says. "That's an example of an androgen receptor-dependent process." When the researchers inserted this sequence into mouse eggs, "what we got were blue sensory whiskers and blue genitalia," Kingsley says, indicating that when present, the sequence causes the androgen receptor to be produced in those regions.

Tracing the expression of the protein through development, Kingsley and his colleagues concluded that the sequence contributes to the development of sensory whiskers found on the faces of many mammals, and prickly surface spines found on the penises of mice and many non-human primates.

Previous studies show that complete inactivation of the androgen receptor gene lead to defects in whiskers and failure to form penile spines. Although humans still retain the androgen receptor gene, the loss of regulatory information for expression in whiskers and spines could help explain two human-specific anatomical traits: absence of sensory whiskers and lack of spines on human penises. Loss of penile spines is one of several traits thought to be related to evolution of pair-bonding and monogamy in the human lineage.

The second segment of regulatory DNA they tested appears, in non-humans, near a gene called GADD45g. GADD45g normally reins in cell growth. In fact, Kingsley said, "if the gene is missing entirely, unchecked cell growth can cause pituitary tumors." When they injected the sequence into mouse eggs, they found the tell-tale blue color in a key growth layer of the developing brain -- indicating that in most animals, the regulatory sequence that has disappeared in humans restricts brain growth.

The study describes some of the changes that have helped make humans human, but there are likely to be many more, Kingsley says. "By simply changing a single gene like GADD45g you're not going to be able to explain all of human brain evolution."

Still, he adds, the study shows that "it's now possible to begin identifying some of the particular molecular changes that contribute to the evolution of human traits." Human-specific traits include not only anatomical and physiological differences, but also differences in our susceptibility to many diseases, such as arthritis, cancer, malaria, HIV, Alzheimer's, and Parkinson's. "We think that the same sorts of lists and approaches will eventually help illuminate human disease susceptibilities as well," he says. "It's a great time to be studying not only where we came from, but also how our genetic history shapes many aspects of current human biology."