A mirage, derived from the Latin mirari, meaning 'to be astonished', is an optical phenomenon which often occurs naturally. The kind most commonly seen (known as inferior mirage, because the inverted image lies below the upright one) is produced by the refraction of light when it passes into a layer of warm air lying close to a heated ground surface). This is an example of gradient index optics.

In deserts, mirages may give the appearance of a lake or other large body of water in the distance; this is actually an image of the sky being refracted back up from the warm air lying over the sand.

On tarmac roads, mirages give the impression that distant objects are being reflected by a puddle of water on the road. 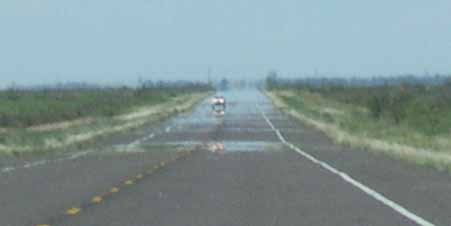 A highway mirage (also called all of an asphalt mirage, a hot road mirage and a road mirage) is often seen on hot roadways on sunny days. It is a type of inferior mirage, i.e., below the image's actual location.

The sun warms the black asphalt, heating the air above. Warm air is less dense than cool air, and the variation between the hot air at the surface of the road, and the denser cool air above it creates a gradient in the refractive index of the air. Light from the sky at a shallow angle to the road is refracted (bent) by the index gradient, making it appear to be located at the road's surface. The image of the sky resembles a pool of water on the road.

More spectacular mirages (superior mirages) are produced by a temperature inversion near eye level. In these, the inverted image lies above the upright one; and there may even be several alternating layers of upright and inverted images. These are known as the fata morgana.

A fata morgana, named after Morgan le Fay, the faery shapeshifting half-sister of King Arthur, is a mirage, an optical phenomenon which results from a temperature inversion. Objects on the horizon, such as islands, cliffs, ships or icebergs, appear elongated and elevated, like "fairy tale castles".

In calm weather, the undisturbed interface between warm air over cold dense air near the surface of the ground may act as a refracting lens, producing an upside-down image, over which the distant direct image appears to hover. Fata Morgana are usually seen in the morning after a cold night which has resulted in the radiation of heat into space. The first mention of 'Fata Morgana' in English, in 1818, referred to such a mirage noticed in the Strait of Messina, between Calabria and Sicily. It is common in high mountain valleys, such as the San Luis Valley of Colorado where the effect is exaggerated due to the curvature of the floor of the valley canceling out the curvature of the Earth. They may be seen in Arctic seas on very still mornings, or commonly on Antarctic ice shelves.

Abnormally large refraction of sunlight during sunrise or sunset can produce sunrises much earlier than predicted or sunsets much later than predicted. The conditions necessary for such refraction occurs most often, but not exclusively, in polar regions where strong surface temperature inversions can be geographically extensive and homogeneous. This mirage is often called a Novaya Zemlya mirage.

The Novaya Zemlya Effect is a polar mirage caused by high refraction of sunlight between atmospheric thermoclines. The Novaya Zemlya effect will give the impression that the sun is rising earlier than it actually should (astronomically speaking) and depending on the meteorological situation the effect will present the sun as a line or a square (which is sometimes referred to as the "rectangular sun"), made up of flattened hourglass shapes. The mirage requires rays of sunlight to have an inversion layer for hundreds of kilometres (at least 400 km). The mirage depends on the inversion layer's temperature gradient. The sunlight must bend to the Earth's curvature at least 400 km to allow an elevation rise of 5 degrees for sight of the sun disk.

The first person to observe (on island Novaya Zemlya) and describe the phenomenon was Gerrit de Veer, a member of Willem Barents' ill-fated third expedition into the polar region.

Scientists say it's a mirage, but others swear that when the weather is right, Clevelanders can see across Lake Erie and spot Canadian trees and buildings 50 miles away. Eyewitness accounts have long been part of the city's history. "The whole sweep of the Canadian shore stood out as if less than three miles away," a story in The Plain Dealer proclaimed in 1906.

"The distant points across the lake stood out for nearly an hour and then faded away. I can see how this could be possible," said Lawrence Krauss, chairman of the Physics Department at Case Western Reserve University. Krauss and Joe Prahl, chairman of the Mechanical and Aerospace Engineering Department at Case, said mirages can occur during an atmospheric inversion, in which a layer of cold air blankets the lake, topped by layers of increasingly warm air. When this happens, it can cause the light that filters through these layers from across the lake to bend, forming a lens that can create the illusion of distant objects. The scientists said the air has to be extremely calm for the mirage to appear. If the wind blows, it distorts or dissolves the image. Prahl and Krauss said such a mirage is rare.

Tom Schmidlin, a meteorologist in the Geography Department at Kent State University, said, "It's not terribly unusual. Sailors are always exposed to this kind of thing." Prahl, who regularly sails his 30-foot sloop Seabird from Cleveland to Canada, has never seen it.

Bob Boughner, a reporter for the Chatham Daily News in Ontario, said he's seen Cleveland from across Lake Erie twice, the first time four summers ago while driving along a road near the lake. He saw it again two summer ago while driving along the same road. All of a sudden, there was Cleveland, just off the Canadian shore, as if it were just across a river, he said. "I happened to look across the lake and, geez, I couldn't believe the sight," he said. "I could see the cars and the stoplights. I could even make out the different colors of the vehicles. It lasted a good two or three minutes." Boughner said he remembers his aunt Melba Bates, who lived all her life on Lake Erie and recently died in her late 90s, talking about being able to see Cleveland, but he didn't believe her. "I thought she was making up stories," he said. "But sure enough, I could see the same damned thing. When it shows up, it looks like you can touch it."

Mists rising on the shore 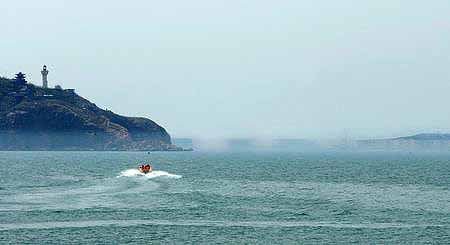 created an image of a city, with modern high-rise buildings, 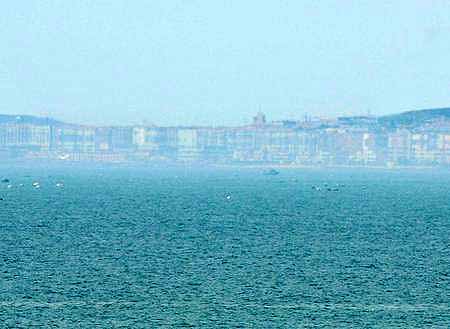 The city of Penglai had been soaked by two days of rain before the rare weather phenomenon occurred. The mirage took place during the week-long Labor Day holiday. The small city received over 30,000 tourists on Sunday. Experts said that many mirages have been recorded in Penglai, on the tip of Shandong Peninsula, throughout history, which made it known as a 'dwelling place of the gods.' They explained that a mirage is formed when moisture in the air becomes warmer than the temperature of sea water, which refracts rays of sunlight to create reflections of the landscape in the sky. 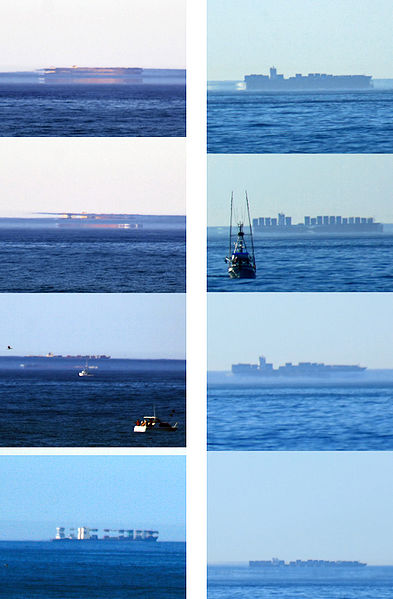 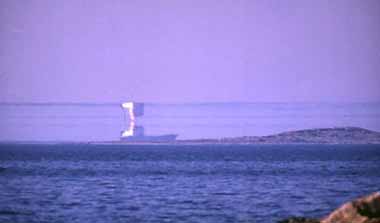