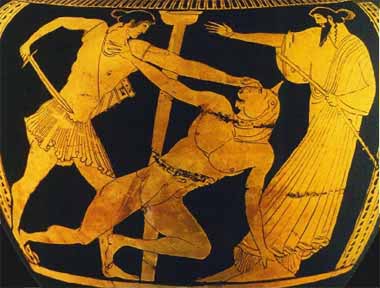 The Minotaur is half bull, half man. It was the most fearsome monster of ancient times. Its horns were sharp as knives, its great hooves could kick the life out the strongest of heroes, and its food was human flesh.

The Minotaur lived in the labyrinth, a great maze of winding passages on the island of Crete.

Each year seven youths and seven maidens were sent from Greece as food for the beast.

One year, Theseus, the greatest of the Greek heroes, said he would go to Crete and fight the monster.

"Let me go as one of the victims," he said to his father Aegeus. "I'll kill the Minotaur and free Greece from this peril."

Aegeus was unsure. He remembered how others had promised to slay the beast and had ended up dead.

Soon his ship was rigged with black sails, which was the custom when Greeks were sailing to meet their doom.

"Watch out when I return," said Theseus. "I will hoist white sails to show that I've succeeded." Theseus' ship arrived at the harbour of Knossos, near the palace of King Minos of Crete.

The king's daughter, Ariadne, saw the ship and met Theseus.

Soon the Greek hero and the beautiful Cretan girl fell in love.

When Theseus told Ariadne that he was going to kill the Minotaur, she decided she would help him. She knew that even a hero would get lost in the winding passages of the labyrinth. So she gave him a ball of thread.

"Unwind it as you go in, then you will be able to find your way out again by following the thread," she explained.

So Theseus entered the dark, winding labyrinth, undoing the thread as he went.

Soon he heard the bellowing beast, and as he walked on, the roars got louder and louder, until Theseus was at the centre of the maze and face to face with the monster.

Now the hero could see the glint in the beast's eyes. He could hear the rumble of its breathing. He could even feel the warmth of his breath as the creature crouched in its lair.

Theseus paused, waiting for the best moment to attack. As the creature turned his back, Theseus sprang, plunging his sword into the beast's flesh.

The Minotaur gave out one last bellow, and breathed its last. Theseus found his way out of the maze using Ariadne's thread and sailed quickly back to Greece to tell his father that he had succeeded.

But Theseus was so excited that he forgot to hoist his white sails. When Aegeus saw his son's ship rigged with the black sails he feared the worst.

The old man, despairing, flung himself from the cliff into the seas, and perished beneath the waves.

Theseus had won his victory but lost his father, and was sad at heart for many a long year. 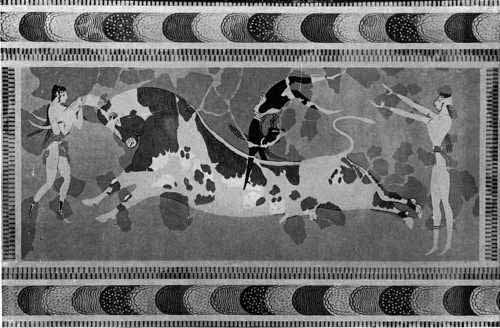 When the archaeologists uncovered the ruins at Knossos, they found the image above of young men jumping over a bull. Perhaps this was the origin of the myth of the Minotaur.