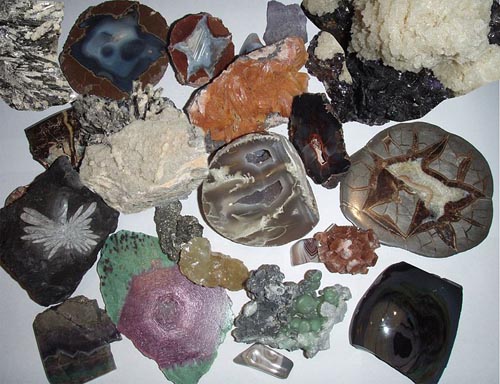 A mineral is a naturally occurring substance that is solid and stable at room temperature, representable by a chemical formula, usually abiogenic, and has an ordered atomic structure. It is different from a rock, which can be an aggregate of minerals or non-minerals and does not have a specific chemical composition. The exact definition of a mineral is under debate, especially with respect to the requirement a valid species be abiogenic, and to a lesser extent with regards to it having an ordered atomic structure. The study of minerals is called mineralogy.

There are over 4,900 known mineral species; over 4,660 of these have been approved by the International Mineralogical Association (IMA). The silicate minerals compose over 90% of the Earth's crust. The diversity and abundance of mineral species is controlled by the Earth's chemistry. Silicon and oxygen constitute approximately 75% of the Earth's crust, which translates directly into the predominance of silicate minerals. Minerals are distinguished by various chemical and physical properties. Differences in chemical composition and crystal structure distinguish various species, and these properties in turn are influenced by the mineral's geological environment of formation. Changes in the temperature, pressure, and bulk composition of a rock mass cause changes in its mineralogy; however, a rock can maintain its bulk composition, but as long as temperature and pressure change, its mineralogy can change as well.Read more ...

Mysterious Mineral Only Ever Seen in Meteorites Inexplicably Found by The Dead Sea   Science Alert - June 30, 2021
A very rare mineral that's previously been found only in extraterrestrial meteorites has been discovered in Earth's own rocks for the first time, lying in a sedimentary formation not far from the shores of the Dead Sea 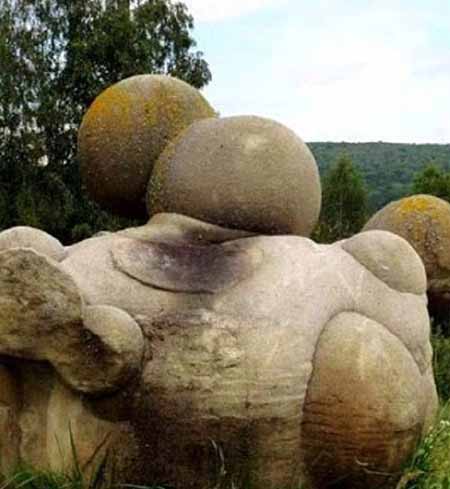 These stones have long intrigued locals, with their organic-looking shapes and strange cement oozings, inspiring myths about the stones' ability to grow and move - like living beings rather than inanimate objects.


Researchers found a brand new mineral tucked in a tiny meteorite. It's never been seen in nature before   CNN - December 26, 2019
Between 2015 and 2019, researchers discovered 31 new carbon minerals, most of them vividly colorful. Edscottite is one of the least flashy new finds, but it's also the one that's set geologists abuzz. Edscottite is one of the phrases iron goes through when it's cooling down from a high temperature, as it is smelted into steel. But the edscottite discovered in a tiny meteorite and officially named this year is the first to occur in nature. The Wedderburn meteorite's been sitting in Museums Victoria in Australia since it was found nearby in 1951, and researchers have sliced it open to search its contents just as long. We have discovered 500,000 to 600,000 minerals in the lab, but fewer than 6,000 that nature's done itself.


Rare Mineral Discovered in Ancient Meteorite Impact Crater   Live Science - November 3, 2014
A rare mineral known from just three massive meteorite impacts has now turned up in a Wisconsin crater. Researchers discovered the mineral, called reidite, at the Rock Elm impact structure in western Wisconsin. Reidite is a dense form of zircon, one of the hardiest minerals on Earth. This is the oldest reidite ever found,, said Aaron Cavosie, a geochemist at the University of Puerto Rico in Mayaguez. The Rock Elm meteorite crater is 450 million to 470 million years old, he said.


Earth's Most Abundant, But Hidden Mineral Finally Seen, Named   Live Science - June 16, 2014
Earth's most abundant mineral lies deep in the planet's interior, sealed off from human eyes. Now, scientists for the first time have gotten a glimpse of the rock, enclosed inside a 4.5-billion-year-old meteorite. The result: They have characterized and named the elusive mineral. The new official name, bridgmanite, was approved for the rock formerly known by its chemical components - silicate-perovskite. The magnesium-silicate mineral was named after Percy Bridgman, a 1946 Nobel Prize-winning physicist.


Mineral hints at bright blue rocks deep in the Earth   BBC - March 12, 2014
Minerals preserved in diamond have revealed hints of the bright blue rocks that exist deep within the Earth.They also provide the first direct evidence that there may be as much water trapped in those rocks as there is in all the oceans. The diamond, from central-west Brazil, contains minerals that formed as deep as 600km down and that have significant amounts of water trapped within them.


Rare Diamond Reveals Earth's Interior is All Wet   Live Science - March 12, 2014
A battered diamond that survived a trip from "hell" confirms a long-held theory: Earth's mantle holds an ocean's worth of water. "It's actually the confirmation that there is a very, very large amount of water that's trapped in a really distinct layer in the deep Earth," said Graham Pearson, lead study author and a geochemist at the University of Alberta in Canada. The worthless-looking diamond encloses a tiny piece of an olivine mineral called ringwoodite, and it's the first time the mineral has been found on Earth's surface in anything other than meteorites or laboratories. Ringwoodite only forms under extreme pressure, such as the crushing load about 320 miles (515 kilometers) deep in the mantle.


4.5-Billion-Year-Old Antarctic Meteorite Yields New Mineral   Live Science - April 6, 2011
A meteorite discovered in Antarctica in 1969 has just divulged a modern secret: a new mineral, now called Wassonite. The new mineral found in the 4.5-billion-year-old meteorite was tiny - less than one-hundredth as wide as a human hair. Still, that was enough to excite the researchers who announced the discovery Tuesday (April 5). 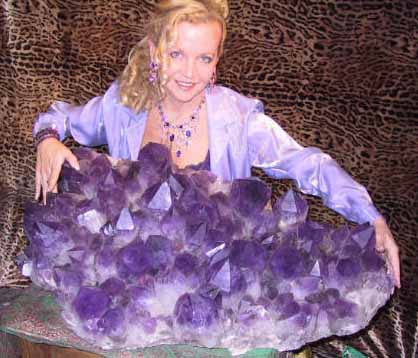