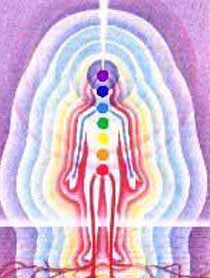 One of the first things you learn in metaphysics and psychology is the connection between the Subtle Bodies - body, mind and soul - and how they interact with each other. Reality is a consciousness hologram. One's programming is created at the soul level, then experienced at the emotional level, and finally manifest at the physical level as one discovers their programming for experience in this reality. This pattern is consistent in all sentient life forms. It is all processed by the brain which is nothing more than a computer or electrochemical machine. 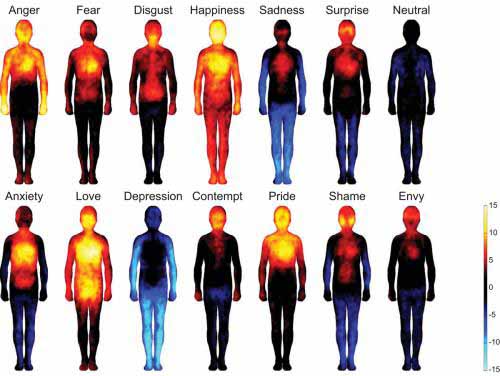 Many phrases reflect how emotions affect the body: Loss makes you feel "heartbroken," you suffer from "butterflies" in the stomach when nervous, and disgusting things make you "sick to your stomach."

Now, a new study from Finland suggests connections between emotions and body parts may be standard across cultures. The researchers coaxed Finnish, Swedish and Taiwanese participants into feeling various emotions and then asked them to link their feelings to body parts. They connected anger to the head, chest, arms and hands; disgust to the head, hands and lower chest; pride to the upper body; and love to the whole body except the legs. As for anxiety, participants heavily linked it to the mid-chest.

"The most surprising thing was the consistency of the ratings, both across individuals and across all the tested language groups and cultures," said study lead author Lauri Nummenmaa, an assistant professor of cognitive neuroscience at Finland's Aalto University School of Science.

However, one U.S. expert, Paul Zak, chairman of the Center for Neuroeconomics Studies at Claremont Graduate University in California, was unimpressed by the findings. He discounted the study, saying it was weakly designed, failed to understand how emotions work and "doesn't prove a thing."

But for his part, Nummenmaa said the research is useful because it sheds light on how emotions and the body are interconnected. "We wanted to understand how the body and the mind work together for generating emotions," Nummenmaa said. "By mapping the bodily changes associated with emotions, we also aimed to comprehend how different emotions such as disgust or sadness actually govern bodily functions."

For the study, published online Dec. 30 in Proceedings of the National Academy of Sciences, the researchers showed two silhouettes of bodies to about 700 people. Depending on the experiment, they tried to coax feelings out of the participants by showing them emotional words, stories, clips from movies and facial expressions. Then the participants colored the silhouettes to reflect the body areas they felt were becoming most or least active. The idea was to not mention emotions directly to the participants but instead to make them "feel different emotions," Nummenmaa said.

The researchers noted that some of the emotions may cause activity in specific areas of the body. For example, most basic emotions were linked to sensations in the upper chest, which may have to do with breathing and heart rate. And people linked all the emotions to the head, suggesting a possible link to brain activity.

But Zak said the study failed to consider that people often feel more than one emotion at a time. Or that a person's own comprehension of emotion can be misleading since the "areas in the brain that process emotions tend to be largely outside of our conscious awareness," he said.

It would make more sense, Zak said, to directly measure activity in the body, such as sweat and temperature, to make sure people's perceptions have some basis in reality. Nummenmaa said he expects future research to go in that direction.

How might the current research be useful? Zak is skeptical that it could be, but the study lead author is hopeful. "Many mental disorders are associated with altered functioning of the emotional system, so unraveling how emotions coordinate with the minds and bodies of healthy individuals is important for developing treatments for such disorders," Nummenmaa said.

Next, the researchers want to see if these emotion-body connections change in people who are anxious or depressed. "Also, we are interested in how children and adolescents experience their emotions in their bodies," Nummenmaa said.