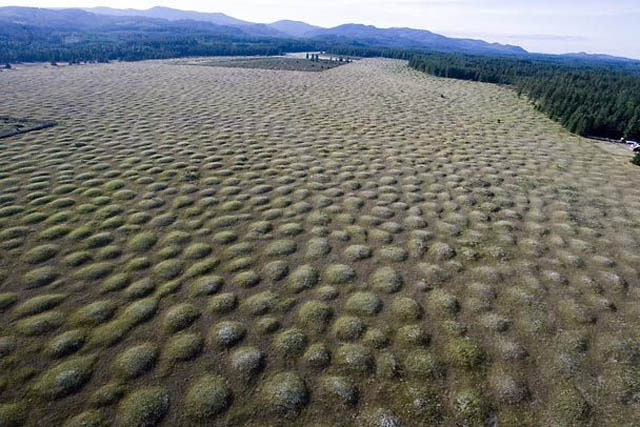 Mima mounds are low, flattened, circular to oval, domelike, natural mounds that are composed of loose, unstratified, often gravelly sediment that is an overthickened A Horizon. These mounds range in diameter from 3 to more than 50 m; in height 30 cm to greater than 2 m; and in density from several to greater than 50 mounds per hectare, at times forming conspicuous natural patterns. Mima mounds can be seen at the Mima Mounds Natural Area Preserve in Washington State.

Theories for the origin of Mima mounds include burrowing by pocket gophers; accumulation of wind-blown (aeolian) sediments around vegetation to form coppice dunes or nebkhas; seismic ground shaking by major earthquakes, though none have been observed to form Mima mounds; and shrinking and swelling of clays in hog-wallow or gilgai landforms.

Though the definitive Mima mounds are common in North America, it has not been shown that all North American mounds result from the same causes. Similar or at least reminiscent phenomena occur on all continents and the proposed causes do not occur in all regions that have been studied. Nor is it clear that all such mounds really are the same, either physically or functionally; for example, the so-called fairy circles of Southern Africa tend to be less mound-like and occur in different climatic and ecological conditions. Furthermore, it has been argued that the possibly distinct heuweltjies of the South Western Cape region of South Africa are of an origin far different from either.

Excavations made into the Washington mounds show that underneath a blanket of prairie grass lies a mixture of loose sand, fine gravel, and decayed plants. Not all mima mound features have the same structure though. One mound in Washington had a very complex soil profile: A horizon is a black sandy loam (due to charcoal content from aboriginal burning on the prairies), B horizon is a gravelly sandy loam, C horizon is an extremely gravelly sand. Read more ... 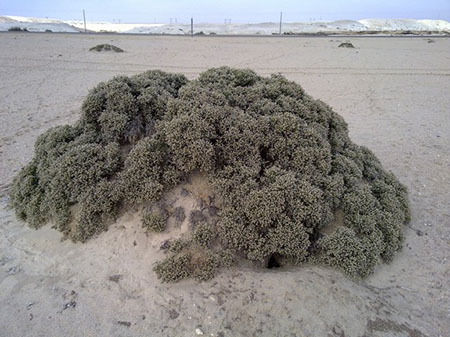 These earthen mounds have been identified on every continent except Antarctica. Mounds called nabkhas or coppice dunes form in semi-arid regions, forming when wind deposits sand around shrubs and clumps of vegetation. Here, a coppice dune near Swakopmund, Namibia.